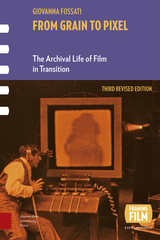 BUY
From Grain to Pixel: The Archival Life of Film in Transition, Third Revised Edition
by Giovanna Fossati
Amsterdam University Press, 2018
eISBN: 978-90-485-4352-6
In From Grain to Pixel, Giovanna Fossati analyzes the transition from analog to digital film and its profound effects on filmmaking and film archiving. Reflecting on the theoretical conceptualization of the medium itself, Fossati poses significant questions about the status of physical film and the practice of its archival preservation, restoration, and presentation. From Grain to Pixel attempts to bridge the fields of film archiving and academic research by addressing the discourse on film's ontology and analyzing how different interpretations of what film is affect the role and practices of film archives. By proposing a novel theorization of film archival practice, Fossati aims to stimulate a renewed dialogue between film scholars and film archivists.Almost a decade after its first publication, this revised edition covers the latest developments in the field. Besides a new general introduction, a new conclusion, and extensive updates to each chapter, a novel theoretical framework and an additional case study have been included.
AUTHOR BIOGRAPHY
Giovanna Fossati is the chief curator of Eye Filmmuseum and professor of Film Heritage and Digital Film Culture at the University of Amsterdam.
TABLE OF CONTENTS