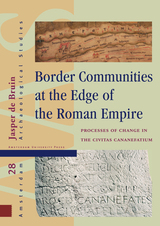 Border Communities at the Edge of the Roman Empire: Processes of Change in the Civitas Cananefatium
by Jasper de Bruin
Amsterdam University Press, 2019
eISBN: 978-90-485-4386-1
In Roman times, the area between the Lower Rhine and the Meuse in the present day province of South Holland in the Netherlands, was known as the administrative district of the community of the Cananefates (the civitas Cananefatium). The formation of this community, as well as the changes that took place within this group, were researched by means of a systematic analysis of the archaeological remains. In order to understand the role of the Roman state in these processes, the urban and military communities were also studied. In this way an overview was created of an administrative region in which aspects such as the interaction between the different groups, the character of the rural community and the differences with other rural groups along the borders of the Roman Empire could be studied.
AUTHOR BIOGRAPHY
Dr. Jasper de Bruin (1976) graduated in Archaeology of the Roman period at the University of Amsterdam and started working as a lecturer at Leiden University in 2006, where he completed his Ph.D. thesis in 2017. Currently, he is employed as assistant professor at Leiden University, where he teaches about and researches the Roman period in Northwestern Europe.
TABLE OF CONTENTS


Acknowledgements1. Introduction1.1 The Cananefates1.2 Theme, aims and main research questions1.3 Rural versus Roman1.4 Migration and ethnogenesis1.5 Becoming Roman?1.6 Returning auxiliary veterans1.7 Community1.8 Research history and strategy1.9 Structure of the text2 . Landscape and habitation2.1 Brief geological history of the area from the Iron Age to the beginning of the Roman period2.2 The landscape according to historical sources2.3 The landscape according to geological and archaeological sources2.4 The 'Woudgronden' ('Forest soils')2.5 Post-Roman erosion and disturbances2.6 Perception of the landscape2.7 The settlements2.8 Administrative division of the area3 . The Roman military community3.1 Development of the limes3.2 Military structures along the limes3.3 Secondary military structures along the limes3.4 Military Infrastructure3.5 Rural settlements in the limes zone3.6 Military structures in the coastal area south of the limes3.7 The military economy3.8 The military community: a synthesis4 . The urban community4.1 Roads4.2 The administrative center in Voorburg4.3 The urban community5 . The rural community5.1 Introduction5.2 The Late Iron Age (250 BC - 1AD)5.3 A habitation hiatus?5.4 New inhabitants in the 1st century5.5 The rural settlements between 50 and 275/3005.6 Burials and cemeteries5.7 Religion5.8 Ditch systems, dams, and culverts5.9 The rural economy5.10 The end of the rural habitation5.11 Continuity into the Early Middle Ages5.12 The rural community6 . Synthesis6.1 The first half of the 1st century6.2 The second half of the 1st century6.3 The first half of the 2nd century6.4 The second half of the 2nd century6.5 The first half of the 3rd century6.6 The second half of the 3rd century6.7 The 4th century and later6.8 Synopsis7 . ConclusionsBibliographyAbbreviationsReferencesClassical sourcesModern sourcesAppendix 1. Roman period settlements in the research areaMapsMap 1: Settlements, plotted onto a topographical mapMap 2: Detail of the south-western part of the research area, with a cluster of settlements, plotted onto a topographical map of the research area