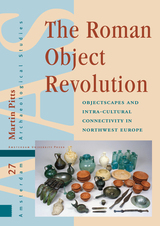 BUY
The Roman Object Revolution: Objectscapes and Intra-Cultural Connectivity in Northwest Europe
by Martin Pitts
Amsterdam University Press, 2019
eISBN: 978-90-485-4387-8
Archaeologists working in northwest Europe have long remarked on the sheer quantity and standardisation of objects unearthed from the Roman period, especially compared with earlier eras. What was the historical significance of this boom in standardised objects? With a wide and ever-changing spectrum of innovative objects and styles to choose from, to what extent did the choices made by people in the past really matter? To answer these questions, this book sheds new light on the make-up of late Iron Age and early Roman ‘objectscapes’, through an examination of the circulation and selections of thousands of standardised pots, brooches, and other objects, with emphasis on funerary repertoires, c. 100 bc-ad 100. Breaking with the national frameworks that inform artefact research in much ‘provincial’ Roman archaeology, the book tests the idea that marked increases in the movement of people and objects fostered pan-regional culture(s) and transformed societies. Using a rich database of cemeteries and settlements spanning a swathe of northwest Europe, including southern Britannia, Gallia Belgica, and Germania Inferior, the study extensively applies multivariate statistics (such as Correspondence Analysis) to examine the roles of objects in an ever-changing and richly complex cultural milieu.
AUTHOR BIOGRAPHY
Martin Pitts is Associate Professor in Roman Archaeology at the University of Exeter. His research deals with late Iron Age and early Roman northwest Europe, with emphasis on the consumption and circulation of objects (especially pottery), and how these can inform understandings of historical globalising processes. He is co-author of several books and articles, including Alien Cities: Consumption and the origins of urbanism in Roman Britain (with Dominic Perring, 2013), Globalisation and the Roman World (with Miguel John Versluys, 2015), and Materialising Roman Histories (with Astrid Van Oyen, 2017).
TABLE OF CONTENTS