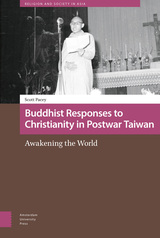 BUY
Buddhist Responses to Christianity in Postwar Taiwan: Awakening the World
by Scott Pacey
Amsterdam University Press, 2020
eISBN: 978-90-485-4442-4
After the Communist victory in China’s civil war, Taiwan“then governed by the KMT (or Nationalist Party)“became a focal point for both Buddhist and Christian activity in the Chinese world. Focusing on some of the most influential monastics of the time, this study considers Buddhist responses to Christianity during its subsequent period of growth on the island. Drawing on Buddhist and Christian publications, it shows that interfaith competition, and political context, are important in shaping religious identity and driving the religious engagement with modernity. Buddhist Responses to Christianity in Postwar Taiwan: Awakening the World will be of interest to historians of Buddhism, Chinese religion and Taiwanese society, and to those with an interest in interfaith dialogue more generally.
AUTHOR BIOGRAPHY
Dr Scott Pacey is an Assistant Professor in the School of Sociology and Social Policy at the University of Nottingham.
TABLE OF CONTENTS