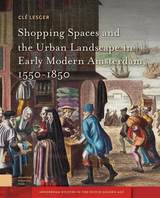 Shopping Spaces and the Urban Landscape in Early Modern Amsterdam, 1550-1850
by Clé Lesger
Amsterdam University Press, 2020
eISBN: 978-90-485-5005-0
In this study, the appearance and location of shops in Amsterdam during the early modern period is linked to major changes in the urban economy, the size and socio-spatial distribution of its population, and the structure of the urban grid. Not only is there ample attention for the spatial distribution of shops across the urban landscape, but for the first time it is also accurately charted what the exterior and interior of Amsterdam shops looked like and how they changed in the course of the centuries. Partly as a result of this, it has proved possible to give an impression of the ways in which retailers and customers interacted.
AUTHOR BIOGRAPHY
Clé Lesger (Amsterdam 1956) is an associate professor of economic and social history at the University of Amsterdam. His recent fields of interest are urban history in general, the retailing industry, and patterns of land-use and residential segregation in early modern and modern cities. Recently he published a history of retailing in Amsterdam (1550-2000) and co-edited with Jan Hein Furnée The Landscape of Consumption. Shopping Streets and Cultures in Western Europe, 1600-1900 (Palgrave 2014).
TABLE OF CONTENTS