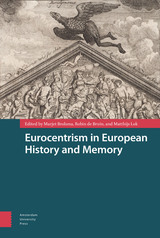 BUY
Eurocentrism in European History and Memory
edited by Marjet Brolsma, Robin de Bruin and Marjet Lok
Amsterdam University Press, 2019
eISBN: 978-90-485-5055-5
Eurocentrism means seeing the world in Europe’s terms and through European eyes. This may not be unreasonable for Europeans, but there are unforeseen consequences. Eurocentric history implies that a scientific modernity has diffused out from Europe to benefit the rest of the world, through colonies and development aid. It involves the imposition of European norms on places and times where they are often quite inappropriate. In Eurocentrism in European History and Memory, well-known scholars explore and critically analyse manifestations of Eurocentrism in representations of the European past from different disciplines — history, literature, art, memory and cultural policy — as well as from different geographical perspectives. The book investigates the role imaginings of the European past since the eighteenth century played in the construction of a Europeanist worldview and the ways in which ‘Europe’ was constructed in literature and art.
AUTHOR BIOGRAPHY
[Marjet Brolsma](https://www.uva.nl/profiel/b/r/m.brolsma/m.brolsma.html) is Assistant Professor of European Cultural History at the University of Amsterdam.[Robin de Bruin](https://www.uva.nl/profiel/b/r/r.j.debruin/r.j.debruin.html) is Assistant Professor of European Studies at the University of Amsterdam, with a current research focus on the relationship between decolonization and European integration. He lectures on Modern European History, including European integration.[Matthijs Lok](https://www.uva.nl/profiel/l/o/m.m.lok/m.m.lok.html) is Assistant Professor of Modern European History at the University of Amsterdam.
TABLE OF CONTENTS