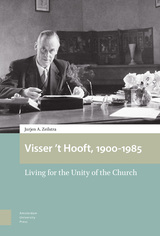 
Introduction: The Importance and Limitations of a Biography-1 Subject and Background-2 Existing Biographies-3 Method1 The World Opens Up, 1900-19242 The School of International Encounter: Working with Youth and Students, 1924-19393 Church Unity in Wartime, 1939-19454 From 'Spiritual Contact' to Political Involvement: The Swiss Road, 1942-19445 Towards a World Council of Churches: Reconciliation and Restoration, 1945-19486 General Secretary of the World Council of Churches, 1948-19667 The Cold War, the Unity of the Church and Eastern Orthodoxy, 1948-19668 Roman Catholic Contacts: 'Nostra Res Agitur', 1948-19699 Obsolete Institutionalism? The Twilight Years, 1966-198510 In the Mirror of Rembrandt and the Perspectives of OthersTaking Stock: An Assessment of a Life Lived for the Unity of the Church Sources and Literature Consulted-1 Archives and Unpublished Primary Sources -2 Oral Sources -3 Digital Sources -4 Published and Unpublished Works by W.A. Visser 't Hooft -5 Published Sources and Secondary Literature 6 Newspapers and Magazines *A - Persons Quoted*B - Other References Index