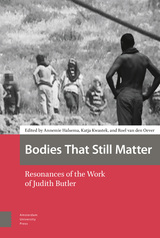 Bodies That Still Matter: Resonances of the Work of Judith Butler
edited by Annemie Halsema, Katja Kwastek and Roel van den Oever
Amsterdam University Press, 2021
eISBN: 978-90-485-5250-4
Since the appearance of her early-career bestseller Gender Trouble in 1990, American philosopher Judith Butler is one of the most influential (and at times controversial) thinkers in academia. Her work addresses numerous socially pertinent topics such as gender normativity, political speech, media representations of war, and the democratic power of assembling bodies. The volume Bodies That Still Matter: Resonances of the Work of Judith Butler brings together essays from scholars across academic disciplines who apply, reflect on, and further Butler's ideas to their own research. It includes a new essay by Butler herself, from which it takes its title. Organized around four key themes in Butler's scholarship - performativity, speech, precarity, and assembly - the volume offers an excellent introduction to the contemporary relevance of Butler's thinking, a multi-perspectival approach to key topics of contemporary critical theory, and a testimony to the vibrant interdisciplinary discourses characterizing much of today's humanities' research.
AUTHOR BIOGRAPHY
Annemie Halsema is associate professor of philosophy at Vrije Universiteit Amsterdam. Her research focuses on personal identity and embodiment in French phenomenology, hermeneutics and in feminist philosophy. She wrote two books on Luce Irigaray (in Dutch 1998, and Luce Irigaray and Horizontal Transcendence 2000), edited several volumes, among which a Dutch translation of Judith Butler's essays (Genderturbulentie, 2000) and Feminist Explorations of Paul Ricoeur's Philosophy (with Henriques, 2016).

Katja Kwastek is professor of modern and contemporary art history at Vrije Universiteit Amsterdam. Her research focuses on processual, digital and post-digital art, in the broader contexts of art history, media aesthetics, and the environmental humanities. She has published and edited many books and essays, including Ohne Schnur. Art and Wireless Communication (Revolver, 2004), Aesthetics of Interaction in Digital Art (MIT Press, 2013), and a special issue of the Journal of the Association for the Study of the Arts of the Present on 'Slowness' (2019). She is one of the co-founders of the Environmental Humanities Center at Vrije Universiteit Amsterdam, and associate editor of the journal Environmental Humanities (Duke UP).

Roel van den Oever is assistant professor of English literature at Vrije Universiteit Amsterdam. He is the author of Mama's Boy: Momism and Homophobia in Postwar American Culture (Palgrave Macmillan 2012).