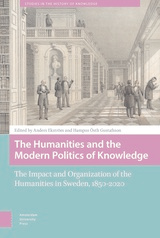 The Humanities and the Modern Politics of Knowledge: The Impact and Organization of the Humanities in Sweden, 1850-2020
by Anders Ekström and Hampus Östh Gustafsson
Amsterdam University Press, 2022
eISBN: 978-90-485-5502-4
This book addresses the shifting status of the humanities through a national case study spanning two centuries. The societal function of the humanities is considered from the flexible perspective of knowledge politics in order to historicize notions of impact and intellectual organization that tend to be taken for granted. The focus on modern Sweden enables an extended but still empirically coherent historical analysis, inviting critical comparisons with the growing literature on the history of the humanities from around the world. In the Swedish case, the humanities were instrumental to the construction of modern societal institutions, political movements, and professional education in the second half of the 19th century, while in the 20th century, the sense of future-making shifted towards science and medicine, and later technology and economy. The very rationale of the humanities was thus put under pressure as their social contract required novel negotiations. Their state and connections to society were nevertheless of a complex and ambiguous character, as is demonstrated by this volume whose contributions explore the many faces and places of the modern humanities.
AUTHOR BIOGRAPHY
Anders Ekström is professor of History of Science and Ideas at Uppsala University. He has published broadly on modern cultural, intellectual and media history and theory. Among recent publications is Times of History, Times of Nature: Temporalization and the Limits of Modern Knowledge (Berghahn Books, 2022; with Staffan Bergwik). His current research is focused on two areas: the history of publicness, and cultural processes of temporalization in the context of climate change.

Hampus Östh Gustafsson is a researcher at the Department of History of Science and Ideas, Uppsala University, currently engaged in a project on collegiality and history of universities. His doctoral thesis concerned the legitimacy of the humanities in twentieth-century Sweden. Recent publications include articles in History of Humanities and History of Education Review.


1. (Anders Ekström and Hampus Östh Gustafsson) Introduction: Politics of Knowledge and the Modern History of the Humanities
Emerging Disciplinary Divides
2. (Isak Hammar) Measuring Up To the Humanities: Navigating the Epistemological Advantage of Classical Humanism in Nineteenth-Century Scholarly Periodicals.
3. (Martin Jansson) Into the Present: On the Modern Historicity of the Philologist Bible
4. (Joakim Landahl and Anna Larsson) Pedagogy and the Humanities: Changing Boundaries in the Academic Map of Knowledge 1860s–1960s
5. (Johannes Siapkas) Contested Classicism: Reconciling Classical Studies in Twentieth-Century Sweden
Places of the Humanities in the Postwar World
6. (Hampus Östh Gustafsson) Gadfly or Guide of Souls? The Challenge of Democracy to the Twentieth-Century Humanities
7. (Johan Östling, Anton Jansson and Ragni Svensson) Public Arenas of the Humanities: The Circulation of Knowledge in the Postwar Period
8. (Sven Widmalm) The Place of the Humanities in a World of Science: Nobel Symposium 14 and the Vanishing Humanist
Impact, Policy, and Humanities Futures
9. (Jenny Andersson and David Larsson Heidenblad) Thinking the Human System: The Application of Humanities and Social Science Reasoning to Societal Problems
10. (Fredrik Bertilsson) Borderline Humanities: Culture, History, Language, and Beliefs in Swedish Defense Research
11. (Anna Tunlid) ‘Humanities 2000’: The Legitimizing Discourses of the Humanities in Public Debate and Research Policy at the Turn of the Century
12. (Anders Ekström) Forging the Integrative Humanities: Policies and Prospects