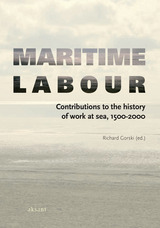 This is a collection of soundings into various aspects of the history of maritime labor from the close of the Middle Ages to the present. The spatial emphasis of the essays is north European and Atlantic since they deal with the countries around the North Sea and Baltic with some coverage of North America. The phrase work at sea naturally makes one think of merchant seafaring and its ancillary trades but, again, several authors in this book deal with navies and naval personnel as important constituents of the seagoing workforce. Indeed, from time to time the authors leave the sea behind in order to examine broader issues such as labor markets, the regulation and institutions of seafaring, and industrial relations on the waterfront. But at all points there is a common theme of sea-related labor, and a common objective of better understanding what have often been perceived as difficult and elusive groups of people. Marcus Rediker was surely correct in a recent essay to stress the challenge of producing more inclusive maritime historical research: We need to get back to basics, to careful empirical reconstructions of the lifeways of peoples long rendered silent in the writing of history.
TABLE OF CONTENTS