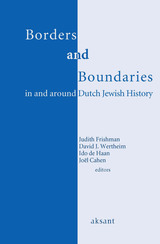 BUY FROM
Borders and Boundaries in and around Dutch Jewish History
by David Wertheim, Judith Frishman, Ido de Haan and Joel Cahen
Amsterdam University Press, 2011
eISBN: 978-90-485-2149-4
Paper: 978-90-5260-387-2
The widespread and long-held preconception that all Jews lived in ghettos and were relentlessly subject to discrimination prior to the Enlightenment has only slowly eroded. Geographically speaking, Jews rarely lived in ghettos and have never been confined within the borders of one nation or country. Power struggles and wars often led to the creation of new national borders that divided communities once united. But if identity formation is subject to change and negotiation, it does not depend solely on shifting geographical borders. A variety of boundaries were and are still being constructed and maintained between ethnic and other collective identities. The contributors to this book, like other post-modernist historians, turn their gaze to a wide range of identities once taken for granted, identities located on the border lines between one country and the next, between Jews and non-Jews as well as on those between one group of Jews and another.
AUTHOR BIOGRAPHY
David J. Wertheim (PhD Universiteit Utrecht 2005) is director of the Menasseh ben Israel Institute for Jewish Social and Cultural Studies in Amsterdam. He authored Salvation through Spinzoza, A Study of Jewish Culture in Weimar Germany (Leiden: Brill 2011)
TABLE OF CONTENTS


Borders and Boundaries in and around Dutch Jewish History - 2Table of Contents - 6Introduction - 8Part I Boundary Work - 20 The Ghetto of Florence and the Spatial Organization of an Early Modern Catholic State - 22 Explaining the Formation of Ghettos under Nazi Rule and its Bearings on Amsterdam Segregating “the Jews” or Containing the Perilous “Ostjuden”? - 36 Markers of a Minority Group Jews in Antwerp in the Twentieth Century - 46Part II Cultural Trespassers - 64 Jewish Parliamentary Representatives in the Netherlands, 1848-1914 Crossing Borders, Encountering Boundaries? - 66 Catinka Heinefetter A Jewish Prima Donna in Nineteenth-Century France - 82 The Political Significance of Anne Frank On Crossing Boundaries and Defining Them - 96Part III Crossing Borders - 110 The Twentieth-Century Portuguese Jews from Salonika“Oriental Jews of Portuguese Origin” - 112 Dutch Jews and German Immigrants Backgrounds of an Uneasy Partnership in Progressive Judaism - 126 Burnishing the Rough The Relocation of the Diamond Industry to Mandate Palestine - 144Part IV Jews in Limbo - 156 Some Reflections on Jewish Identity in Nineteenth-Century Poznania and Jewish Relations with Poles and Germans - 158 Belgian Independence, Orangism, and Jewish Identity The Jewish Communities in Belgium during the Belgian Revolution (1830-39) - 168 Citizenship, Regionalization, and Identity The Case of Alsatian Jewry, 1871-1914 - 184 Moroccan Jewry and Decolonization A Modern History of Collective Social Boundaries - 194Contributors - 202Index of Names and Places - 205