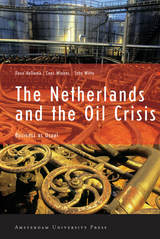 BUY
The Netherlands and the Oil Crisis: Business as Usual
by Duco Hellema, Cees Wiebes and Toby Witte
Amsterdam University Press, 2004
eISBN: 978-90-485-0364-3
Paper: 978-90-5356-485-1
This incisive study examines the role of the Netherlands in the October War and the oil crisis of 1973. The authors contend that the actions of the Dutch government were hypocritical: the Dutch government faced a domestic crisis when an oil embargo was levied against them by Arab countries for selling arms to Israel; yet after oil began arriving again two months later, the Dutch rejected a proposal for a stricter interventionist energy policy within the European Union. A probing and thought-provoking study, The Netherlands and the Oil Crisis draws on previously unavailable archival sources to shed new light on a pivotal moment in contemporary Dutch history.
AUTHOR BIOGRAPHY
Duco Hellema is professor of international relations at the University of Utrecht. Cees Wiebes lectures in political science at the University of Amsterdam. Toby Witte lectures in political science at the Rotterdam Polytechnic.
TABLE OF CONTENTS