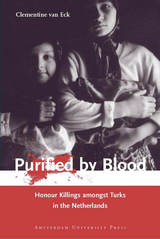 Honor killings—murders carried out to cleanse tarnished family honor or chastity—have long been reported as significant problems in the heart of the Muslim world. It is also a widely known phenomenon in Turkey, where an average of six such killings is reported per month, and with Turkish migration to Western Europe since the 1960s, these murders have been reported in the Netherlands, Belgium, Germany, France, Sweden, and Denmark. Clementine van Eck's incisive study examines twenty such murders committed in the Netherlands, focusing particular attention on the social factors that play a role in the decision to commit an honor killing.
AUTHOR BIOGRAPHY
Clementine van Eck studied cultural anthropology and Turkish language and literature. She now teaches courses on honour killing and intercultural communication to the police.
REVIEWS
NRC Handelsblad over de eerder verschenen Nederlandse versie: ‘Een zeer welkom boek.’
TABLE OF CONTENTS