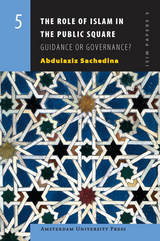 BUY
The Role of Islam in the Public Square: Guidance or Governance?
by Abdulaziz Sachedina
Amsterdam University Press, 2006
eISBN: 978-90-485-0395-7
Paper: 978-90-5356-825-5
The Role of Islam in the Public Square tackles the critical role of religion in the development of democratic institutions in Afghanistan and Iraq. Constitutional debates, Abdulaziz Sachedina asserts, have yet to address the role of religious convictions alongside their citizens’ basic freedoms and rights. Sachedina argues that the way in which religious values are defined in Afghanistan and Iraq remains a major stumbling block, and that an inclusive sense of citizenship—one that transcends doctrinal and theological uniformity—is needed if democracy is to succeed in both countries.
AUTHOR BIOGRAPHY
Abdulaziz Sachedina is professor of religious studies at the University of Virginia.
TABLE OF CONTENTS


"The Role of Islam in the Public Square:  Guidance or Governance?
The International Institute for the Study of Islam in the Modern World (ISIM) Annual Lecture, 8 December, 2003 at the Academy Building, Leiden University