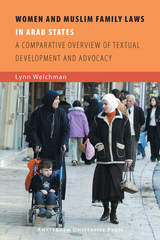 Muslim family law—and its principles regarding marriage, divorce, personal maintenance, paternity, and child custody—is the one of the most widely applied family law systems in existence today.  A number of states have recently codified Muslim family law for the first time or have issued significant amendments or new laws, spurred in many cases by interventions from women’s rights groups and other advocacy organizations.  Women and Muslim Family Laws in Arab States combines an examination of women’s rights under Muslim family law in Arab states across the Middle East with discussions of the public debates surrounding the issues that have been raised during these processes of codification and amendment.

Drawing on original legal texts and explanatory statements as well as extensive state-based secondary literature, Welchman places these discussions in a contemporary global context that internationalizes the domestic and regional particularities of Muslim family law.  Accompanied by a full bibliography and an appendix providing translated extracts of the laws under examination Women and Muslim Family Law considers laws from the Gulf States to North Africa in order to illustrate the legal, social, and political dynamics of the current debates.
AUTHOR BIOGRAPHY
Lynn Welchman is senior lecturer in Islamic and Middle Eastern Laws at the School of Oriental and African Studies, University of London.
REVIEWS
Since the last decades of the 20th century, the forces of political Islam,
globalization and new media have made Muslim family law a new site of
passionate debate and contestation that transcends national and regional
boundaries. This timely and much-needed book traces recent legislative
developments in what the author defines as the third phase of Muslim family
law reform