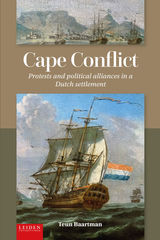 From 1652 until 1795, the Cape of Good Hope was a Dutch settlement marked by tensions, often portrayed as antagonism between the oppressive Dutch East India Company (VOC) and the Cape’s aggrieved burghers. However, by comparing the political structures, institutions and dynamics of the Dutch Republic and its overseas settlement, the Teun Baartman demonstrates that this relationship was more cooperative and that the Cape burghers were able to influence policies in their favor similar to the way burghers in the Dutch Republic did by forming political factions. Using the Cape Conflict of the later eighteenth century as a case study, Baartman illustrates that it was in fact a fight for power between factions within the ruling elite, which consisted of both VOC officials and burghers. This book offers new evidence, a variety of interpretations, and an innovative narrative about where burghers came from, what their position was, and how the Cape political world operated.
AUTHOR BIOGRAPHY
Teun Baartman is a consultant researcher to Outsiders Within, a research archive project of the Evangelical Lutheran Church in Cape Town. He has contributed numerously to publications on burghers in the Cape Colony.
REVIEWS
“A significant contribution to the literature on the history of the early colonial Cape”
— Dr Wayne Dooling, School of Oriental and African Studies, University of London

“A highly original study and very significant in its historiographical import – it will change the way we think about the Dutch Cape.”
— Professor Gerald Groenewald, University of Johannesburg

"Baartman’s well-researched study of South Africa’s Cape Colony (also known as the Cape of Good Hope) during the period of the Dutch East Company's rule (1652–1795) emphasizes the Dutch character of the colony and its ties to the traditions and institutions of the Netherlands. Recommended."
— Choice


Introduction
1. From refreshment to settlement
2. Dutch Africa
3. A big mistake
4. Traditions of protest
5. The burgher troubles spread like wildfire
6. The 404 burghers
7. Motives for protest
a. The 1778 ‘Revolution’
b. The Enlightenment
c. The “deteriorating state of the burghers”
d. Banishment and burgher honour
8. The Cape elite – family and power
9. A challenge from within
10. Protests continued … and betrayed
11. Not Patriots, but matadors