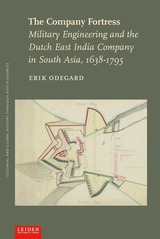 The remains of Dutch East India Company forts are scattered throughout littoral Asia and Africa. But how important were the specific characteristics of European bastion-trace fortifications to Early-Modern European expansion? Was European fortification design as important for Early-Modern expansion as has been argued? This book takes on these questions by studying the system of fortifications built and maintained by the Dutch East India Company (VOC) in present-day India and Sri Lanka. It uncovers the stories of the forts and their designers, arguing that many of these engineers were in fact amateurs and their creations contained serious flaws. Subsequent engineers were hampered by their disagreement over fortification design: there proved not to be a single “European school” of fortification design. The study questions the importance of fortification design for European expansion, shows the relationship between siege and naval warfare, and highlights changing perceptions by the VOC of the capabilities of new polities in India in the late eighteenth century.
AUTHOR BIOGRAPHY
Erik Odegard wrote in Leiden his PhD on Dutch colonial governors in the seventeenth century. He has published on shipbuilding, agency problems, naval warfare and the Dutch chartered companies. Currently, he works at the Mauritshuis museum as head of the research project ‘Revisiting Dutch Brazil and Johan Maurits’.
REVIEWS
“…the best and fullest available guide to the evolution of fortification technology from the first bastions through into the eighteenth-century” - David Parrott, University of Oxford

Introduction
Fortification and urban design
The Military Revolution and its effects on European expansion: fact or fiction?
Method, sources, and structure
1. Artillery fortification at home and abroad
2. “A Company of commerce but also of State”: The VOC in South Asia
3. The Van Goens system: Building the fortifications, 1650-1675
4. Criticism and construction
5. Mughal decline and the Company: From victory at Chowgaht to disaster at Bedera, 1717-1759
6. After Bedara: Attempting to improve defenses, 1759-1780
7. A plague of engineers
8. The Military Committee: The Generality intervenes in the debates, 1787-1792
9. Fall of a fortress
Conclusion: The military evolution of the South Asian states
Appendix 1: Some remarks on terminology and illustrations
Acknowledgements
Bibliography
Archival Sources
Printed primary Sources
Secondary Sources
Index