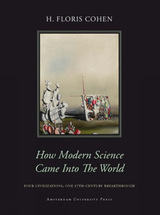 Once upon a time ‘The Scientific Revolution of the 17th century’ was an innovative concept that inspired a stimulating narrative of how modern science came into the world. Half a century later, what we now know as ‘the master narrative’ serves rather as a strait-jacket — so often events and contexts just fail to fit in. No attempt has been made so far to replace the master narrative. H. Floris Cohen now comes up with precisely such a replacement.Key to his path-breaking analysis-cum-narrative is a vision of the Scientific Revolution as made up of six distinct yet narrowly interconnected, revolutionary transformations, each of some twenty-five to thirty years’ duration. This vision enables him to explain how modern science could come about in Europe rather than in Greece, China, or the Islamic world. It also enables him to explain how half-way into the 17th century a vast crisis of legitimacy could arise and, in the end, be overcome.Building forth on his earlier The Scientific Revolution. A Historiographical Inquiry (1994), his new book takes the latest researches duly into account, while connecting these in highly innovative ways. It is meant throughout as a constructive effort to break up all-too-deeply frozen patterns of thinking about the history of science.Blurbs"In this provocative, comparative treatment of a classic moment in the history of science Floris Cohen brilliantly challenges current narratives."--Robert S. Westman, University of California, San DiegoFor the most part, historians spend their energy trying to explain military conquests, the succession of governments, religious or ideological movements, or social and economic change. What they miss (or avoid?), however, is surely more significant than any of these things for an understanding of world history. Historians have completely failed to explain why science, which largely characterizes modern world civilization, emerged in Western Europe in the Renaissance, after having failed to establish itself earlier and in other civilizations (most notably in Ancient Greece, China, Islam, and medieval Christendom). In this very important book, Floris Cohen finally and comprehensively provides an answer to this enduring historical mystery. In so doing, he also provides a definitive account of the so-called Scientific Revolution, and shows why it really was revolutionary."-"This supremely important book will become indispensable reading for anyone interested in how the modern world became the way it is. By comprehensively explaining the rise of science, and its why, where and when, Floris Cohen has solved, dazzlingly, one of the most pressing problems in world history."--John Henry, University of Edinburgh
AUTHOR BIOGRAPHY
H. Floris Cohen is professor of comparative history of science at Utrecht University.
TABLE OF CONTENTS