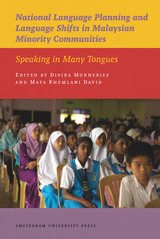 Malaysia has long been a melting pot of various cultures and ethnicities, including the three largest populations, the Malay, Chinese, and Indians. Despite this, efforts to implement multilingualism, advocated by language educators and policy makers, have been marred by political and religious affiliations. Drawing on two decades of field research, this timely analysis of language variation in Malaysia is an important contribution to the understanding not only of linguistic pluralism in the country, but also of the Indian Diaspora, and of the effects of language change on urban migrant populations. The research presented here will be of interest to scholars of Southeast Asian and South Asian Studies.

1. The Importance of Ethnic Identity when Language Shift Occurs: A Study of the Malaysians Iyers
Lokasundari Vijaya Sankar
2. Ethnic Identity in the Tamil Community of Kuching
Maya Khemlani David, Caesar Dealwis and Ponmalar N Alagappar
3. Do Exogamous Marriages Result in Language Shift? Focus on the Sindhis of Kuching, Malaysia
Maya Khemlani David and Caesar Dealwis
4. Malaysian-Filipino Couples and Language Choice: Heritage Language or International Language?
Francisco Perlas Dumanig and Maya Khemlani David
5. I am not English but my First Language is English: English as a First Language among Portuguese Eurasians in Malaysia
Stefanie Pillai and Mahmud Hasan Khan
6. Language and Identity: Children of Indian Bidayuh Mixed Marriages
Caesar Dealwis and Maya Khemlani David
7. The Impact of Language Policy on Language Shifts in Minority Communities: Focus on the Malayalee Community in Malaysia
Mohana Nambiar
8. My Son has to maintain his Language because that is his Culture: The Persistence and Adaptation of the Bengali Community in Malaysia
Dipika Mukherjee
9. Intercultural Communication in Sarawak: Language Use of the Chinese-Speaking Communities
Su-Hie Ting
10. Malay Javanese Migrants in Malaysia: Contesting or Creating Identity?
Jariah Mohd Jan
11. Conclusions: Multilinguality in the Malaysian Context of Nation-Building and Globalisation
Renate Kärchner-Ober, Dipika Mukherjee and Maya Khemlani David