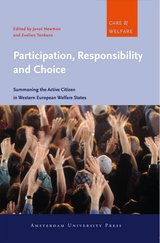 Faced with budget problems and an aging population, European governments in recent years have begun reconsidering the structure and extent of the welfare state. Guarantees and directives have given way to responsibilities and choice. This volume analyzes the effect of this change on the citizens of Germany, Finland, Norway, the Netherlands, France, Italy and the United Kingdom. It traces the emergence of new discourses around social movements for greater independence, power, and control, and the way these discourses serve to reframe the struggle at hand. Making use of ethnographic research and policy analysis, the authors analyze the cultural transition, tensions, and trajectory of this call toward active citizenship.

About the editors and contributors
Index