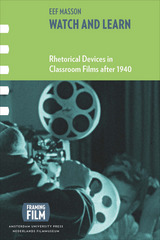 Instructional films of the twentieth century, used to teach, train, inform, or advertise to their viewers, can provide historians and scholars of cinema studies with a wealth of information about both their creators and intended consumers. Watch and Learn focuses on the rhetoric used in these films, particularly the way in which the films used in the classroom relate to their audience, casting them both as film viewers and students. Providing the outline for a new methodology for interpreting and understanding the scripts and visuals of this peculiar brand of cinema, this book approaches the study of instructional films from a novel and illuminating perspective.
AUTHOR BIOGRAPHY
Eef Masson is assistant professor in the Department of Media Studies at the University of Amsterdam.
TABLE OF CONTENTS

Conclusions: Towards a Conception of the Dispositif Notion as a Comparative Tool
Notes
List of Illustrations
NOF Films Online
Filmography
Bibliography
Index