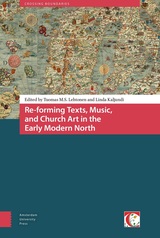 Our historical understanding of the Reformation in northern Europe has tended to privilege the idea of disruption and innovation over continuity - yet even the most powerful reformation movements drew on and exchanged ideas with earlier cultural and religious practices. This volume attempts to right the balance, bringing together a roster of experts to trace the continuities between the medieval and early modern period in the Nordic realm, while enabling us to see the Reformation and its changes in a new light.
AUTHOR BIOGRAPHY
Tuomas M.S. Lehtonen is Secretary General of the Finnish Literature Society and Adjunct Professor at the University of Helsinki. He has published widely on medieval history and literature, as well as on the relationship between oral and literary culture in the Middle Ages and the Early Modern period.Linda Kaljundi is a researcher with the Finnish Literature Society. She has published mainly on the Nordic crusades, medieval historiography and images of otherness, and also on the Estonian cultural memory.
TABLE OF CONTENTS


AcknowledgementsA note on namesList of maps, figures, tables, and musical examplesIntroduction Tuomas M.S. Lehtonen and Linda KaljundiPart I: Contextualizations and thematizations1. Popular belief and the disruption of religious practices in Reformation Sweden Martin Berntson2. Trade and the known world: Finnish priests' and laymen's networks in the late medieval Baltic Sea region Ilkka Leskelä3. Diglossia, authority, and tradition: the influence of writing on learned and vernacular languages Marco MostertPart II: Music and religious performances4. Changes in the poetics of song during the Finnish Reformation Kati Kallio5. Vernacular Gregorian chant and Lutheran hymn-singing in Reformation-era Finland Jorma Hannikainen and Erkki Tuppurainen6. Pious hymns and devil's music: Michael Agricola (c. 1507-57) and Jacobus Finno (c. 1540-88) on Church song and folk beliefs Tuomas M.S. Lehtonen7. The emergence of hymns at the crossroads of folk and Christian culture: an episode in early modern Latvian cultural historyMara GrudulePart III: Church art and architecture8. Reform and pragmatism: on Church art and architecture during the Swedish Reformation era Anna Nilsén9. Early Lutheran networks and the changes in the furnishings of the Finnish Lutheran parish church Hanna Pirinen10. Continuity and change: reorganizing sacred space in Post-Reformation Tallinn Merike KurisooPart IV: The 'other' and the afterlife11. Pagans into peasants: ethnic and social boundaries in early modern Livonia Linda Kaljundi12. Est vera India septemtrio: re-imagining the Baltic in the Age of Discovery Stefan Donecker13. Transformations of Saint Catherine of Alexandria in Finnish vernacular poetry and rituals Irma-Riitta Järvinen14. Agricola's List (1551) and the formation of the Estonian pantheon Aivar PõldveeAbout the authorsIndex