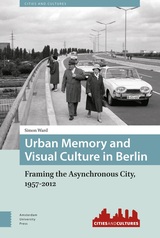 As sites of continual change and transformation, cities are fundamentally forgetful places. Yet at the same time, urban areas are also homes to museums and archives that collect and exhibit the past-a key cultural, political, and economic activity. This book looks at that paradox through the example of Berlin to see how the city has responded to challenges to memory created by rapid changes in politics, economics, society, and the built environment, ultimately arguing that the recovery of the experience of time is central to the practices of an emergent memory culture in the contemporary city.
AUTHOR BIOGRAPHY
Dr Simon Ward is Lecturer in the School of Modern Languages at Durham University, where he teaches German literature and visual culture.
TABLE OF CONTENTS


AcknowledgementsIntroduction: Berlin and the question of 'urban memory'Chapter One: Remembering the 'Murdered City': Berlin, West and East, 1957-1974Chapter Two: Place Memory Work in East and West Berlin 1975-1983Chapter Three: The Remembered City on Display 1983-1994Chapter Four: In Search of a City: Urban Memory in Unified Berlin 1994-2009Conclusion: The Collectives of Contemporary Urban Memory, 2012