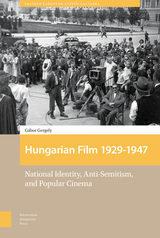 What does it mean for someone or something to be Hungarian? People in Hungary grappled with this far-reaching question in the wake of the losses and transformation brought by World War I. Because the period also saw the rise of cinema, audiences, filmmakers, critics, and officials often looked at films with an eye to that question, too. Did the Hungary seen on screen represent the Hungary they knew from everyday life? And-crucially-did the major role played by Jewish Hungarians in the film industry make the sector and its creations somehow Jewish rather than Hungarian? Jews, it was soon decided, could not really be Hungarian, and acts of Parliament soon barred them from taking major roles in cinema production. This book tells the troubled story of that period in Hungarian cinematic history, taking it up through World War II.
AUTHOR BIOGRAPHY
Gábor Gergely is a lecturer in film studies at the University of Lincoln. He has published articles on Hungarian cinema in the 1930s and 1940s, and a book, Foreign Devils (2012), on perceptions of difference in the films of émigré stars in classical Hollywood. More recently, he has published on the MGM Tarzan films of Johnny Weissmuller. He is currently working on the accent, both as a linguistic and as a critical term, in relation to the films and stardom of Arnold Schwarzenegger.
TABLE OF CONTENTS