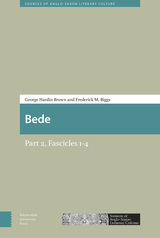 This newest volume in a long-running work of mapping the sources of Anglo-Saxon literary culture in England from 500 to 1100 CE takes up one of the most important authors of the period, the eighth-century monk-scholar known as the Venerable Bede. Bede is best known as the author of the Historia ecclesiastica gentis Anglorum, which is one of the key sources for our historical and cultural knowledge of the period; this collection covers that and more, drawing on manuscript evidence, medieval library catalogues, Anglo-Latin and Old English versions, citations, quotations, and more, putting Bede and his work in the context of his period.
AUTHOR BIOGRAPHY
George Hardin Brown is professor of English and Classics at Stanford University.Frederick Biggs is professor of English at the University of Connecticut.Charles D. Wright is Professor, Department of English, University of Illinois at Urbana-Champaign
TABLE OF CONTENTS


Each entry, in this case, the individual works by Bede, have an introduction, and encylopaedic references to:1) the critical edition(s) in which the work is found (e.g. CPL or CCSL)2) extant manuscripts3) occurrences in lists by near-contemporaries, such as Alcuin, to show early circulation4) citations or references within Anglo-Saxon verse5) quotations or citations in later authors (such as Alcuin, Boniface).This is typically followed by a summary of the content of the work, and how later Anglo-Saxon authors used the material. Cross-references are provided to other articles in the encyclopaedia dealing with these other works and authors.