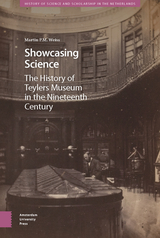 BUY
Showcasing Science: A History of Teylers Museum in the Nineteenth Century
by Martin P.M. Weiss and Martin P.M. Weiss
Amsterdam University Press, 2019
Cloth: 978-94-6298-224-6
eISBN: 978-90-485-3214-8
Teylers Museum was founded in 1784 and soon thereafter became one of the most important centres of Dutch science. The Museum’s first director, Martinus van Marum, famously had the world’s largest electrostatic generator built and set up in Haarlem. This subsequently became the most prominent item in the Museum’s world-class, publicly accessible, and constantly growing collections. These comprised scientific instruments, mineralogical and palaeontological specimens, prints, drawings, paintings, and coins. Van Marum’s successors continued to uphold the institution’s prestige and use the collections for research purposes, while it was increasingly perceived as an art museum by the public. In the early twentieth century, the Nobel Prize laureate Hendrik Antoon Lorentz was appointed head of the scientific instrument collection and conducted experiments on the Museum’s premises. Showcasing Science: A History of Teylers Museum in the Nineteenth Century charts the history of Teylers Museum from its inception until Lorentz’ tenure. From the vantage point of the Museum’s scientific instrument collection, this book gives an analysis of the changing public role of Teylers Museum over the course of the nineteenth century.
AUTHOR BIOGRAPHY
Martin P.M. Weiss is a historian of science at the German Maritime Museum. He studied in Aachen and Utrecht and received his PhD from Leiden University.
TABLE OF CONTENTS