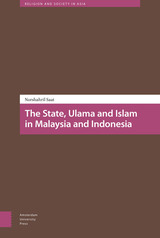 The Suharto (1966-98) government of Indonesia and the Mahathir (1981-2003) government of Malaysia both launched Islamisation programmes, upgrading and creating religious institutions. The author argues that, while generally ulamas, or religious teachers, had to support state ideologies, they sometimes succeeded in ŸcapturingŒ the state by influencing policies in their favour. The author builds his argument on strong fieldwork data, especially interviews, and he engages in critical discussion of comparative politics paradigms and the concept of capture.
AUTHOR BIOGRAPHY
Dr Norshahril Saat is Fellow at the ISEAS-Yusof Ishak Institute. He received his PhD in International, Political and Strategic Studies from the Australian National University (ANU). He has published extensively on Islamic authority in Southeast Asia.
TABLE OF CONTENTS


About the AuthorPrefaceTable of contentsAbbreviations and acronymsA note on translation, spelling, and other conventions1. Introduction2. Official ulama in Indonesia and Malaysia: Emergence, perception and authority3. The rise in piety and the roots of state co-optation4. MUI in the post-New Order: A capture in progress5. Malaysian muftis and official ulama: The state captured?6. Conclusion: The future of official ulama and state capture