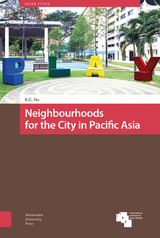 BUY
Neighbourhoods for the City in Pacific Asia
by Kong Chong Ho
Amsterdam University Press, 2020
Cloth: 978-94-6298-388-5
eISBN: 978-90-485-3434-0
The largest cities in Pacific Asia are the engines of their countries’ economic growth, seats of national and regional political power, and repositories of the nation’s culture and heritage. The economic changes impacting large cities interact with political forces along with social cultural concerns, and in the process also impact the neighbourhoods of the city. Neighbourhoods for the City in Pacific Asia looks at local collective action and city government responses and its impact on the neighbourhood and the city. A multi-sited comparative approach is taken in studying local action in five important cities (Bangkok, Hong Kong, Seoul, Singapore and Taipei) in Pacific Asia. With site selection in these five cities guided by local experts, neighbourhood issues associated with the fieldsites are explored through interviews with a variety of stakeholders involved in neighourhood building and change. The book enables comparisons across a number of key issues confronting the city: heritage (Bangkok and Taipei), local community involved provisioning of amenities (Seoul and Singapore), placemaking versus place marketing (Bangkok and Hong Kong). Cities are becoming increasingly important as centers for politics, citizen engagement and governance. The collaborative efforts city governments establish with local communities become an important way to address the liveability of cities.
AUTHOR BIOGRAPHY
K.C. Ho is a sociologist at the National University of Singapore. Trained at the University of Chicago, his research interests include urban studies, migration, and higher education.
TABLE OF CONTENTS