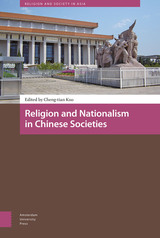 This book explores the interaction between religion and nationalism in the Chinese societies of mainland China, Taiwan, and Hong Kong. Cheng-tian Kuo analyses the dominant religions, including Chinese Buddhism, Tibetan Buddhism, Daoism, Christianity, Islam, and folk religions, but he also goes beyond that, showing how in recent decades the Chinese state has tightened its control over religion to an unprecedented degree. Indeed, it could almost be said to have constructed a wholly new religion, Chinese Patriotism. The same period, however, has seen the growth of democratic civil religions, which could challenge the state.
AUTHOR BIOGRAPHY
Cheng-tian Kuo is Distinguished Professor of Political Science Department and Graduate Institute of Religious Studies at the National Chengchi University in Taiwan. He is the author of Religion and Democracy in Taiwan (State University of New York Press, 2008).
TABLE OF CONTENTS