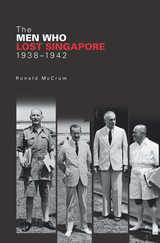 The British military failure against the Japanese invasion of Singapore in 1942 is a well-documented and closely examined episode. But far less attention has been paid to the role of the colonial governor and his staff during this period, an oversight Ronald McCrum corrects with this insightful history. As McCrum shows, the failure of the civil authorities in conjunction with the military to fully prepare the country for the possibility of war was a key factor in the defeat.

In The Men Who Lost Singapore, McCrum closely examines the role and responsibilities of the colonial authorities before and during the war. He argues that the poor and occasionally hostile relations that developed between the local government and the British military hierarchy prevented the development and implementation of a strategic and unified plan of defense against the growing threat of the Japanese. Consequently, this indecisive and ineffective leadership led to significant losses and civilian casualties that could have been prevented.
AUTHOR BIOGRAPHY
Ronald McCrum is a retired British army colonel who served in Malaya and Singapore. He served over two years as the Defence Attaché in the High Commission in Singapore and as Defence Attaché in Israel at the beginning of the Palestinian intifada.
REVIEWS
“A must-read for anyone wishing to understand why Singapore’s fall occurred in the manner it did.”
— Greg Kennedy, King's College, London

“McCrum’s emphasis on the civilian leadership represents an unexpectedly original approach to a story that has been told many times before, and for that alone he deserves high marks...Certainly, anyone in future doing scholarly work on the actions of the colonial authorities in Singapore during the Japanese invasion will need to take into account McCrum’s findings.”
— Brian Bertosa, Canadian Military History

“While the fall of Singapore in February 1942 has enjoyed much scholarly attention, Colonel Ronald McCrum zeroes in on an oft-neglected aspect: the role of the civilian administration in the disaster. . . . For its focus on civil governance and civil defense, elements often overshadowed by grand strategy, this book is critical reading for any student of the fall of the ‘Impregnable Fortress.’”
— H-Net