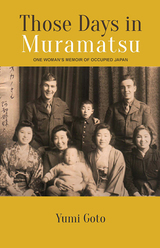 In the aftermath of the Pacific War and Japan’s capitulation, Mrs Yumi Goto and her family lived in the small community of Muramatsu, where they had relocated to get away from Tokyo. Yumi Goto was an English-speaking graduate of one of Japan’s top universities for women, and when a contingent of American soldiers was sent to Muramatsu as a garrison force, she became an interpreter. The sudden influx of more than 1,800 Americans into a rural Japanese community was potentially traumatic, and their imminent arrival made the townspeople “depressed and fearful”. To everyone's surprise, they found the soldiers to be “open-hearted and humane”, and the two sides co-existed peacefully. Those Days in Muramatsu is a testimony to the capacity of ordinary people from vastly different backgrounds to co-exist harmoniously, even in the aftermath of war.
TABLE OF CONTENTS

The Mountain Temple
The Anxious Inhabitants
The First Americans in the Town
Shopping
The Opening of RTO
The Arrival of the Troops
Celebration
Getting to Know Each Other
The First Ride in the Jeep
Lt. Ferocious “Budoshu” Grotious
A Shady Deal
A Trip to Shibata
Housing Problem and Mr. Kuno
My Days at the Station
To Change Is the Army Way
The Party at the Mayor’s
Ohara-san and Makino-san
Dismayed
The New RTO Boys
A Little Tact To Stop Gossip
Souvenir Shops
A Red Cross Night
Worried Parents
An Accident
The Rains Came
Teaching Japanese
A Picnic
Capone’s Nephew
Blackmarketing
Salmon Fishing
The First Snowfall
“Sayonara!”
Later Days
“What Time, Ueno?”