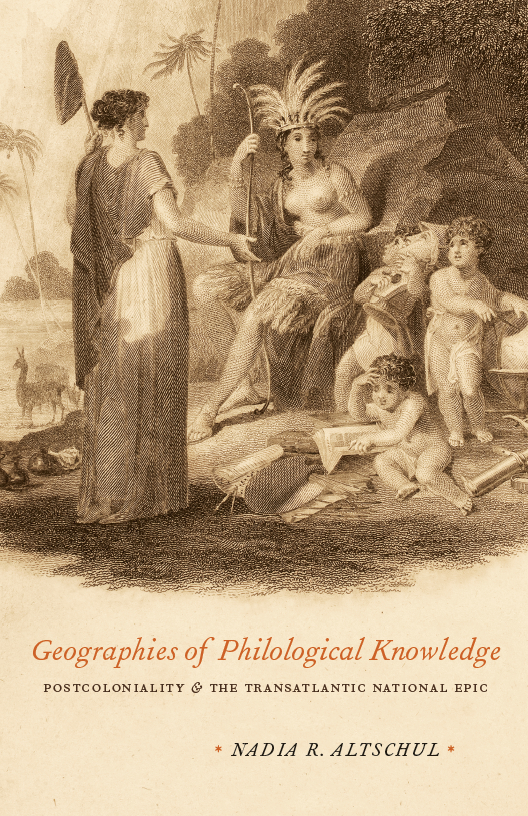 Geographies of Philological Knowledge examines the relationship between medievalism and colonialism in the nineteenth-century Hispanic American context through the striking case of the Creole Andrés Bello (1781–1865), a Venezuelan grammarian, editor, legal scholar, and politician, and his lifelong philological work on the medieval heroic narrative that would later become Spain’s national epic, the Poem of the Cid. Nadia R. Altschul combs Bello’s study of the poem and finds throughout it evidence of a “coloniality of knowledge.”
Altschul  reveals how, during the nineteenth century, the framework for philological scholarship established in and for core European nations—France, England, and especially Germany—was exported to Spain and Hispanic America as the proper way of doing medieval studies. She argues that the global designs of European philological scholarship are conspicuous in the domain of disciplinary historiography, especially when examining the local history of a Creole Hispanic American like Bello, who is neither fully European nor fully alien to European culture. Altschul likewise highlights Hispanic America’s intellectual internalization of coloniality and its understanding of itself as an extension of Europe.
A timely example of interdisciplinary history, interconnected history, and transnational study, Geographies of Philological Knowledge breaks with previous nationalist and colonialist histories and thus forges a new path for the future of medieval studies.

Nadia R. Altschul teaches in the Department of German and Romance Languages and Literatures at Johns Hopkins University. She is coeditor of Medievalisms in the Postcolonial World: The Idea of “the Middle Ages” Outside Europe.

“In this important study, Nadia R. Altschul takes as her point of departure the posthumous 1881 edition by Andrés Bello of the Castilian ‘national epic,’ Poema de mio Cid (largely completed by 1834). In her meditation on the ‘Creole medievalism’ of Bello, Altschul reveals many blind spots in our understandings of postcoloniality and of the historiography of medievalism itself, which, from this study on, cannot be fully understood without reference to the complex role played by Latin American (and, more broadly, American) medievalism—claiming American culture’s medieval European origins even as it introduces a ‘corrupting’ influence into the European medieval-nationalist-philological project—in shaping ideas of nation, of philology, and of the construction of ‘the West.’ One of the signal achievements of this book is that in it, Altschul show us how scholarship that grows out of personal passion and engagement can open up, not blind us to, the complexities of the subjects that move us.”
— John Dagenais, University of California, Los Angeles

“Nadia R. Altschul has been responsible for some of the most searching studies of the links between the European premodern past and the colonial enterprise. In her new book, she turns her attention to the Americas and to the central role of Andrés Bello in the formation of Latin American cultural identities. The result is a fundamental rethinking of an apparently authoritative humanism, revealing its Creole status. Beneath Altschul’s lucid and precise prose is a passionate intelligence. It will be welcomed not only by students of Spanish-language literatures but also by those in postcolonial studies and transnational American studies.”
— John M. Ganim, author of Medievalism and Orientalism

“Fascinating, informative, and sophisticated, . . . the book encompasses a well-focused case study of the intellectual history, reception, and scholarly destiny of Andrés Bello's early-nineteenth-century edition of the Poem of the Cid (completed in 1834 but not published until 1881). In this way, Altschul’s book constitutes a commendable and profound exploration of Bello’s work and his position in the context of the development of Hispanic philology, nineteenth- and twentieth-century transatlantic cultural relations, and the unspoken ideologies and dogmas that may animate the claims of all academic disciplines.”
— E. Michael Gerli, University of Virginia, Speculum

Introduction: Creole Medievalism and Settler Postcolonial Studies - Nadia R. Altschul
DOI: 10.7208/chicago/9780226016191.003.0001
This book, which is concerned with a critique of the national philologies and the national epic through the medievalist work of Andrés Bello, explains the parameters and relationships between the two in the nineteenth century. There is a generalized belief in an implicit alliance between studying the Middle Ages and the creation of cultural links with Europe. A self-critical, historiographical branch of medieval studies has been devoted to elucidating this connection, especially since the foundation of the journal Studies in Medievalism (SIM) in 1976. Scholars have not limited themselves to studying their “own nations” or the origins of their “own language,” and in the case of the more marginalized Iberian medievalism, it is not surprising to find that this scholarly periphery offers a good field in which to discern breaking points in self-referentiality. The disavowal of postcolonialism in Latin American studies brings another terminological discussion to the surface—the meaning and applicability of the term Latin America. (pages 1 - 28)
This chapter is available at:
https://academic.oup.com/chica...

The Global Standards of Intellectual and Disciplinary Historiography - Nadia R. Altschul
DOI: 10.7208/chicago/9780226016191.003.0002
[historiography, Western civilization, philological scholarship, medieval studies, medieval manuscripts]
This chapter outlines that, although disciplinary history posits the beginning of a historically minded interest in the Middle Ages at the so-called Early Modern period, the beginning of a “modern” form of medieval studies is more particularly associated with German developments and allied with its rigorous philological methodology. Historical consciousness is a measuring stick for the achievement of a highly valued modern frame of mind, and a rare and exceptional characteristic of Western civilization. The chapter begins with a critique of the nationalist premises of a European-centered medieval studies through attention to Hispanic American examples such as Andrés Bello and María Rosa Lida. It illustrates in particular how the methodological parameters of nineteenth-century German philology became a global design, exported to the colonies as the proper way of doing medieval studies, and how the notion of philological Romanticism, tied to nationalism, also functions as a global design delimiting the modernity or backwardness of different disciplinary approaches. In the case of early Hispanic American endeavors, the paradox of searching for a nationalist-inflected medieval studies highlights the difficulties of placing non-European medievalist engagements within global European parameters. In terms of Romantic nationalism and German editorial methodology, the accessibility of original medieval manuscripts also acts as a global design determining the backwardness or modernity of Castilian language scholarship. It is necessary to consider hegemonic parameters to understand more fully the discursive strategies that allowed foundational and imperial narratives to thrive in the realm of philological scholarship as a marker of intellectual modernity. (pages 31 - 56)
This chapter is available at:
https://academic.oup.com/chica...

Taken for Indians: “Native” Philology and Creole Culture Wars - Nadia R. Altschul
DOI: 10.7208/chicago/9780226016191.003.0003
[philological modernity, medieval philology, neocolonization, neocolonization, Occidentalism]
This chapter reviews the foundation of the first “philological institute” in a Spanish American former colony, the Chilean Pedagogical Institute (Instituto Pedagógico), created by governmental decree very close in time to the spread of German philological standards across Europe and North America. It examines in particular the contemporary critique of Chile's educational and philological “colonization” by German-trained pedagogues in the writings of Valentín Letelier and Eduardo de la Barra, and highlights how, to criollos such as de la Barra, this neocolonial situation evidenced distressing associations between Chileans and Amerindians. In Spanish America, there is a long history of criollo appropriations of Amerindian identity, as well as of European colonialist equivalences between Amerindians, creoles, and even European-born settlers. The globalized discourse of medieval philology opened mimetic opportunities for peripheral locations to speak the languages needed to become participating members of privileged scholarly circles. The lack of discussion of neocolonization is, in fact, one of the main problems that Latin Americanists working in nineteenth century studies find in postcolonial criticism. (pages 57 - 82)
This chapter is available at:
https://academic.oup.com/chica...

National Epic Denied: European Assertions of the Lack of a Spanish Epic - Nadia R. Altschul
DOI: 10.7208/chicago/9780226016191.003.0004
[Middle Ages, cultural nationalism, European metropolis, artistic poets, French epic]
This chapter examines in particular Spain's marginal location within European scholarship by discussing the positions of Ferdinand Wolf and Gaston Paris, the two major nineteenth-century scholars who denied Spain's spiritual ability to produce an epic poem comparable to the French and German national exemplars. The Middle Ages was able to provide a site for cultural nationalism and a distinctive individual identity to a European metropolis. This culturalist turn to “one's own” national identity vis-à-vis a pan-European identity was associated at the time with an intra-European counter imperialist framework. Primary epics were understood as narrative verse songs that arose directly from the collective Volk; secondary epics—such as the Aeneid or the lettered poems of the early modern period and beyond—were considered as providing the worldviews of individual artistic poets. The French epic had not only been transported to most of Europe but had been differently adopted by Germanic and Romanic people. In the fifteenth century there was a resurgence of interest in the romances, which started to be recollected and assembled, and served as inspiration for new compositions. (pages 85 - 112)
This chapter is available at:
https://academic.oup.com/chica...

Andrés Bello and the Foundations of Spanish National Philology - Nadia R. Altschul
DOI: 10.7208/chicago/9780226016191.003.0005
[national philologies, criollo, philology, Spain, philological nationalism]
This chapter examines how the existence of a criollo medievalist during the early years of epic nationalism creates a fissure instead of a continuity in metropolitan foundational narratives. As Castilian seems to be the only example in which a creole subject could be conceived as placed at the foundation of a “modern” national philology, the Spanish American case further etches the identity of the national philologies as dependent on the existence of metropolitan origins. This chapter reveals how the colonialized placement of Spain within the European realm interacted with the peculiar situation of Andrés Bello as an early editor of the national epic. Spain seems to present an unexpected exception to the narratives of foundation of the national philologies because of the existence of a criollo at the very beginnings of nineteenth-century philological nationalism. Bello's enterprise and characteristics occupy a more difficult position; his native language was Spain's national Castilian dialect, he was a white male of European descent, he was born a citizen of the Spanish body-politic, and he had a level of education that made him difficult to dismiss as a mere amateur. Yet Bello's work with philology and his opinions regarding premodern literatures also had their own particular meaning in and for Spanish America. (pages 113 - 132)
This chapter is available at:
https://academic.oup.com/chica...

Defining the Spanish American National Epic and Other Occidentalist Resistances - Nadia R. Altschul
DOI: 10.7208/chicago/9780226016191.003.0006
[Occidentalism, criollo, epic foundations, epic nationalism, Western geographies, Iberian empire]
After the critical turn to Occidentalism, it became more problematic to examine cultural resistance of criollo subjects vis-à-vis the European metropolis, although the Spanish American wars of independence were a form of political resistance by the settler creoles. This chapter argues that Bello's understanding of the Spanish medieval epic is associated with criollo anxieties and needs regarding the foundation of a viable American identity according to nineteenth-century epic parameters. It discusses specific instances of Occidentalist resistances observed in a group of Bello's scholarly and literary engagements that can be connected through epic nationalism, such as the Poem of the Cid, La Araucana, and his “American Silvas.” The chapter likewise argues that all of Bello's myriad nineteenth-century works should be studied according to the same nineteenth-century temporality instead of classified and interpreted according to the temporality of the text's origin (medieval Cid, colonial Araucana, contemporary “Silvas”). (pages 135 - 178)
This chapter is available at:
https://academic.oup.com/chica...

The Spanish Orient in Bello's Spanish American Occidentalism - Nadia R. Altschul
DOI: 10.7208/chicago/9780226016191.003.0007
[Christianity, Teutonic mythology, Occidentalism, American histories, Medievalism]
This chapter introduces into an understanding of Bello's scholarship the association of Spain with the Islamic Orient that was prevalent in the nineteenth century. In particular, it charts the rejection of this “internal Orient” that Bello needed to accomplish in order to construct inner continuities between Spanish America and Europe by focusing on the Venezuelan's study of Castilian assonance, considered as a peculiarity inherited from Iberian–Arabic interminglings during the Middle Ages. The book closes with a “Coda” offering a reexamination of the discussion on criollo medievalism and settler postcolonial studies. (pages 179 - 201)
This chapter is available at:
https://academic.oup.com/chica...