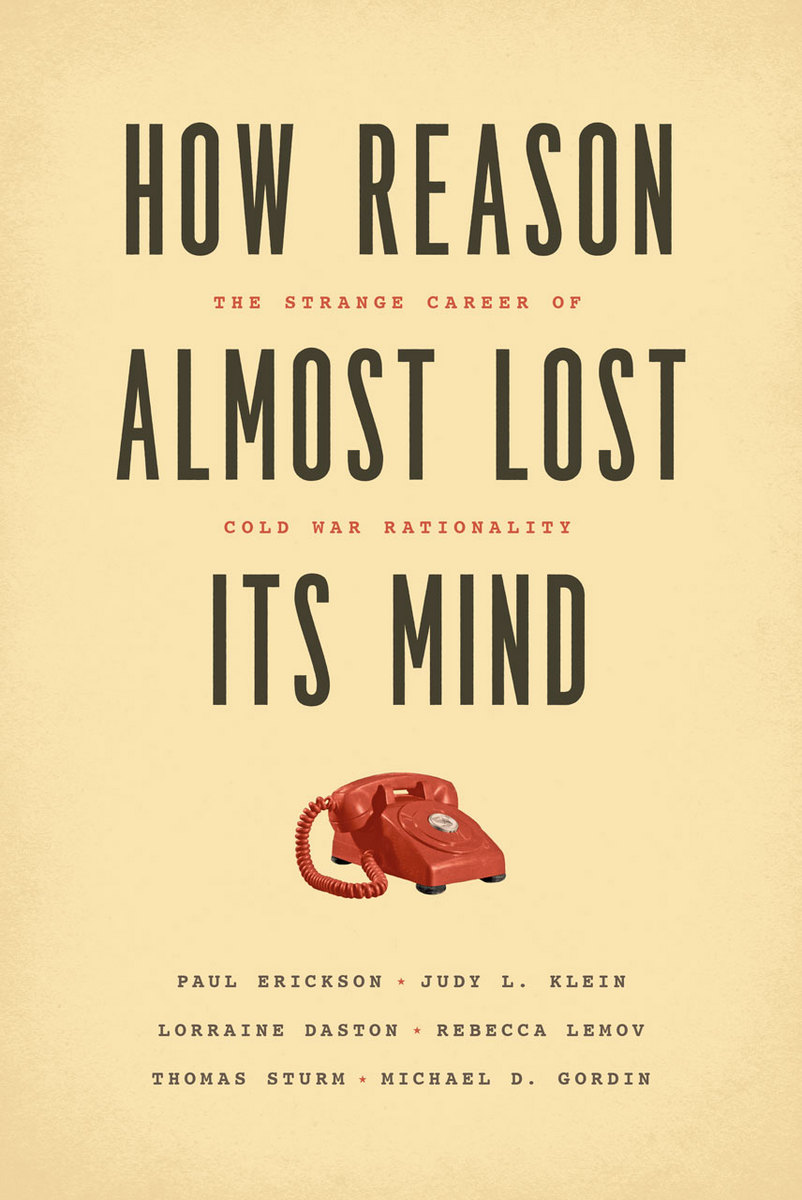 In the United States at the height of the Cold War, roughly between the end of World War II and the early 1980s, a new project of redefining rationality commanded the attention of sharp minds, powerful politicians, wealthy foundations, and top military brass. Its home was the human sciences—psychology, sociology, political science, and economics, among others—and its participants enlisted in an intellectual campaign to figure out what rationality should mean and how it could be deployed.
How Reason Almost Lost Its Mind brings to life the people—Herbert Simon, Oskar Morgenstern, Herman Kahn, Anatol Rapoport, Thomas Schelling, and many others—and places, including the RAND Corporation, the Center for Advanced Study in the Behavioral Sciences, the Cowles Commission for Research and Economics, and the Council on Foreign Relations, that played a key role in putting forth a “Cold War rationality.” Decision makers harnessed this picture of rationality—optimizing, formal, algorithmic, and mechanical—in their quest to understand phenomena as diverse as economic transactions, biological evolution, political elections, international relations, and military strategy. The authors chronicle and illuminate what it meant to be rational in the age of nuclear brinkmanship.

“This is an important book, one that should be read not just by historians of science but by anyone interested in the unique intellectual culture of Cold War America. In this context, reason was redefined, reduced, and simplified into a rule-governed thing—a seemingly universal technology for making choices in an uncertain world. This is a brilliant insight, and the authors carry its illumination into a range of fields, from game theory and operations research to studies of heuristics and biases in individuals and decision making in groups, from the lab and the ‘situation room’ to the wilds of Washington policy making.”
— Hunter Heyck, University of Oklahoma

“In the wake of World War II, a generation of self-proclaimed ‘action intellectuals’ fought to save the world from nuclear Armageddon. They nearly destroyed it. This extraordinary book explains how and why a generation of American social scientists reconceived human reason as algorithmic rationality—and how, when they did, they delivered us into a world that remains anything but rational. If you’ve ever wondered where Dr. Strangelove was born, you need look no further.”

“Traversing territory from Micronesia to Berlin, from Kant to Kantorovich to Schelling, from psychology to economics, How Reason Almost Lost Its Mind offers novel insights about a whole way of thinking. Moving beyond discipline-by-discipline studies, this all-star team of scholars sets the standard for new histories of American intellectual life and the vexed question of ‘Cold War thought.’”
— David C. Engerman, Brandeis University

“The inhuman assumptions of the postwar human sciences form the problematic for this fascinating book. If not quite a fons et origo, the Cold War arms race appears here as the uniquely disturbing frame for a wide-ranging campaign to extirpate irrationality by implementing strict rules of human reasoning.”

“Broadly revelatory. . . . The authors show how dangerous our behavioral scientists (and by implication their human and social science kin) might have been, co-opted as they were into the military and political decision-making in crisis situations just as physicists were co-opted into the construction of the bomb.”
— Mary S. Morgan, London School of Economics, Science

"The authors do an excellent job of probing debates about the meaning, possibilities, and limits of rationality between the 1940s and the 1970s. . . . This masterly book makes a crucial contribution to understanding of Cold War thought, opens many new avenues for further research, and raises important questions about the durability of Cold War thinking in contemporary American social science."
— Journal of American History

"The authors of How Reason Almost Lost Its Mind have made a particularly insightful contribution by showing how 'rationality' has a time and a place; by laying bare its historical contingency, they have taken 'rationality' off its methodological pedestal. . . . In this sense, this kind of scholarship empowers us as humans when we are confronted with the institutional authority of the social sciences."
— Jeroen van Dongen, Metascience

"Through six roughly chronological chapters, the authors demonstrate that this austere, antihumanistic concept of rationality underpinned the work of a far-flung and heterogeneous group of scholars pursing a truly dizzying variety of research programs. . . . How Reason Almost Lost Its Mind advances a provocative argument about a period of American social science that is now attracting increasing and well-justified attention. Historians of post war social science will certainly read this book with profit, as will scholars of the history of thought and, indeed, more generally of scientific practice in the United States."
— Michael Rossi, University of Chicago, Endeavour

“The Situation” in the Cold War Behavioral Sciences - Paul Erickson, Judy L. Klein, Lorraine Daston, Paul Rebecca, Thomas Sturm, Michael D. Gordin
DOI: 10.7208/chicago/9780226046778.003.0005
[Robert Freed Bales, RAND Corporation, the situation, Talcott Parsons, Department and Laboratory of Social Relations, Nuclear Pacific]
Cold War social scientists frequently adopted special experimental situations where they could scientifically model and code many aspects of human behavior, aiming to unravel the mysteries and smooth out the irrationalities of social systems, cultures and the human personality. One particularly vibrant example of the situation at work was in the small group research Robert Freed Bales conducted at the “Special Room” in Harvard University's Department of Social Relations between 1949 and the 1970s. The distance between experimental design and possible political-material interventions was radically shortened in such situations, for they offered dual sets of methodological advantages: real-world immediacy on the one hand and laboratory-like artificial control of conditions on the other. (pages 107 - 132)
This chapter is available at:
University Press Scholarship Online

World in a Matrix - Paul Erickson, Judy L. Klein, Lorraine Daston, Paul Rebecca, Thomas Sturm, Michael D. Gordin
DOI: 10.7208/chicago/9780226046778.003.0006
[Prisoner’s Dilemma, Game theory, RAND Corporation, John Nash, Anatol Rapoport, Conflict resolution, Reciprocal altruism, Robert Axelrod, Tit-for-tat]
During the postwar era, discussions of conflict and cooperation, altruism and self-interest, war and peace returned consistently to the mathematical idiom of game theory. The famed “prisoner's dilemma” (PD) game, in particular, would prove a constant point of reference in discussions of arms races and international conflict. Yet this fact presents a puzzle given how quickly critiques of game theory's brand of rationality emerged during the 1950s and 1960s. By examining the use of the PD game in three distinct contexts, this chapter sheds light on the remarkable persistence of game theory, even as the theory's empirical adequacy and normative desirability attracted criticism. Whether it was invoked in studies of teamwork and cooperation, the nuclear arms race, or the evolution of reciprocal altruism, PD's characteristic game matrix provided social, behavioral, and biological scientists with a structured language for debating some of the central problems of the day. (pages 133 - 158)
This chapter is available at:
University Press Scholarship Online

The Collapse of Cold War Rationality - Paul Erickson, Judy L. Klein, Lorraine Daston, Paul Rebecca, Thomas Sturm, Michael D. Gordin
DOI: 10.7208/chicago/9780226046778.003.0007
[Polish Crisis of the 1980s, Heuristics and biases, Daniel Kahneman, Amos Tversky, Linda problem, Irrationality, L. Jonathan Cohen, Fragmentation of rationality]
From the 1970s well into the 1990s, psychological research on human rationality was dominated by the so-called heuristics-and-biases approach as developed by Daniel Kahneman, Amos Tversky, and others. They assumed that formal rules of logic, probability theory, and rational choice theory provided the norms of rationality, and that humans all too often fall short of these standards, instead employing heuristics that can lead to biases. Political scientists and policy analysts applied this approach to many other areas, from voting behavior to arms negotiations to international crisis management. However, following a scathing critique by the philosopher L. Jonathan Cohen in 1981, many psychologists began to raise strong objections to the heuristics-and-biases approach. Eventually, the Cold War hope for a unified concept of rationality providing the tools for perfectly understanding, predicting, and dealing with political conflict was destroyed. It is not clear what should replace it. (pages 159 - 182)
This chapter is available at:
University Press Scholarship Online