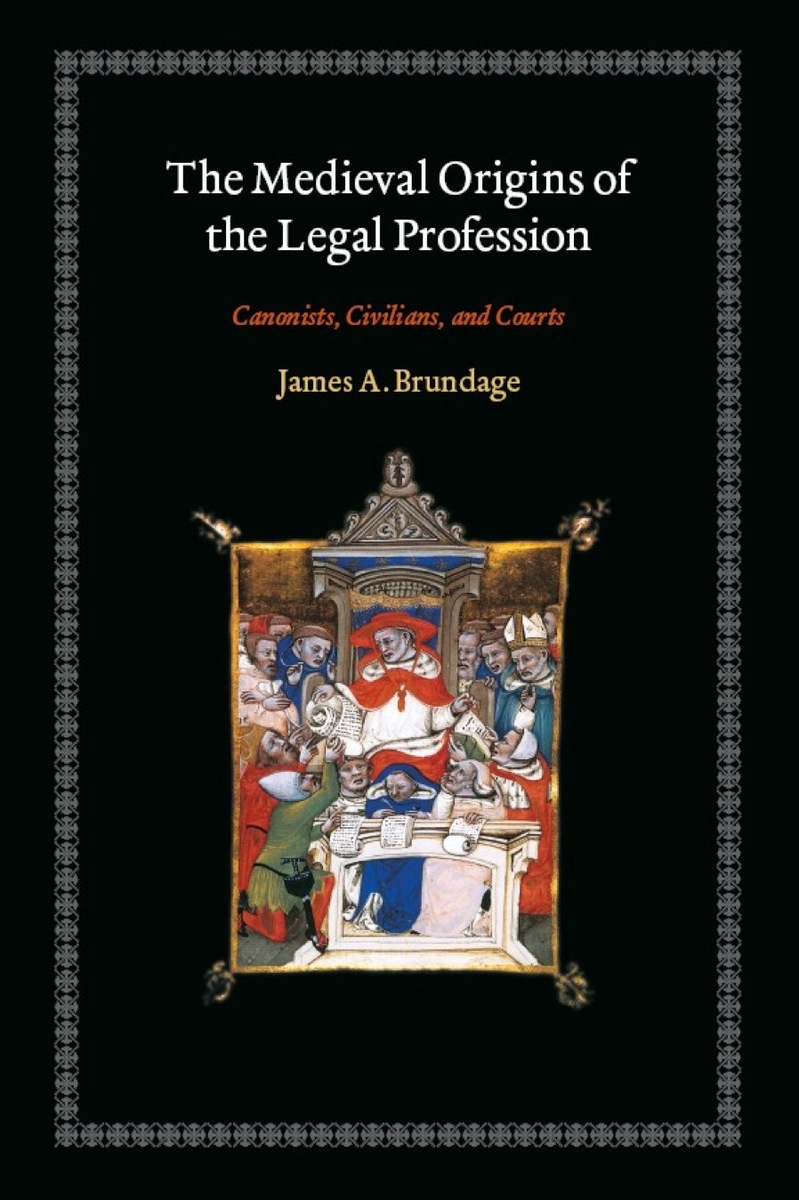 In the aftermath of sixth-century barbarian invasions, the legal profession that had grown and flourished during the Roman Empire vanished. Nonetheless, professional lawyers suddenly reappeared in Western Europe seven hundred years later during the 1230s when church councils and public authorities began to impose a body of ethical obligations on those who practiced law. James Brundage’s The Medieval Origins of the Legal Profession traces the history of legal practice from its genesis in ancient Rome to its rebirth in the early Middle Ages and eventual resurgence in the courts of the medieval church.
By the end of the eleventh century, Brundage argues, renewed interest in Roman law combined with the rise of canon law of the Western church to trigger a series of consolidations in the profession. New legal procedures emerged, and formal training for proctors and advocates became necessary in order to practice law in the reorganized church courts. Brundage demonstrates that many features that characterize legal advocacy today were already in place by 1250, as lawyers trained in Roman and canon law became professionals in every sense of the term. A sweeping examination of the centuries-long power struggle between local courts and the Christian church, secular rule and religious edict, The Medieval Origins of the Legal Profession will be a resource for the professional and the student alike.

James A. Brundage is the Ahmanson-Murphy Distinguished Professor Emeritus of History and Law at the University of Kansas. He is the author of nine books, including Law, Sex, and Christian Society in Medieval Europe, also published by the University of Chicago Press.

“James Brundage’s The Medieval Origins of the Legal Profession is a major work of original scholarship, the crowning achievement of a long and distinguished career as a historian of the medieval canon law. He has succeeded brilliantly in this first general account of the emergence of canon lawyers as a recognizable professional group. This book will, undoubtedly, be recognized as a work of fundamental importance to all scholars working on canon law or indeed more widely on medieval lawyers.”

“A marvelously comprehensive survey on the origins of the legal profession that will provide an agenda for research for years to come. With wit and style, James Brundage is the first to have written a book that covers all this territory: the origins of lawyers in European society as well as their professional associations, status, education, and work. The Medieval Origins of the Legal Profession will be read and used by undergraduates, law students, and historians alike.”
— Kenneth Pennington, Catholic University of America School of Law

“Long-awaited, Professor Brundage’s history of the medieval (and ancient Roman) origins of the legal profession was well worth waiting for. Brundage masterfully weaves together the history of the teaching of law as an academic subject, the explosion of new sources of law, the emergence of the university, the emergence of formal courts, and the development of Romano-canonical procedure. All these topics, many of which are quite controversial, are handled with a deftness and clarity that provokes admiration and, for those of us who have tried to write about the same things, a tinge of envy. This book will stand for many years as a monument, not only in the history of the legal profession but also in the history of European law.”

“This book . . . has been forty years in the making, and given its richness, the reader can be grateful for those decades of research.”

“The first several chapters provide sparkling synopses of legal procedures and the roles of legal experts during the Roman Empire, the early Middle Ages, and the beginnings of the revival of Roman law in the eleventh and twelfth centuries, which is ascribed to the powerful texts that drove it. . . . Brundage’s discussion of the other key text of the legal revival, Gratian’s Decretum, is the best lucid summary of the highly technical paleographic and legal research one is likely to find. . . . To someone coming fresh to medieval canon law, Brundage's is one of the first books to confront. It is readable, at times colorful, informative, and sound.”

"This is a book that will have appeal for the generalist reader looking for a broad-spectrum understanding of the subject as well as a more specialist reader whose specific interests lie in one of the aspects of the legal profession. Brundage's style is easy to read and his descriptions of what actually occurred in the legal faculties or in the courtrooms of the period are entertaining. . . . A significant work that will assist researchers and students for many years."
— Diana Jefferies, Parergon

"[A] beautifully written book. . . . It contains a wealth of information which is communicated effortlessly in the easy style for which Brundage is known. This book should be required reading, not just for those with an interest in legal history, but for anyone wishing to explore the origins of the legal profession in Western Europe."
— Paul du Plessis, Edinburgh Law Review

"Brundage has provided us with a lucid and informative account of how law became a profession in the Middle Ages, a factor in the larger development of the learned professions in the Western world."
— Thomas M. Izbicki, Review of Politics

1 The Foundation: The Roman Legal Profession

3 The Legal Revival of the Twelfth Century

4 Church Courts, Civil Procedure, and the Professionalization of Law

6 The Formation of an Educated Elite: Law Schools and Universities

10 The Practice of Canon Law

11 Rewards and Hazards of the Legal Profession

Conclusion: The Tradition of the Legal Profession