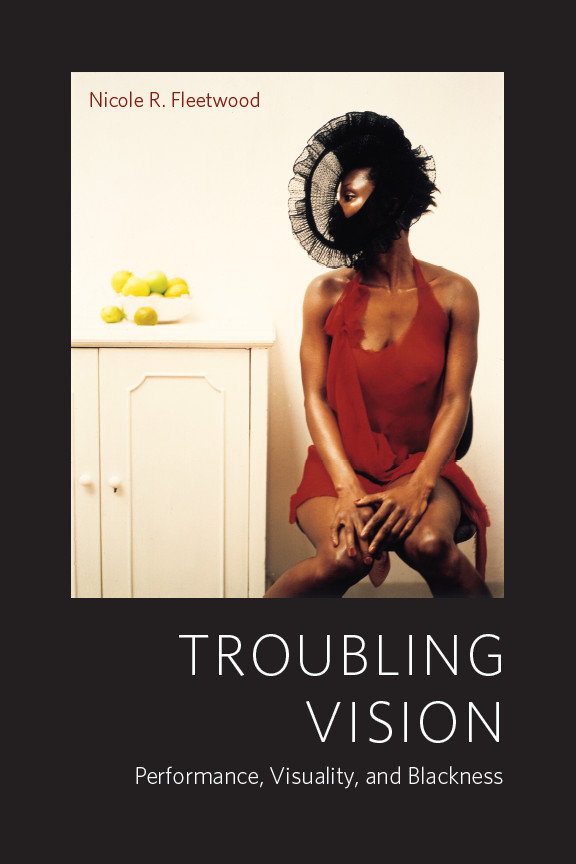 Troubling Vision addresses American culture’s fixation on black visibility, exploring how blackness is persistently seen as a problem in public culture and even in black scholarship that challenges racist discourse. Through trenchant analysis, Nicole R. Fleetwood reorients the problem of black visibility by turning attention to what it means to see blackness and to the performative codes that reinforce, resignify, and disrupt its meaning. Working across visual theory and performance studies, Fleetwood asks, How is the black body visualized as both familiar and disruptive? How might we investigate the black body as a troubling presence to the scopic regimes that define it as such? How is value assessed based on visible blackness?


Fleetwood documents multiple forms of engagement with the visual, even as she meticulously underscores how the terms of engagement change in various performative contexts. Examining a range of practices from the documentary photography of Charles “Teenie” Harris to the “excess flesh” performances of black female artists and pop stars to the media art of Fatimah Tuggar to the iconicity of Michael Jackson, Fleetwood reveals and reconfigures the mechanics, codes, and metaphors of blackness in visual culture.


“Troubling Vision is a path-breaking book that examines the problem of seeing blackness—the simultaneous hyper-visibility and invisibility of African Americans—in US visual culture in the last half century. Weaving together critical modes and methodologies from performance studies, art history, critical race studies, visual culture analysis, and gender theory, Fleetwood expands Du Bois’s idea of double vision into a broad questioning of whether ‘representation itself will resolve the problem of the black body in the field of vision.’ With skilled attention to historical contexts, documentary practices, and media forms, she takes up the works of a broad variety of cultural producers, from photographers and playwrights to musicians and visual artists and examines black spectatorship as well as black spectacle. In chapters on the trope of ‘non-iconicity’ in the photographs of Charles (Teenie) Harris, the ‘visible seams’ in the digital images of the artist Fatimah Tuggar, and a coda on the un-dead Michael Jackson, Fleetwood's close analyses soar. Troubling Vision is a beautifully written, original, and important addition to the field of American Studies.”—Announcement of the American Studies Association for the 2012 Lora Romero First Book Publication Prize

Nicole R. Fleetwood is assistant professor of American studies at Rutgers University and an art consultant who has worked with numerous museums and art institutions.

“Troubling Vision contributes vitally to new work in visual and performance studies as well as black popular culture. The book’s sophisticated renderings of blackness reveal the significance of seeing in feminist media, photographs, and fashion from the Harlem Renaissance to Michael Jackson. A fascinating study!”

“What kind of fetish is the black body, and how do traditional logics of racial visibility reproduce its ‘troubling’ presence across representational genres and pop cultural forms? Nicole Fleetwood has crafted a truly powerful and compellingly interdisciplinary answer to those interconnected questions, recalibrating and superseding age-old debates about the politics and poetics of visual culture. Troubling Vision demonstrates how visual and other artists—photographers and playwrights, performance artists and pop singers—confound the tropes of pathology that have long prefigured and overdetermined views of blackness as conspicuous difference. This very readable and theoretically sophisticated book focuses on some of the ways in which black artists resist the too-easy lure of self-evident iconicity, leaving subtle and not so subtle traces of the hard work that debunking racist stereotypes entails. Fleetwood’s offering is smart, at times quite personal, even moving, and a must-read for scholars working at the nexus of race and performativity, African American studies, and visual theory.”
— John L. Jackson Jr., University of Pennsylvania

“A compelling contribution to scholarship on blackness and visuality, this text provides a heterogeneous yet complimentary sampling of black visual artists who, in method and form, challenge that power-laden visual exchange by exposing their flesh in excess, by making doubly visible the seams holding dominant discourses together, and by celebrating the non-iconic, everyday performances of blackness.”
— Women & Performance

“In Troubling Vision, Fleetwood effectively engages multiple theories from across disciplines to offer fresh readings of cultural texts that question black visibility. She gives us a new language with which to disrupt narratives of blackness as overdetermined difference, as well as a new way of seeing black subjectivity and the black body in performance and visual culture.”
— Theatre Journal

Two/ Her Own Spook

Coda/ The Icon Is Dead