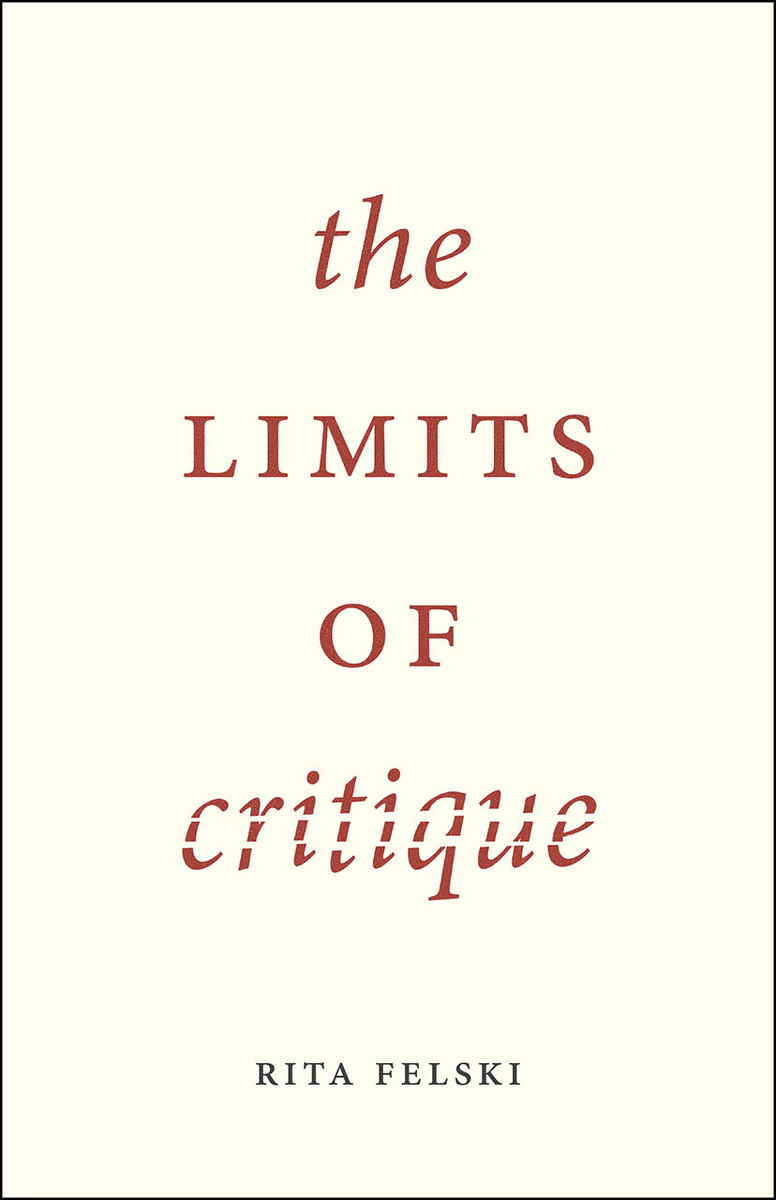 Why must critics unmask and demystify literary works? Why do they believe that language is always withholding some truth, that the critic’s task is to reveal the unsaid or repressed? In this book, Rita Felski examines critique, the dominant form of interpretation in literary studies, and situates it as but one method among many, a method with strong allure—but also definite limits.

Felski argues that critique is a sensibility best captured by Paul Ricoeur’s phrase “the hermeneutics of suspicion.” She shows how this suspicion toward texts forecloses many potential readings while providing no guarantee of rigorous or radical thought. Instead, she suggests, literary scholars should try what she calls “postcritical reading”: rather than looking behind a text for hidden causes and motives, literary scholars should place themselves in front of it and reflect on what it suggests and makes possible.

By bringing critique down to earth and exploring new modes of interpretation, The Limits of Critique offers a fresh approach to the relationship between artistic works and the social world.

Rita Felski is the William R. Kenan Jr. Professor of English at the University of Virginia and the editor of New Literary History. She is the author of several books, including, most recently, Uses of Literature and Literature after Feminism, the latter also published by the University of Chicago Press.

“A major theorist with a lively prose and an equally lively use of metaphor, Felski has always been where the action is. She has now written a book that will get all of us to take another look at what we’ve been doing. The Limits of Critique will shock some and elate others. No one will feel neutral, and no one can afford not to read this book.”
— Wai Chee Dimock, Yale University

“Timely, well-written, and compelling. This is that rare book that offers persuasive answers to a question many literary scholars are asking today, yet also promises to open new conversations that will continue into the future. The Limits of Critique should be required reading for all lovers of literature.”
— Mary Poovey, New York University

“Some books are so incisive and timely that they seem inevitable. . . . The Limits of Critique is such a book. By exploring its limits, Felski frees critics from relying on critique as the gatekeeper of literary studies and offers a prescient guide to life in a postcritical world.”
— Los Angeles Review of Books

"I sense that Felski wants us to dispense with the mood of mysterious purposiveness taken with literary works and with the influence machine apparatus and its moral psychology. Therein lies the book’s greatest and most ambitious provocation: its claim that aesthetic works have nothing to hide and that there is no ghost in the machine. By admitting of this fact we may reacquire the pleasures of criticism."
— Critical Inquiry

“What interests Felski is the critic’s task—which is to be suspicious of what lies beneath the surface of story, and she examines the methodology required to tease out that meaning and the variety of literary and psychological tools the critic uses to do so.  . . . Recommended.”
— Choice

“Rita Felski’s The Limits of Critique . . . argues compellingly that our critical habits have unwittingly become trapped within a range so pinched we can barely turn our heads to see that there might be other possibilities available. She offers a nuanced description of the state of theory-heavy academic literary critique, and some proposals for how we might finally start to move beyond it.”
— ArtsATL

“Felski’s prose is bold and engaging throughout, and we are privy to her dexterous style which successfully surveys an expansive range of canonical and local critical narratives. . . . Painting a provocative landscape of contemporary critical practices, The Limits of Critique will undoubtedly resonate both with readers who are entrenched in the US culture that Felski describes as well as those external to it.”
— Textual Practice

“Perhaps the most ambitious reappraisal of the discipline to appear since theory’s heyday.”
— Times Literary Supplement

“Felski’s punchy colloquial style eases our path . . . and her footnotes collect any number of easy-to-overlook gems . . . including not a few from the pages of New Literary History, the journal she has revived so impressively. . . . Her exasperation with the histrionics of critique and its bullying of literature is merited and persuasive.”
— American Literary History Online Review

"Felski suggests that authors, readers and critics are not the only actors involved in interpretation, there are non-humans, texts, journals, circulation systems, but moreover there are hermeneutics, theories and other techniques, including critique. Within this complex network, critique has its limitations, and there are numerous post-critical possibilities."
— Cultural Sociology

Introduction
DOI: 10.7208/chicago/9780226294179.003.0000
[hermeneutics of suspicion, critique, thought style, affect, rhetoric]
What exactly do literary scholars do when they engage in critique and what else might they do instead? This introduction offers neither a philosophical meditation nor a historical explanation, but a scrutiny of a thought style that slices across differences of field and discipline. The emphasis is on details of affect and argument, rhetoric and reasoning. The book's over-all orientation is pragmatic--different methods are needed for the differing aims of criticism and the current dominance of critique is excluding a wide range of intellectual and affective possibilities. The introduction distinguishes the argument of the book from recent arguments for a New Aesthetics, New Formalism, or New Ethics: in contrast to these approaches, the book sees the singular and the social aspects of art as conjoined rather than opposed. The ultimate aim of the book is to encourage scholars in literary studies to expand their repertoire of critical moods, while also embracing a richer array of critical methods. (pages 1 - 13)

1. The Stakes of Suspicion
DOI: 10.7208/chicago/9780226294179.003.0001
[mattering, value, literary studies, mood, suspicion, skepticism, paranoia, hermeneutics]
This chapter begins by invoking the legitimation crisis in literary studies and the recent return to questions of value and "mattering." It argues that Paul Ricoeur's phrase "the hermeneutics of suspicion" offers a way of redescribing current practices within literary and cultural studies. A detailed description of suspicion (rather than scepticism or paranoia) as a prevailing "critical mood" is followed by an argument for the relevance of hermeneutics to our understanding of critical methods. The chapter also sketches out a brief history of suspicious reading, including its philosophical, literary, vernacular, and professional modes. This history makes it clear that suspicion has no essential meaning and no automatic claim to either rigor or radicalism. It thus frees up literary studies to embrace a wider range of affective styles and modes of argument. (pages 14 - 51)

2. Digging Down and Standing Back
DOI: 10.7208/chicago/9780226294179.003.0002
[symptomatic reading, surface reading, psychoanalysis, Marxism, Poststructuralism, denaturalizing, defamiliarizing, Sigmund Freud, Roland Barthes, Judith Butler]
Chapter 2 examines two constellations of spatial metaphors that drive practices of suspicious reading. The first, often known as symptomatic reading and associated with traditional Marxist and Freudian thought, pivots on a division between manifest and latent, overt and covert. Reading is imagined as an act of digging down to arrive at a repressed or obscured reality. A second approach, associated with poststructuralism, emphasizes the act of defamiliarizing or denaturalizing rather than discovery (e.g. Roland Barthes and Judith Butler). The text is no longer composed of strata; the critic does not burrow down but stands back. Insight is achieved by distancing rather than by digging, by the ironic force of critical detachment. Although one approach emphasizes depths and the other speaks the language of surfaces, both share an ethos of suspicion and a commitment to tracking down counter-intuitive and unflattering meanings that are inaccessible to ordinary readers. (pages 52 - 84)

3. An Inspector Calls
DOI: 10.7208/chicago/9780226294179.003.0003
[Plot, morality, detection, crime, game, meta-suspicion, Sherlock Holmes, Shoshana Felman]
What is the connection between detection and critique? Both are styles of suspicious reading that blend interpretation with moral judgment. And both fashion plots that allow for an identification of a guilty party. The device of the clue, for example, allows critics to read textual details as evidence of social inequality; at the same time, this evidence is generated out of their own techniques of interpretative plotting. Deconstructive critics such as Shoshana Felman question the policing work of criticism and declare the literary work not guilty. Suspicion is not eradicated, however, but transferred to the history of criticism, which is now condemned for its acts of interpretative violence (suspicion gives way to meta-suspicion). Taking a different tack, the chapter seeks to take seriously the pleasures of suspicious reading as an engrossing intellectual game that allows critics, like Sherlock Holmes, to deploy their skills and to outwit opponents. The chapter concludes by proposing that the danger of suspicious reading is less one of brutality than of potential banality. (pages 85 - 116)

4. Crrritique
DOI: 10.7208/chicago/9780226294179.003.0004
[immanent critique, negativity, politics, intellectuals, ordinary language, Frankfurt School, American Studies]
Chapter 4 argues that the idea of critique in literary and cultural studies is best captured via a five part definition. 1) Critique is secondary--a response to a prior text or state of affairs: this observation leads to a questioning of the distinction between transcendent and immanent critique. 2) Critique is negative: here we need to distinguish between specific acts of rejection or refusal and a more general stance of sceptical negativity. This negative dimension of critique is also the source of its "halo effect." 3) Critique is intellectual: the chapter queries attempts to set up a strong distinction between ordinary language and academic critique as well as the often hermetic nature of academic discourse. 4) Critique comes from below: it is often associated with a dissident politics and speaking-back to power (e.g. Frankfurt School, American Studies), and yet it also has an ambivalent relationship to oppressed groups. What, moreover, should we make of the political charge that critique has been "domesticated"? 5) Critique does not tolerate rivals: those who practice critique are unwilling to concede the merits of other methodologies, which are accused of complacency and conservatism and reduced to the shame of the uncritical. (pages 117 - 150)

5. "Context Stinks!"
DOI: 10.7208/chicago/9780226294179.003.0005
[Context, actor-network-theory, history, transtemporal, hermeneutics, agency, Bruno Latour, Marielle Mace, Yves Citton, postcritical reading]
The final chapter turns to actor-network-theory and the work of Bruno Latour to develop an alternative way of thinking about literary works. It argues that history is not a box: standard ways of thinking about historical context are unable to explain how works of art can speak across time. We need models of textual mobility that refuse to be browbeaten by period boundaries. Literary texts can in turn be thought of as non-human actors--a claim that requires a revision of common assumptions about the nature of agency. A text's ability to make a difference derives not from its repudiation of the world, but its many ties and connections to the world. These ideas lead, finally, to a notion of post-critical reading that can do better justice to the transtemporal liveliness of texts and the co-constitution of texts and readers--without opposing thought to emotion or divorcing intellectual rigor from affective attachment. Here the chapter considers the rethinking of hermeneutics in the work of Marielle Mace and Yves Citton. (pages 151 - 185)

In Short
DOI: 10.7208/chicago/9780226294179.003.0006
[literature, value, critique, affect, postcritical]
The current questioning of critique is not a shrug of defeat or a capitulation to conservative forces. Rather, it signals an attempt to articulate a positive vision for humanistic thought in the face of growing skepticism about its value. The conclusion to the book recapitulates the limitations of critique: its one-sided view of the work of art; its affective inhibition; its picture of society; and its methodological asymmetry. It argues for an alternative approach to literature: one that can adequately engage its affective and experiential dimensions and explore its entanglement with social life without reducing texts to either heroic dissidents or slavish sycophants of power. Such a reorientation can inspire more publically persuasive rationales for why literature and the study of literature matter. (pages 186 - 194)