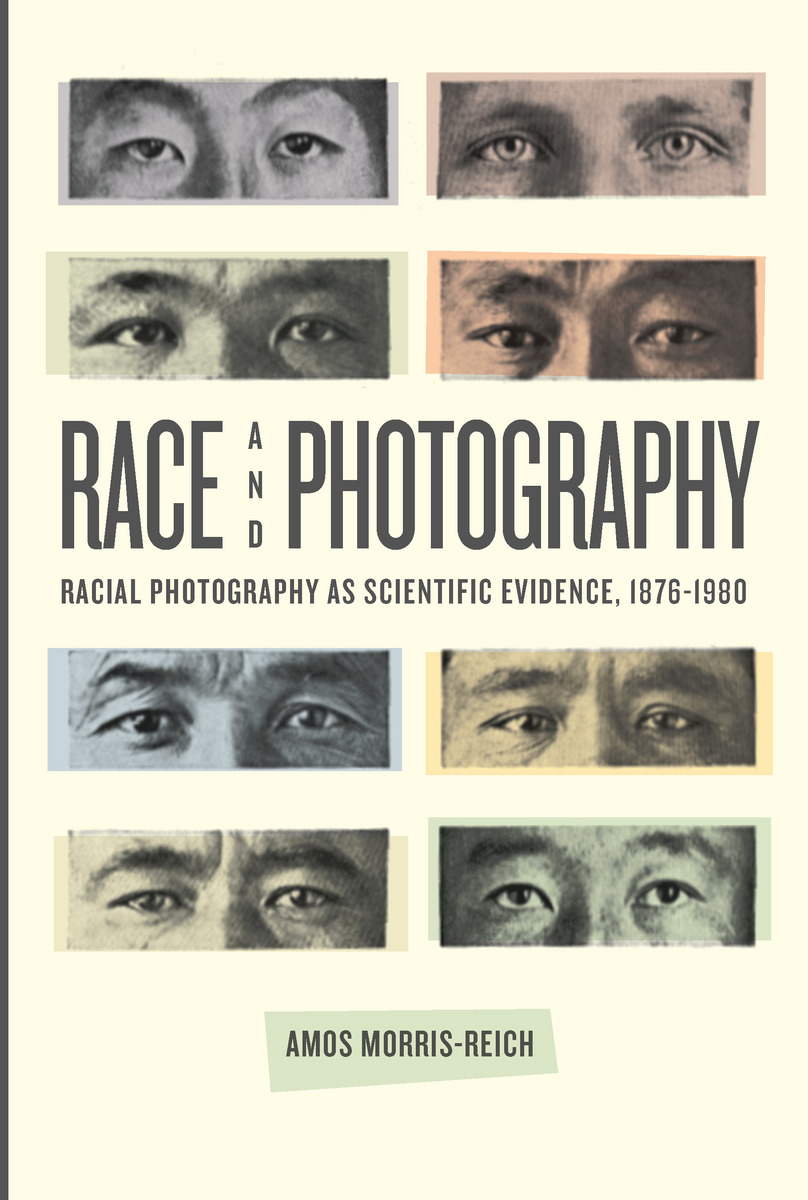 Race and Photography studies the changing function of photography from the 1870s to the 1940s within the field of the “science of race,” what many today consider the paradigm of pseudo-science. Amos Morris-Reich looks at the ways photography enabled not just new forms of documentation but new forms of perception. Foregoing the political lens through which we usually look back at race science, he holds it up instead within the light of the history of science, using it to explore how science is defined; how evidence is produced, used, and interpreted; and how science shapes the imagination and vice versa.

Exploring the development of racial photography wherever it took place, including countries like France and England, Morris-Reich pays special attention to the German and Jewish contexts of scientific racism. Through careful reconstruction of individual cases, conceptual genealogies, and patterns of practice, he compares the intended roles of photography with its actual use in scientific argumentation. He examines the diverse ways it was used to establish racial ideologies—as illustrations of types, statistical data, or as self-evident record of racial signs. Altogether, Morris-Reich visits this troubling history to outline important truths about the roles of visual argumentation, imagination, perception, aesthetics, epistemology, and ideology within scientific study.

Amos Morris-Reich is a professor in the Department of Jewish History and the director of the Bucerius Institute for Research of Contemporary German History and Society at the University of Haifa. He is the author of The Quest for Jewish Assimilation in Modern Social Science and the editor of collected essays by Georg Simmel and Sander Gilman.

“In this brave, clear-eyed book, Morris-Reich confronts racial photography on its own terms: as a form of scientific evidence. Without for a moment forgetting the political contexts of racial photography, he shows that ideology alone is insufficient to explain the origins, varieties, and power of racial photography and the aims of its diverse practitioners. This is a remarkably attentive book: scrupulously attentive to historical context, the shifting epistemologies that framed photography, and, above all, the visual details of the photographs themselves.”
— Lorraine Daston, Max Planck Institute for the History of Science

“An important, smart book about how visual argumentation works. It goes beyond its primary subject—the way photographs of Jews were used in nineteenth- and twentieth-century German studies of race—and even beyond the study of photography or anthropology to the area of visual studies as a whole. Its clear and important methodological analyses contribute substantially to this subject.”
— Margaret Olin, Yale University

“This brilliantly researched, brave, and sophisticated analysis offers a much-needed account of how photographs worked as evidence within racial science. By bringing scientific purpose—however aberrant—to the center of his analysis, Morris-Reich demonstrates how certain forms of photographic practice and evidence became thinkable at given historical moments with their accompanying scientific agendas. While the larger devastating and catastrophic consequences are well known, this important and thoughtful book helps us to understand debates about race as a deeply woven yet fluid matrix of the methodological, ideological, and sociological forces that produced these photographs as scientific tools of racial imagination.”
— Elizabeth Edwards, De Montfort University

"Race and Photography is an extraordinary book exploring the entanglements of race, photography, and visual perception to illuminate a complex network of people, practices, theories, and technologies."
— Studies in History and Philosophy of Biological and Biomedical Sciences

Note about Scanning and Reproduction of Photographs

Introduction - Amos Morris-Reich
DOI: 10.7208/chicago/9780226320915.003.0001
[practical epistemology, history of racial science, history of pseudo-science, reactionary logic, perception, imagination]
The Introduction frames the study of racial photography as scientific evidence. Based on the works of Lorraine Daston and Ian Hacking, the chapter develops the notion of “practical epistemology” as a method of analyzing different author’s assumptions that guided their uses of photography in the study of race. It then characterizes the form of “reactionary logic” to which the majority of writers studied in this book adhered, and the contradiction that undercut the work of racial writers: the belief in the self-evidence of race as well as a belief in its threatening and growing fluidity and concealment. It traces the appearance of the term “pseudo-science” as a countering to the term “Jewish science.” The chapter ends in arguing that the imagination is as important for the history of racial photography as visual perception. (pages 1 - 33)
This chapter is available at:
University Press Scholarship Online

1. The Type and the Gaze: Racial Photography as Scientific Evidence, 1876–1918 - Amos Morris-Reich
DOI: 10.7208/chicago/9780226320915.003.0002
[type, Gaze, photography and measurement, anthropometric photography, composite photography, standardization, observation of biological variety, photography and Mendelian genetics, seeing as constitutive activity, imagination]
Chapter One reconstructs the use of racial photography as scientific evidence between 1876 and 1922. It commences with the Dammann brothers' Atlas, in which “racial type” photographs illustrate races conceived in terms of “types.” It then proceeds to examine the works of Alphonse Bertillon, Francis Galton and Rudolf Martin who thought of photography as a form of scientific measurement.The second part of the chapter reconstructs a parallel but lesser-known genealogy in which photography was employed in the observation of biological variety and was tightly connected to the rise of Mendelian genetics. This section focuses on Carl Heinrich Stratz, Redcliffe Salaman, and Eugen Fischer. The chapter concludes with discussions in the history and philosophy of art concerning “seeing” examining two books, Rembrandt (1916) by Georg Simmel and Principles in Art History by Heinrich Wölfflin (1916). (pages 34 - 84)
This chapter is available at:
University Press Scholarship Online

2. Racial Photographs from Icons to Schemes: The “Case” of Central and Eastern European Jews, 1880–1927 - Amos Morris-Reich
DOI: 10.7208/chicago/9780226320915.003.0003
[photography in scientific argumentation, idea of Jews as mixed race people, illustration of argument, iconic photograph, serialization of photographs, photographic matrix, type, art and science, photography as medium, archive and imagination]
Chapter Two shifts perspective from an investigation of various photographic methods and techniques to close analysis of the actual roles of photographs in scientific argumentation. Focusing on the single most influential racial definition of Jews between the 1880s and the 1920s- the idea of the Jews as a mixed race people- the chapter analyzes the role photographs played in the scientific economy of this idea. In this vein, the chapter traces a genealogy from Felix von Luschan, through Maurice Fishberg, to Sigmund Feist. The analysis reveals a transformation in the use of photographs, from illustrations of an argument in the 1890s to the gradual emergence of serialized photographs in the 1910s. It shows that, in the transformation of the racial photograph from icon to matrix, photographs were more thoroughly integrated into scientific demonstration. The chapter agues that this transformation destabilized definitions of both “type” and “race”. The chronologically ordered narrative is interrupted by two excurses that intersect the immediate subjects of the chapter. The first focuses on the interaction between Felix von Luschan and Hermann Struck, and explores the exchange between art and science. The second reflects on the relationship between the archive and the imagination in the history of race and photography.  (pages 85 - 116)
This chapter is available at:
University Press Scholarship Online

3. Serialization as Construction of Meaning: The Photographic Practice of Hans F. K. Günther in Context - Amos Morris-Reich
DOI: 10.7208/chicago/9780226320915.003.0004
[Aryan seeing and Anschauung, hermeneutics of suspicion, de-habituation and Verfremdung, serialization and layout, Wittgenstein, family resemblance, science and propaganda, imagination, photography, invisible]
Chapter Three analyzes the photographic practice of Hans F.K. Günther, the most popular theoretician of race in Weimar and Nazi Germany, who provided Weimar and Nazi Germany with a racial visual code. Günther employed photographs to concretize ideas, rendering them accessible to a wide public. The chapter shows how he concretized Houston Stewart Chamberlain's idea of a specific form of Aryan “seeing,” merging scientific objectivity with racial relativism and bringing together Fischer's “Mendelian photography” with Chamberlain's concept of Anschauung. Applying Paul Ricoeur's notion of “hermeneutics of suspicion” to Günther's choice and layout of photographs, the chapter demonstrates that Günther transformed his audience into “suspicious” observers. The chapter debates that Günther applied in practice techniques and ideas of de-habituation developed by Russian formalist Viktor Shklovsky's and playwright Berthold Brecht. Günther’s photographic series are compared with Wittgenstein's notion of “family resemblance,” pointing to transformations in the notion of the “Jewish type.” The chapter ends with the relationship between the visible and invisible in Günther’s use of photography, and the role of photography for the totalization of experience. (pages 117 - 155)
This chapter is available at:
University Press Scholarship Online

4. Racial Photographs as “Thought Experiments”: The Photographic Method of Ludwig Ferdinand Clauß - Amos Morris-Reich
DOI: 10.7208/chicago/9780226320915.003.0005
[thought experiments, notion of the example, exemplary validity, phenomenology, imagination, Gestalt, photograph as self-evident sign, Nazi conception of photography, Nazi culture]
Chapter Four turns to a distinct photographic-racial method through the historical and philosophical contextualization of the work of racial phenomenologist Ludwig Ferdinand Clauß. The chapter opens with a close analysis of two case studies, concerning “the Jews” and “the landscape,” through which the constitutive role of photography in generating race-relative forms of seeing is brought to the surface. The chapter argues that Clauß’s photographic series follow the logic of particulars in which human specimens are “examples” according to a particular philosophical tradition. Approaching Clauß through Hannah Arendt’s reading of Kant’s notion of the imagination, the chapter suggests that Clauß conceptualizes the photograph as bringing together sensibility and understanding. The chapter further discusses Clauß’s use of photographs as demonstrative “thought experiments” as closely tied to the Gestalt philosophical and psychological traditions and Edmund Husserl’s phenomenology. All these culminate in the transformation of the racial photograph from evidence into self-evidence, where the medium and the thing converge. The last part of the chapter shows how semantically, ideologically, and aesthetically, Clauß’s photographic method and practices interlock with other key aspects of National Socialist culture. (pages 156 - 186)
This chapter is available at:
University Press Scholarship Online

5. Racial Photography in Palestine - Amos Morris-Reich
DOI: 10.7208/chicago/9780226320915.003.0006
[epistemology of small differences, good example, photography and statistics, Yemenite Jews, science and art]
Chapter Five documents the shift of racial photographic studies of Jews from Europe to Palestine. The chapter studies the two most prominent authors who wrote on race and employed photography in Palestine: Arthur Ruppin, and Erich Brauer. Through “the epistemology of small differences,” archival study and comparison of photographic differences in the German, Hebrew, and English editions of their books, the chapter identifies the “good example” and brings out the specificity of photography as compared with statistics. The last part of the chapter studies the “case” of Yemenite Jews, arguably the most racialized group in the context of Jewish Palestine. Focusing on two prominent photographers, Ephraim Moses Lilien and Helmar Lerski, whose art touched racial discourse, the chapter shows the two-way flow (and fluid boundaries) between art and science. All the subjects of this chapter were educated in Germany and continued to publish in German. The Palestine chapter, therefore, constitutes a “parallel history” inseparable from its German context. (pages 187 - 222)
This chapter is available at:
University Press Scholarship Online