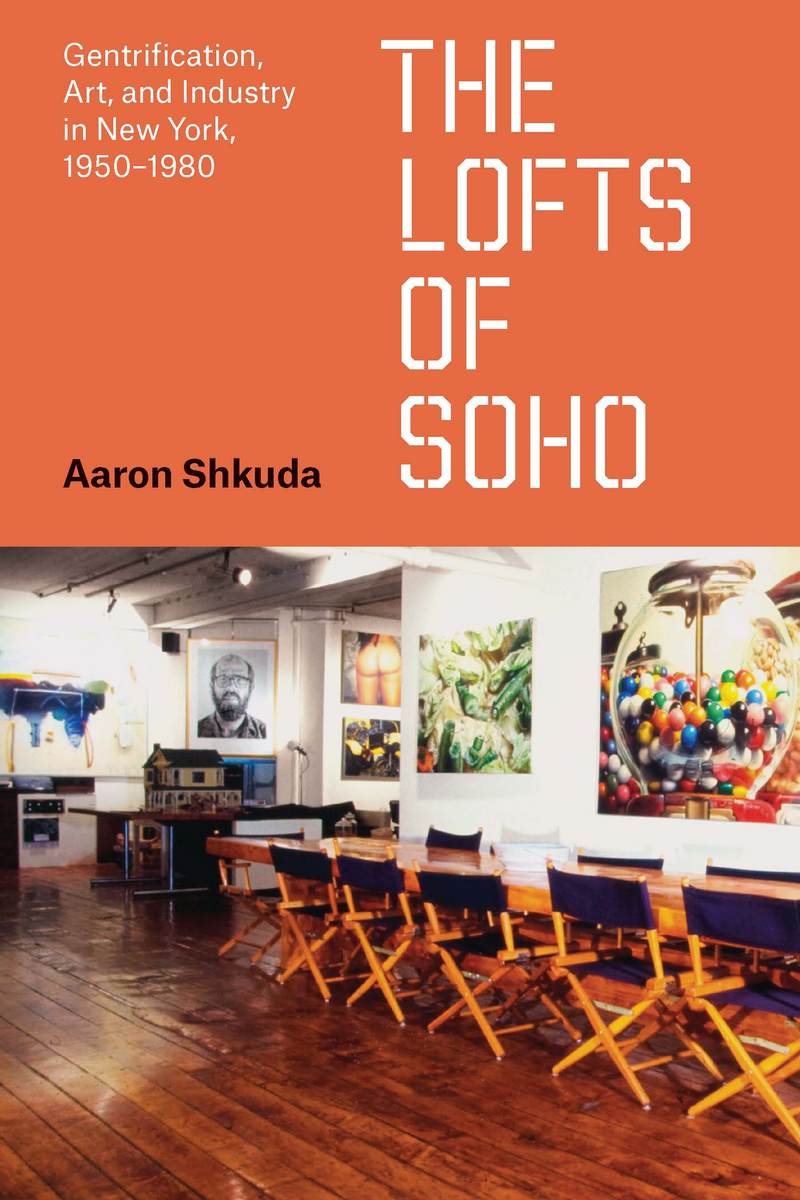 American cities entered a new phase when, beginning in the 1950s, artists and developers looked upon a decaying industrial zone in Lower Manhattan and saw, not blight, but opportunity: cheap rents, lax regulation, and wide open spaces. Thus, SoHo was born. From 1960 to 1980, residents transformed the industrial neighborhood into an artist district, creating the conditions under which it evolved into an upper-income, gentrified area. Introducing the idea—still potent in city planning today—that art could be harnessed to drive municipal prosperity, SoHo was the forerunner of gentrified districts in cities nationwide, spawning the notion of the creative class.

In The Lofts of SoHo, Aaron Shkuda studies the transition of the district from industrial space to artists’ enclave to affluent residential area, focusing on the legacy of urban renewal in and around SoHo and the growth of artist-led redevelopment. Shkuda explores conflicts between residents and property owners and analyzes the city’s embrace of the once-illegal loft conversion as an urban development strategy. As Shkuda explains, artists eventually lost control of SoHo’s development, but over several decades they nonetheless forced scholars, policymakers, and the general public to take them seriously as critical actors in the twentieth-century American city.

Aaron Shkuda is project manager of the Princeton-Mellon Initiative in Architecture, Urbanism, and the Humanities at Princeton University. He lives in New Jersey.

“The Lofts of SoHo is a groundbreaking work that reshapes existing literature on deindustrialization and urban decline. It’s a fascinating work of cultural history and one of the few urban history monographs to look at gentrification. Shkuda gives readers an engaging and richly detailed text that tells a compelling and original story.”
— Suleiman Osman, George Washington University

“Shkuda has written a careful and balanced history of New York City’s famous SoHo neighborhood that demonstrates that the actions of individuals, not large forces, created this prototypical artists’ district and popularized the quintessential urban dwelling—the loft—both of which have inspired countless imitations across the United States. Artists, Shkuda reveals, led the transformation of the old industrial district by seeking out the vacant factory lofts in which to live and work, lobbying the government to allow them to reside in the industrial zone, and creating fashionable-looking living spaces that would soon become the symbol of hip urbanity. Going beyond ideological stereotypes, Shkuda traces the chain of attraction that triggered gentrification. To be near SoHo’s artists, entrepreneurs set up art galleries and creative boutiques, which in turn lured hordes of visitors who came to see the art and enjoy the ambience; only then did the developers arrive and rents soar. Lofts of SoHo illuminates the way that artists searching for inexpensive spaces in the city have revived city neighborhoods and in the process created an alternative form of urban redevelopment.”
— Alexander von Hoffman, Harvard Graduate School of Design

“Thoughtful and erudite, Shkuda’s remarkable book on the transformation of SoHo offers a wholly new and fascinating perspective on the economic, cultural, and political forces at play. The implications of Shkuda’s book extend far beyond the neighborhood of study and right into the very heart of the debate around the arts and neighborhood development.”
— Elizabeth Currid-Halkett, University of Southern California

“In The Lofts of SoHo, historian Shkuda demolishes the stick-figure myth of pioneering artists, greedy landlords, and entitled professionals and illuminates the complexity of gentrification. In doing so, he reveals the origins of the idea that the arts possess the capacity to revitalize derelict city districts.”
— Los Angeles Review of Books

“The transformation of industrial districts into expensive real estate is often what developers and planners have in mind when they talk about ‘Soho-ization,’ but Shkuda insists that the process upon which many future rehabilitation plans have been based was itself never planned. Rather, SoHo’s history needs to be reconsidered in the context of the sociopolitical and economic landscape of the mid-century city. The Lofts of SoHo is a welcome addition to the field of urban history, offering an engaging narrative of a contest over space and the unintended consequences of the politicization of real estate.”
— Journal of Social History

“The Lofts of Soho examines the tangled commercial, governmental, and artistic forces that sought to remake the area south of Houston Street and north of Canal Street.”
— Hyperallergic

“An impressive amount of historical detail and argumentative clarity. . . .The achievement and strength of Shkuda’s book lies in its very detailed account of the history of artist-led urban redevelopment and eventual gentrification in SoHo.”
— KULT_online

Introduction: Art, Artists, and Gentrification - Aaron Shkuda
DOI: 10.7208/chicago/9780226334219.003.0001
[artists, SoHo, New York, gentrification, urban crisis, creative placemaking, Bohemianism]
New York’s SoHo neghborhood has become a paradigm for artist-driven urban development in former idnsutrial neighborhoods. Yet, less is understood about how artists shaped SoHo’s transition from industrial area to bohemian enclave to upper-income neighborhood. Historians have only begun to examine the origins of post-WWII gentrification in American cities, and scholarly theories of gentrification and the “creative” class rarely treat artists as historical actors. A historical study of SoHo demonstrates how artists’ housing needs, political organizing, entrepreneurship, and the novel arguments they created about the role of the arts in the city generated new forms of urban living and altered scholarly understanding of the importance of the arts in urban life. (pages 1 - 11)
This chapter is available at:
University Press Scholarship Online

1. The Wastelands of New York - Aaron Shkuda
DOI: 10.7208/chicago/9780226334219.003.0002
[SoHo, New York, lofts, cast-iron, urban renewal, New York University, Housing projects, Chester Rapkin, deindustrialization]
SoHo evolved from farmland to an exclusive shopping district to an industrial area during the 18th and 19th centuries. In the mid-1900s, the area gained its distinctive architectural form, the cast-iron loft. The physical development of the neighborhood ceased in the 1890s and by 1950 surviving industrial businesses struggled to operate. Because the area contained older structures, marginal industries, and was located near more lucrative parts of the city, civic leaders including Robert Moses supported several urban renewal projects in SoHo. Chester Rapkin’s 1963 study, which argued that SoHo was an important incubator of industrial jobs for the city’s low-income African American and Latino populations, saved the area from being replaced by a middle-income housing project. (pages 12 - 41)
This chapter is available at:
University Press Scholarship Online

2. Making the Artist Loft - Aaron Shkuda
DOI: 10.7208/chicago/9780226334219.003.0003
[lofts, artists, SoHo, New York, renovation, community, adaptive reuse]
Artists invented a new form of housing, the residential loft, in former industrial neighborhood of SoHo. To do so, they transformed the architectural features that hindered modern manufacturing made lofts manufacturing into the hallmarks of an interior design aesthetic that privileged open, flexible interiors, natural light, minimalism, and the creative use of the spaces’ industrial pasts. To create their lofts, artists completed most renovations themselves, taking on significant personal and financial risk to do so. SoHo’s uniquely supportive artist community played a critical role in allowing residents to negotiate this process. (pages 42 - 70)
This chapter is available at:
University Press Scholarship Online

3. Gray Areas and Industrial Slums: The Lower Manhattan Expressway - Aaron Shkuda
DOI: 10.7208/chicago/9780226334219.003.0004
[SoHo, New York, highways, David Rockefeller, urban renewal, freeway revolt, urban development, financial districts, Downtown-Lower Manhattan Association]
From the early 20th century through 1970, plans were in place to build a major highway, the Lower Manhattan Expressway, across Broome Street in SoHo. The project gained renewed life in the 1950s and 60s thanks to the efforts of David Rockefeller and the Downtown-Lower Manhattan Association, who saw the highway as supporting development of the Lower Manhattan financial district. The project’s ultimate failure allowed SoHo to develop as an artist colony and, in time, a gentrified neighborhood. Yet, the project’s slow death also depressed property values, allowing artists to obtain loft space, which also drove the area’s residential transition. (pages 71 - 91)
This chapter is available at:
University Press Scholarship Online

4. Artist Organizations, Political Advocacy, and the Creation of a Residential SoHo - Aaron Shkuda
DOI: 10.7208/chicago/9780226334219.003.0005
[artists, lofts, politics, grassroots, zoning, SoHo, New York]
Because living in a loft was illegal, SoHo artists faced the threat of eviction. A series of loft fires and inspections by city agencies led residents to create the Artists Tenants Association (ATA). The group’s efforts, including a march on City Hall and an art strike, led to the Artist in Residence (A.I.R.) Program, the first policy that temporarily allowed artists to live legally in lofts. The ATA pushed policymakers to take the first steps to legalize residential lofts. Moreover, through their advocacy the ATA created arguments about the role of artists in a changing urban economy shaped by suburbanization and deindustrialization that helped reshape scholarly and popular understandings of the role of the arts in urban areas. (pages 92 - 106)
This chapter is available at:
University Press Scholarship Online

5. Moving Art Downtown - Aaron Shkuda
DOI: 10.7208/chicago/9780226334219.003.0006
[artists, art dealers, galleries, SoHo, New York, commerce]
In the late 1960s, art galleries began to open in SoHo. For the first time in the city’s history, art dealers choose to locate near artists rather than collectors. Commercial galleries, non-profit cooperatives, and multi-disciplinary arts spaces appeared in large numbers. There were five major SoHo-area galleries in 1970, 80 in 1973, and more than 100 by 1979. Because wealthy collectors, government funding, and contributions of artists’ time and labor kept these institutions afloat, visitors could treat these spaces like free museums, making SoHo a destination for visitors in addition to an increasingly-vibrant residential area. (pages 107 - 132)
This chapter is available at:
University Press Scholarship Online

6. Real Estate and SoHo Politics: Loft Promotion and Historic Preservation in Lower Manhattan - Aaron Shkuda
DOI: 10.7208/chicago/9780226334219.003.0007
[artists, SoHo, New York, lofts, advocacy, zoning, real estate, historic preservation]
As more artists owned lofts through cooperatives, SoHo residents restarted their political advocacy by forming the SoHo Artists Association (SAA). Debates over the legality of lofts shifted from a focus on housing for artists to the loft as a vehicle for neighborhood transformation at a time of urban crisis. SAA members opened their lofts to the public through their activism, increasing the visibility of this housing form in the process. Artist advocacy led to changes to city and state laws that increasingly regularized loft living. The 1973 creation of a SoHo-Cast Iron Historic District further stabilized the area and led a broader public to see it as a potentially attractive place to live. (pages 133 - 157)
This chapter is available at:
University Press Scholarship Online

8. The Spread of Loft Living: Real Estate Development and Tenant Conflict in SoHo and Beyond - Aaron Shkuda
DOI: 10.7208/chicago/9780226334219.003.0009
[SoHo, New York, artists, lofts, real estate, gentrification, zoning, politics]
The value of residential lofts surpassed that of industrial loft space in the mid-1970s. Non-artists moved into SoHo in greater numbers and residents began converting lofts in the neighboring areas of Tribeca and NoHo. Because many loft residences were still illegal, some landlords began exploiting their tenants’ tenuous status to flip properties. These speculators included experienced real estate investors, but also long-time loft building owners with ties to SoHo industry and members of the neighborhood art community. Tenants fought back by staging rent strikes, taking their landlords to court, and organizing politically. Policymakers began to call for protections for loft residents, but also the expansion of loft living to a wider population. (pages 182 - 208)
This chapter is available at:
University Press Scholarship Online

Conclusion: Contemporary SoHo and the Neighborhood’s Significance - Aaron Shkuda
DOI: 10.7208/chicago/9780226334219.003.0011
[SoHo, New York, artists, lofts, gentrification, real estate]
Since the 1980s, SoHo has evolved into one of New York city’s most expensive neighborhoods and upscale retail districts. Most galleries have left, though some artists remain. Some residents moved to areas such as Long Island City and Williamsburg that went through their own artist-driven residential renaissances. As the many neighborhoods that share SoHo’s naming convention indicate, the area has evolved into a model for a specific type of artist-driven residential and commercial area that has been easy to invoke but difficult to completely emulate. (pages 230 - 238)
This chapter is available at:
University Press Scholarship Online