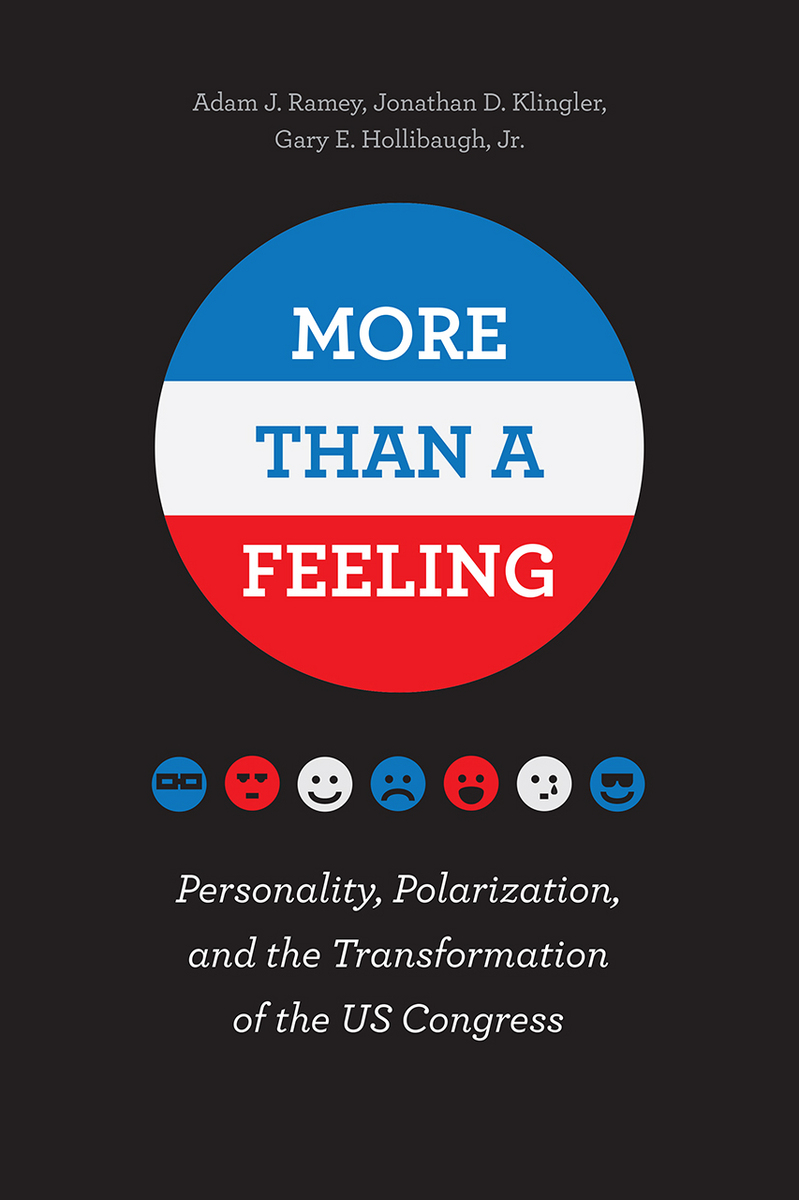 Whatever you think about the widening divide between Democrats and Republicans, ideological differences do not explain why politicians from the same parties, who share the same goals and policy preferences, often argue fiercely about how best to attain them. This perplexing misalignment suggests that we are missing an important piece of the puzzle. Political scientists have increasingly drawn on the relationship between voters’ personalities and political orientation, but there has been little empirically grounded research looking at how legislators’ personalities influence their performance on Capitol Hill.

With More Than a Feeling, Adam J. Ramey, Jonathan D. Klingler, and Gary E. Hollibaugh, Jr. have developed an innovative framework incorporating what are known as the Big Five dimensions of personality—openness to experience, conscientiousness, extraversion, agreeableness, and neuroticism—to improve our understanding of political behavior among members of Congress. To determine how strongly individuals display these traits, the authors identified correlates across a wealth of data, including speeches, campaign contributions and expenditures, committee involvement, willingness to filibuster, and even Twitter feeds. They then show how we might expect to see the influence of these traits across all aspects  of Congress members’ political behavior—from the type and quantity of legislation they sponsor and their style of communication to whether they decide to run again or seek a higher office. They also argue convincingly that the types of personalities that have come to dominate Capitol Hill in recent years may be contributing to a lot of the gridlock and frustration plaguing the American political system.

Adam J. Ramey is assistant professor of political science at New York University Abu Dhabi. Jonathan D. Klingler is an IAST Research Fellow at the Institute for Advanced Study in Toulouse. Gary E. Hollibaugh, Jr., is assistant professor of political science and a faculty affiliate at the Rooney Center for the Study of American Democracy at the University of Notre Dame.

"With More Than a Feeling, Ramey, Klingler, and Hollibaugh make the compelling case that variation in personality matters for many of the behaviors studied by congressional scholars. Creatively researched and thoroughly grounded in the relevant psychological literature, the book makes an enormous contribution to the conversation about individual differences and elite behavior.”
— Jeffery J. Mondak, University of Illinois at Urbana-Champaign

“A fascinating statistical study of Congressional personalities and the way those traits systematically affect the outcomes of our institutions of government. Using cutting edge data science measurement techniques applied to hundreds of thousands of modern legislative speeches, the authors demonstrate that psychological proclivities vary widely across actors, and that these have real effects on behavior. This book will be of interest to anyone who wants to understand how we got to the modern ills of Congressional polarization, deadlock, and dysfunction, why we seem stuck there, and how we might escape.”
— Arthur Spirling, New York University

“Even in an era of resurgent partisanship in government, recent events make clear that the workings of Congress continue to reflect the particular mix of personalities within its ranks. . . . More Than a Feeling provides an ambitious quantitative examination of the relationship between the personality characteristics of members and various aspects of congressional behavior.”
— Congress and the Presidency

"In the end, the reader cannot but agree with the authors when they write in the conclusion that 'personality matters both theoretically and empirically' . . . They provide keen insight into what makes the individual members of Congress tick."
— Perspectives on Politics

Introduction
DOI: 10.7208/chicago/9780226456034.003.0001
[personality;elite behavior;tactics]
This chapter outlines recent puzzles in American politics that cannot be fully explained by extant ideological or institution-driven theories of American politics. Personality is suggested as one possible way by which similar ideological goals may result in completely different political tactics. Extant theories of personality are discussed, and a theory of personality traits and elite behavior is outlined. It is then discussed how this theory can be used to explain legislative behavior. The chapter concludes with capsule previews of the rest of the chapters in the book.

Modeling Individual Differences: Translating Personality Traits into Mathematical Parameters
DOI: 10.7208/chicago/9780226456034.003.0002
[theoretical framework;Big Five;core cognitive constraints;personality;models;parameters;institutions]
This chapter lays out a theoretical framework for incorporating the Big Five personality traits into formal and informal rational choice-based models of political institutions. The historical development of the five factor approach to trait personality, evidence for this approach, and the properties of the five factor structure are discussed. Research on the biological and neurological basis of personality traits are leveraged to identify core cognitive constraints for each of the Big Five rooted in brain functioning. The identified core cognitive constraints are then modeled as parameters that may be broadly and easily used in existing institutional models.

Read My Lips: Measuring Personality Through Legislative Speech
DOI: 10.7208/chicago/9780226456034.003.0003
[automated text analysis;machine learning;personality]
This chapter presents an automated text analysis technique that measures the personality traits of legislators using their speech in the Congressional Record. Crucially, this method, unlike methods for ideologically scaling text, is agnostic as to the substance of speech. By using dictionaries (LIWC and MRCPD) that measure the psycholinguistic properties of words as opposed to words themselves, this machine learning based approach is generally applicable to other settings. So long as the appropriate amount of text is available, the precisely-estimated personality traits of American elites are indeed possible to obtain. This method paves the way for a rich agenda exploring the personality traits of other elites, including presidents, judges, bureaucrats, state legislators, and even non-American institutional settings.

Securing Reelection: Deterrence and Disbursements
DOI: 10.7208/chicago/9780226456034.003.0004
[personality;election;quality challenger;campaign spending]
This chapter examines the influence of personality on the environment incumbent members face during (re)election. The role of incumbent personality in deterring quality challengers from entering the race and in driving the decision to save or transfer campaign funds is emphasized. Results suggest that House members who are more Conscientious and Extraverted, and thus focused on long term rewards from policy, rather than constituency service, are more likely to attract quality challengers. Agreeable members of Congress—who may be more sensitive to the benefits of their copartisans and neglect service—are also more likely to draw a quality challenger. Incumbent personality traits are found to be significantly associated with campaign disbursements as well. Extraverts and Neurotics disburse significantly more funds than less Extroverted and Neurotic peers, due to their sensitivity to gains and negative outcomes from institutional power and policy. More Conscientious members, who place a higher value on having campaign funds available in the future, are less likely to disburse from their campaign committees.

Committee Assignments
DOI: 10.7208/chicago/9780226456034.003.0005
[committees;committee assignments;committee chairs]
This chapter illustrates the importance of legislator personality in the committee and committee chair assignment processes. Results support the previously-uncovered empirical regularities that seniority and observed loyalty matter, but also showcase the importance of innate psychological traits. In particular, empirical results show that Openness, Extraversion, Agreeableness, and Emotional Stability are important predictors of who receives influential committee assignments, and Conscientiousness is an important predictor of who gets named to committee chairmanships. Moreover, the ways in which they do so are consistent with the underlying core cognitive constraint framework.

Proposing and Passing Legislation
DOI: 10.7208/chicago/9780226456034.003.0006
[bill proposals;bill types;legislative effectiveness]
This chapter looks at how personality explains the behavior of members of Congress during the policymaking process, with a focus on how many bills members propose, the types of bills they propose, and how successful they are at passing legislation. All five personality traits explain substantial variation in tactics and effectiveness at various stages in the process, and the ways in which they do so are generally in line with core cognitive constraint framework.

Cooperation, Obstruction, and Party Discipline: Shifting Norms in the U.S. Congress
DOI: 10.7208/chicago/9780226456034.003.0007
[dysfunction;filibuster;cosponsorship]
This chapter uses the Big Five to understand the microfoundations of contemporary Washington dysfunction. Results show more open legislators are more likely to rebel in the House and more agreeable legislators are more likely to filibuster in the Senate. Additionally, personality is shown to have a significant role in whether or not legislators choose to work with members of the other party. The cosponsorship patterns of those who are less open (and therefore more risk-averse) and/or less Emotionally Stable (and therefore more focused on potential negative outcomes) are found to be strongly affected by their electoral security, and the most open members are found to be less affected by changes in their electoral prospects, due to a decreased risk sensitivity and smaller focus on negative outcomes; Extraversion has the opposite effect, with more extraverted members acting more in line with the electoral incentives of their districts. Finally, results suggest more agreeable legislators are more sensitive to the preferences of their constituents and parties when it comes to the decision of whether or not to work with the opposing party.

Media Presence and Home Style
DOI: 10.7208/chicago/9780226456034.003.0008
[home style;technology;press releases]
This chapter examined how personality traits affect the home style of legislators. First, a formal model of technology adoption is presented to explain the linkages between the Big Five and the decision of members to adopt Twitter as a communication tool. Empirically, emotionally Stable and neurotic legislators diverge considerably when it comes to their dependence on favorable signals in making their decision to adopt Twitter. Second, Grimmer's (2013) study of senatorial press releases is re-examined and shows all Big Five traits impact whether legislators choose to credit-claim or position-take. One of the strongest effects found is for agreeableness; increased agreeableness is associated with considerably more credit-claiming amongst senators.

Moving On
DOI: 10.7208/chicago/9780226456034.003.0009
[reelection;retirement;lame duck sessions]
This chapter explores the role of personality in the decision to run for reelection, retire, run for higher office, or (if offered) to accept an appointment to another office, as well as how personality affects the behavior of members in lame duck sessions. Results suggest that the decisions that lead to the end of one's congressional career—as well as those that take place after it is clear the end is nigh—are influenced by personality as well as other contextual factors. Moreover, as with the other dynamics examined in this book, they can be derived from the larger core cognitive constraint framework.

More than a Conclusion: Personality, Politics, and Polarization
DOI: 10.7208/chicago/9780226456034.003.0010
[personality;polarization;elite behavior]
This chapter reviews the major theoretical arguments, methodological approach, and empirical findings of the book. The general empirical support for the hypotheses generated by the theoretical framework for modeling personality is discussed along with the finding that Agreeableness is best modeled as party-directed altruism. Changes in personality and polarization since 1996 are discussed, including the general trends toward decreased agreeableness, conscientiousness, and openness to experience in the U.S. House. The chapter concludes with a discussion of theoretical and empirical next steps in the elite personality in institutions research agenda.