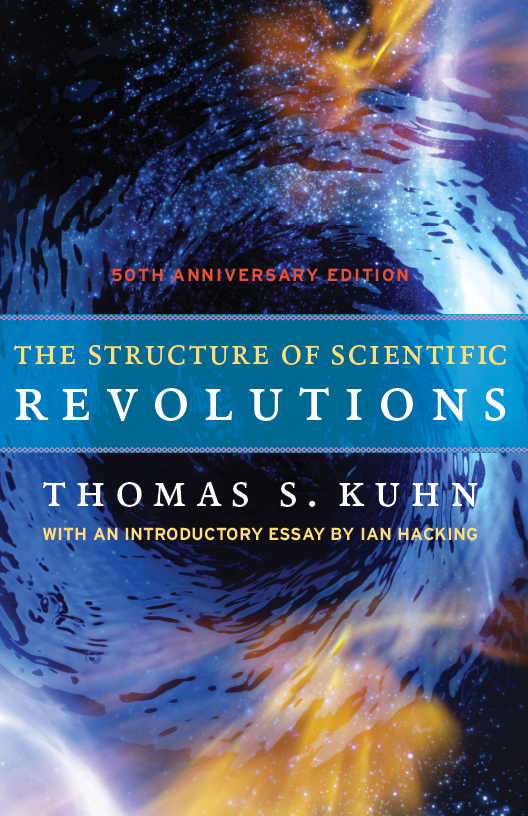 A good book may have the power to change the way we see the world, but a great book actually becomes part of our daily consciousness, pervading our thinking to the point that we take it for granted, and we forget how provocative and challenging its ideas once were—and still are. The Structure of Scientific Revolutions is that kind of book. When it was first published in 1962, it was a landmark event in the history and philosophy of science. Fifty years later, it still has many lessons to teach.

With The Structure of Scientific Revolutions, Kuhn challenged long-standing linear notions of scientific progress, arguing that transformative ideas don’t arise from the day-to-day, gradual process of experimentation and data accumulation but that the revolutions in science, those breakthrough moments that disrupt accepted thinking and offer unanticipated ideas, occur outside of “normal science,” as he called it. Though Kuhn was writing when physics ruled the sciences, his ideas on how scientific revolutions bring order to the anomalies that amass over time in research experiments are still instructive in our biotech age.

This new edition of Kuhn’s essential work in the history of science includes an insightful introduction by Ian Hacking, which clarifies terms popularized by Kuhn, including paradigm and incommensurability, and applies Kuhn’s ideas to the science of today. Usefully keyed to the separate sections of the book, Hacking’s introduction provides important background information as well as a contemporary context.  Newly designed, with an expanded index, this edition will be eagerly welcomed by the next generation of readers seeking to understand the history of our perspectives on science.

Thomas S. Kuhn (1922–96) was the Laurence Rockefeller Professor of linguistics and philosophy at the Massachusetts Institute of Technology. His books include The Essential Tension; Black-Body Theory and the Quantum Discontinuity, 1894–1912; and The Copernican Revolution.

“Like Thomas Kuhn, Ian Hacking has a gift for clear exposition. His introduction provides a helpful guide to some of the thornier philosophical issues. . . . We may still admire Kuhn’s dexterity in broaching challenging ideas with a fascinating mix of examples from psychology, history, philosophy, and beyond. We need hardly agree with each of Kuhn’s propositions to enjoy—and benefit from—this classic book.”

"The Structure of Scientific Revolutions did a gestalt flip on just about every assumption about the who, how, and what of scientific progress. . . . The book still vibrates our culture’s walls like a trumpet call. History of science may not have become exactly what Kuhn thought it should, but The Structure of Scientific Revolutions knocked it off its existing tracks.”
— Chronicle of Higher Education

“So long as there are still paradigms among us, the achievements of Thomas Kuhn will be remembered.”

“One of the most influential books of the 20th century. . . . Singlehandedly changed the way we think about mankind’s most organized attempt to understand the world.”

“The Kuhnian image of science has reshaped our understanding of the scientific enterprise and human inquiry in general. If you haven’t already read The Structure of Scientific Revolutions, the publication of this inexpensive 50th-anniversary edition offers a perfect excuse to do so.”

I. Introduction: A Role for History

II. The Route to Normal Science

III. The Nature of Normal Science

V. The Priority of Paradigms

VI. Anomaly and the Emergence of Scientific Discoveries

VII. Crisis and the Emergence of Scientific Theories

VIII. The Response to Crisis

IX. The Nature and Necessity of Scientific Revolutions

XI. The Invisibility of Revolutions

XII. The Resolution of Revolutions