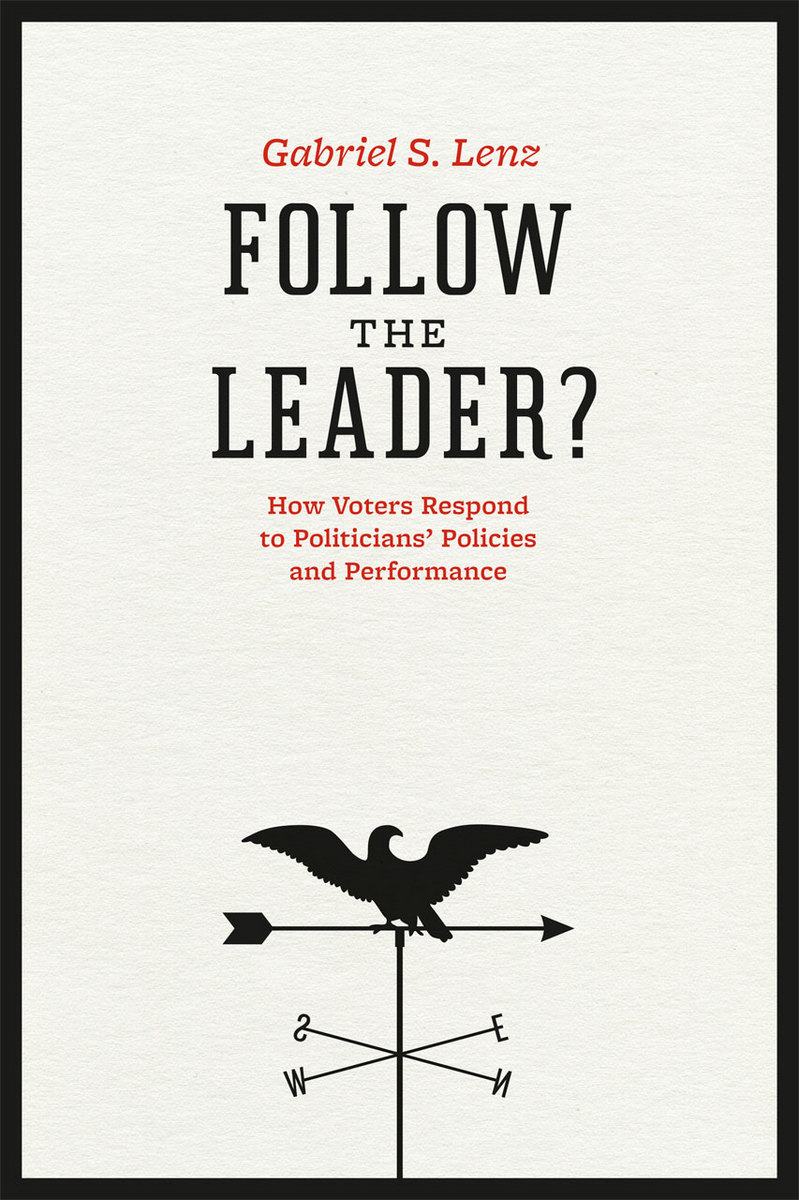 In a democracy, we generally assume that voters know the policies they prefer and elect like-minded officials who are responsible for carrying them out. We also assume that voters consider candidates' competence, honesty, and other performance-related traits. But does this actually happen? Do voters consider candidates’ policy positions when deciding for whom to vote? And how do politicians’ performances in office factor into the voting decision?
In Follow the Leader?, Gabriel S. Lenz sheds light on these central questions of democratic thought. Lenz looks at citizens’ views of candidates both before and after periods of political upheaval, including campaigns, wars, natural disasters, and episodes of economic boom and bust. Noting important shifts in voters’ knowledge and preferences as a result of these events, he finds that, while citizens do assess politicians based on their performance, their policy positions actually matter much less. Even when a policy issue becomes highly prominent, voters rarely shift their votes to the politician whose position best agrees with their own. In fact, Lenz shows, the reverse often takes place: citizens first pick a politician and then adopt that politician’s policy views. In other words, they follow the leader.
Based on data drawn from multiple countries, Follow the Leader? is the most definitive treatment to date of when and why policy and performance matter at the voting booth, and it will break new ground in the debates about democracy.

Gabriel S. Lenz is assistant professor in the Charles and Louise Travers Department of Political Science at the University of California, Berkeley.

“With Follow the Leader? Gabriel S. Lenz addresses the central question of how voters make use of the information around them to form evaluations of elected officials. Examining the impact of processes like priming and position changing, Lenz argues that there are also substantial effects working in the opposite direction—and that who voters support affects their views on the issues. There is much to ponder here for scholars interested in voter behavior and representation.”
— Thomas M. Carsey, University of North Carolina at Chapel Hill

Lucid and engaging, Follow the Leader? revisits the longstanding debate about whether the electorate chooses candidates based on their policy stances. Adducing evidence from a broad array of countries, eras, and issue domains, Gabriel S. Lenz offers a smart and nuanced critique of the ‘issue voting’ literature, arguing that voters often evaluate candidates based on performance but rarely do so based on policy positions. A must-read for anyone interested in public opinion and democratic accountability.

In studying the movement in opinion and behavior, Gabriel S. Lenz brings both good and bad news. The good news is that politicians’ attempts to control the issue agenda in campaigns are not as successful as some of us feared. The bad news is that, instead, citizens mainly—and rather blindly—follow cues from politicians they already prefer. Exploiting existing and underused panel data, Lenz burns through observational equivalence, providing a model not just of clear-eyed analysis but also of patient exposition.

“This is a significant advance in our study of public opinion and voting behavior, offering an important corrective to a number of previous studies and giving us a powerful tool for understanding just how voters reach decisions. Lenz’s book is a valuable and important contribution to the literatures on public opinion, campaigns, voter competency, and democratic theory.”
— Perspectives on Politics