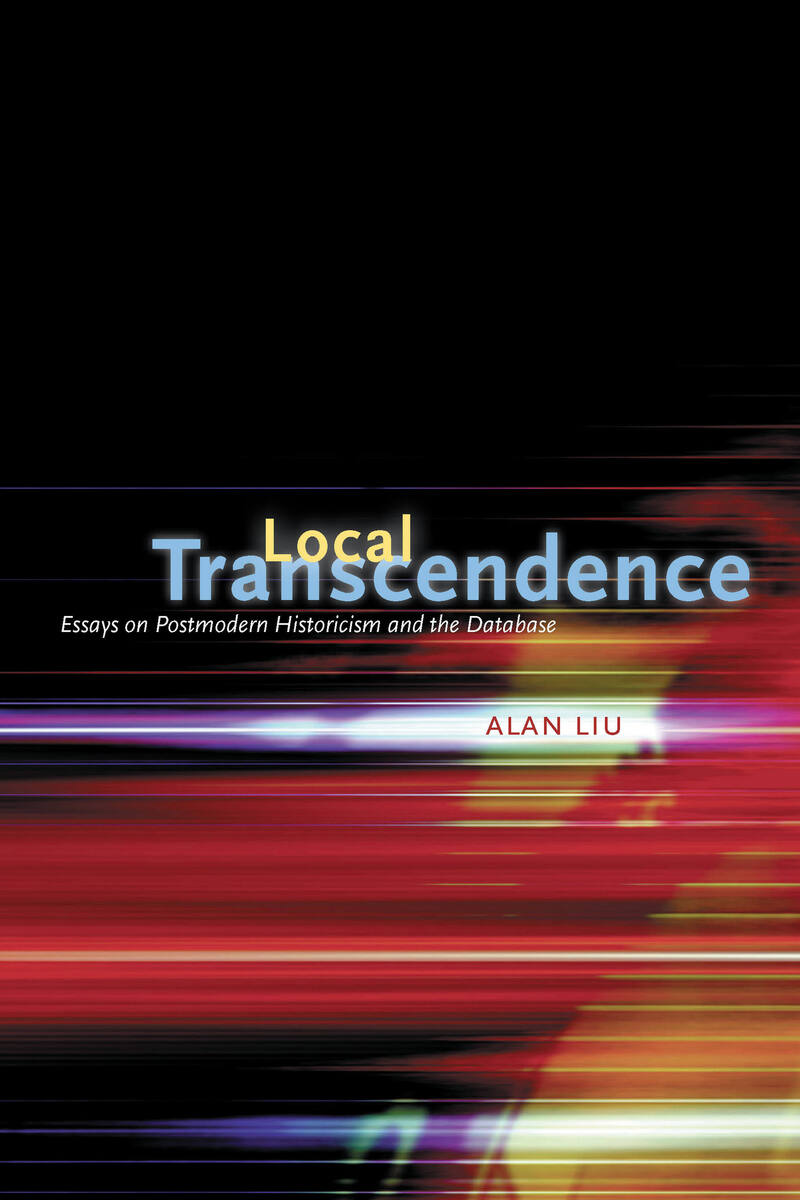 Driven by global economic forces to innovate, today’s society paradoxically looks forward to the future while staring only at the nearest, most local present—the most recent financial quarter, the latest artistic movement, the instant message or blog post at the top of the screen.  Postmodernity is lived, it seems, at the end of history.
In the essays collected in Local Transcendence, Alan Liu takes the pulse of such postmodern historicism by tracking two leading indicators of its acceleration in the late twentieth and early twenty-first centuries: postmodern cultural criticism—including the new historicism, the new cultural history, cultural anthropology, the new pragmatism, and postmodern and postindustrial theory—and digital information technology. What is the relation between the new historicist anecdote and the database field, Liu asks, and can either have a critical function in the age of postmodern historicism? Local Transcendence includes two previously unpublished essays and a synthetic introduction in which Liu traverses from his earlier work on the theory of historicism to his recent studies of information culture to propose a theory of contingent method incorporating a special inflection of history: media history.

“Following the magnificent achievement of The Laws of Cool, Alan Liu in Local Transcendence takes on the problem he astutely identified as deeply connected with the ‘cool’: the loss of historical grounding and consequent restructuring of identities by postindustrial corporations. Offering a rigorous yet humane critique of New Historicism and cultural criticism from the inside, he interrogates the possibilities for historical grounding in the age of information in a witty prose style and a capacious field of reference. Local Transcendence is required reading for anyone interested in the multiple conjunctions, oppositions, and synergies between information, historicism, and cultural context.”

— N. Katherine Hayles, author of My Mother Was a Computer

Introduction: - Alan Liu
DOI: 10.7208/chicago/9780226486970.003.0001
[cultural criticism, historicism, postmodernism, postindustrialism, critical advocacy]
The underlying object of study in this book is historicism—specifically, postmodern historicism—as a pervasive sociocultural condition. Theorists of postmodernism or, on its socioeconomic and political side, postindustrialism, have described this condition in large, systemic terms as, for example, “space- time compression” and the “end of history.” This chapter explores the questions that frame the book. The essays collected in the book were written from 1986 to the present, during a period when the author, like others, was engaged in sustained projects of historicist cultural criticism yet felt the need to reflect on and—from the inside—criticize the methodology of such projects. The best way to characterize these essays is to say that they are an internal critique of the historicist way in contemporary cultural criticism. The nature of such internal critique—or critical advocacy—will emerge from glossing the key concepts in this latter description of the book's topic. (pages 1 - 28)
This chapter is available at:
University Press Scholarship Online

The Power of Formalism - Alan Liu
DOI: 10.7208/chicago/9780226486970.003.0002
[exordium, Philip Sidney, Apology for Poetry, Stephen Greenblatt, Jean E. Howard, cultural law, paradigmatism, digressio, New Historicism]
This chapter considers the version of rhetorical exordium the method uses to place its argument in play. Just as Philip Sidney solicits his audience in the Apology for Poetry, so Stephen Greenblatt and others—to quote Jean E. Howard's early criticism of the technique—broach their argument through “painstaking description of a particular historical event, place, or experience” whose “supposedly paradigmatic moment” sketches “a cultural law.” So thoroughgoing is such paradigmatism that exordium is convertible with digressio: even when a New Historicist study internalizes a paradigm as its centerpiece rather than its opening, the paradigm retains a throwaway quality. The chapter's discussion of why not? of the New Historicism serves primarily to repress the urgency of its real questions about literature and history. The reason the repression is necessary is because the urgency of these questions is not motivated by curiosity about literature and history in the past. (pages 29 - 70)
This chapter is available at:
University Press Scholarship Online

Trying Cultural Criticism - Alan Liu
DOI: 10.7208/chicago/9780226486970.003.0003
[subversion, William Wordsworth, radicalism, 1789 Revolution, revolution manqué, cultural criticism, Representations, dialectical materialism, cultural fallacy]
This chapter offers two concurrent investigations, the first of which is a reexplanation, by means of the subversion/containment analytic, of William Wordsworth's turn from radicalism in the aftermath of the 1789 Revolution. The second is an examination of the revolution manqué expressed in the subversion/containment analytic itself, specifically as spoken by cultural criticism in its American New Historicist or Representations inflection. In an age when absolute knowledge and/or dialectical materialism has become the “interpretation of cultures,” with its exclusive attention to symbol, display, and representation, the dynamics of lordship/bondage is itself bound. It is “décor, gadget culturel” contained within a room of larger interpretive possibilities. The chapter's thesis is this: if there is a cultural fallacy, pace the New Critical biographical fallacy, it lies in the constrictive interpretation of social representations empowered by the notion of the subject. (pages 71 - 108)
This chapter is available at:
University Press Scholarship Online

Local Transcendence - Alan Liu
DOI: 10.7208/chicago/9780226486970.003.0004
[cultural criticism, cultural anthropology, New Cultural History, New Historicism, New Pragmatism, Marxism, French pragmatism, contextualism, detached immanence]
This chapter criticizes cultural criticism in what can be called its high postmodernist forms: cultural anthropology, the New Cultural History, the New Historicism, the New Pragmatism, the new and/or post-Marxism, and, finally, that side of French theory—overlapping with post-Marxism—that may be labeled French pragmatism. These aggressively new forms of contextualism do not exhaust the field of postmodern cultural criticism, and a fuller study would need to include the different emphases of ethnic, gender, and area studies as well as of British cultural materialism. However, for now we can stay high. “High” distinguishes neither the theoretical from the practical, the high cultural from the populist, nor the neoconservative from the leftist. Rather, it indicates a shared mode of cultural engagement that undercuts all such polemics dividing the field to project an increasingly generic discourse of contextualism. This mode of engagement can be called detached immanence. (pages 109 - 138)
This chapter is available at:
University Press Scholarship Online

Remembering the Spruce Goose - Alan Liu
DOI: 10.7208/chicago/9780226486970.003.0005
[cognition, commonplace, historicism, romanticism, postmodernism, popular culture, agora, paragmatics, truth, morality]
Whether we read Jean Baudrillard on Disneyland, Fredric Jameson on the Hotel Bonaventure, Jean-François Lyotard on the “Pacific Wall,” or Paul Virilio on Howard Hughes, we know that southern California—more broadly, the North American Pacific Rim—has become the commonplace of the postmodern world. This chapter examines historicism, postmodernism, and romanticism and considers yet another Pacific Rim commonplace to challenge the very theory of the commonplace that underlies postmodernist thought. The theory is that, at the center of popular culture, there is a commonplace that once functioned as an agora (place of public assembly or marketplace) but that is now dysfunctional—that no longer grounds the truth difference between agora and allegory or between reality and hyperreality, that fractures the universality of ethical standards, that similarly scandalizes the generality of aesthetic criteria, and that at last revokes the very language pragmatics designed to negotiate agreement on (and between) truth, morality, and art claims. In the agora, where people once spoke the mutuality of their cognition and, hence, recognized each other, there remains only something other than total cognition. (pages 139 - 156)
This chapter is available at:
University Press Scholarship Online

The New Historicism and the Work of Mourning - Alan Liu
DOI: 10.7208/chicago/9780226486970.003.0006
[New Historicism, elegy, Sigmund Freud, mourning, melancholia, modernism, postmodernism, Jean-François Lyotard, jubilation, loss]
This chapter argues that the New Historicism is primarily a form of elegy. It explores the lossless assemblage universe—with the aid of Sigmund Freud's “Mourning and Melancholia”—two antithetical, contemporary understandings of that universe. The most basic task of the New Historicism as a work of mourning is simply to verify the possibility of loss in an otherwise closed, lossless, post-historical universe. Modernism is that which expresses nostalgic “melancholia” in its sublime effort to present the “unpresentable,” while postmodernism expresses “jubilation,” Jean-François Lyotard posits, but the modern versus postmodern pairing here is structural rather than diachronic: the two stances coexist in the same condition of postmodernity. Antithetically, if the major key of such maniacs of postmodernity as Lyotard is jubilation, their minor key is clearly and keenly mourning—as in the paradigm of Auschwitz on the first page of Lyotard's The Differend. (pages 157 - 166)
This chapter is available at:
University Press Scholarship Online

Sidney's Technology - Alan Liu
DOI: 10.7208/chicago/9780226486970.003.0008
[literary history, technē, technology, Philip Sidney, Apology for Poetry, Thomas Gray, Progress of Poesy, Percy Bysshe Shelley, Defense of Poetry, Hippolyte Taine]
This chapter, which examines the project of literary history as a technical practice that is part of the broader poetics of contemporary technē, looks at the difference between the technical ethos of past literary history and that of the so-called new literary history. It submits the literary historical practices of the past to a critique by technology—specifically, to critique from the anachronistic perspective of contemporary technology. The materials considered here include only the following works representing certain shared elements of literary-historical explication from the sixteenth century through modernity: Philip Sidney's Apology for Poetry, Thomas Gray's “The Progress of Poesy,” Percy Bysshe Shelley's Defense of Poetry, Hippolyte Taine's History of English Literature, T. S. Eliot's “Tradition and the Individual Talent,” Harold Bloom's Anxiety of Influence, and formalist literary history spanning from the Russian Formalist thesis of “systemic evolution.” (pages 187 - 208)
This chapter is available at:
University Press Scholarship Online

Transcendental Data - Alan Liu
DOI: 10.7208/chicago/9780226486970.003.0009
[knowledge work, humanities, arts, Computers and Humanities, Text Encoding Initiative, text encoding, digital text]
This chapter, which provides a critical analysis of the technological terms of the postindustrial institutions led by knowledge work business, views such techno-logic through the lens of other participating institutions that, while increasingly colonized by postindustrial principles, offer an alternative perspective. The specific institutional perspective it brings to bear is that of the humanities and arts in the academy. Members of the Association for Computers and the Humanities and the Text Encoding Initiative, for example, have long had a hand in developing or adapting text encoding standards, and, in the last decade, major digital text and image archives at East Coast centers of humanities computing in the United States (such as Brown University and the University of Virginia) have proved the sophistication and robustness of text encoding for literature. (pages 209 - 238)
This chapter is available at:
University Press Scholarship Online

Escaping History - Alan Liu
DOI: 10.7208/chicago/9780226486970.003.0010
[New Historicism, database, cultural criticism, Structured Query Language, postmodern historicism, Charles Babbage]
This chapter speculates at once retrospectively and prospectively on the function of the New Historicism in the age of the database. In the New Historicism and other forms of postmodern cultural criticism, history both emerges from the buzzing, blooming swarm of events caught in the great matrix of detail and escapes in the noise of that detail. Similarly, history manifests and sublimes in databases, both emerges in the tables, records, fields, and joins that are the structure of the modern relational database (implemented in SQL, or Structured Query Language) and escapes all such holding structures. Whether in the form of the New Historicism or of a database, contemporary postmodern historicism is an escape structure. The chapter starts with a note recounted by Charles Babbage, goes on to consider the relational database, and concludes by reflecting, once again, on the New Historicism. (pages 239 - 262)
This chapter is available at:
University Press Scholarship Online