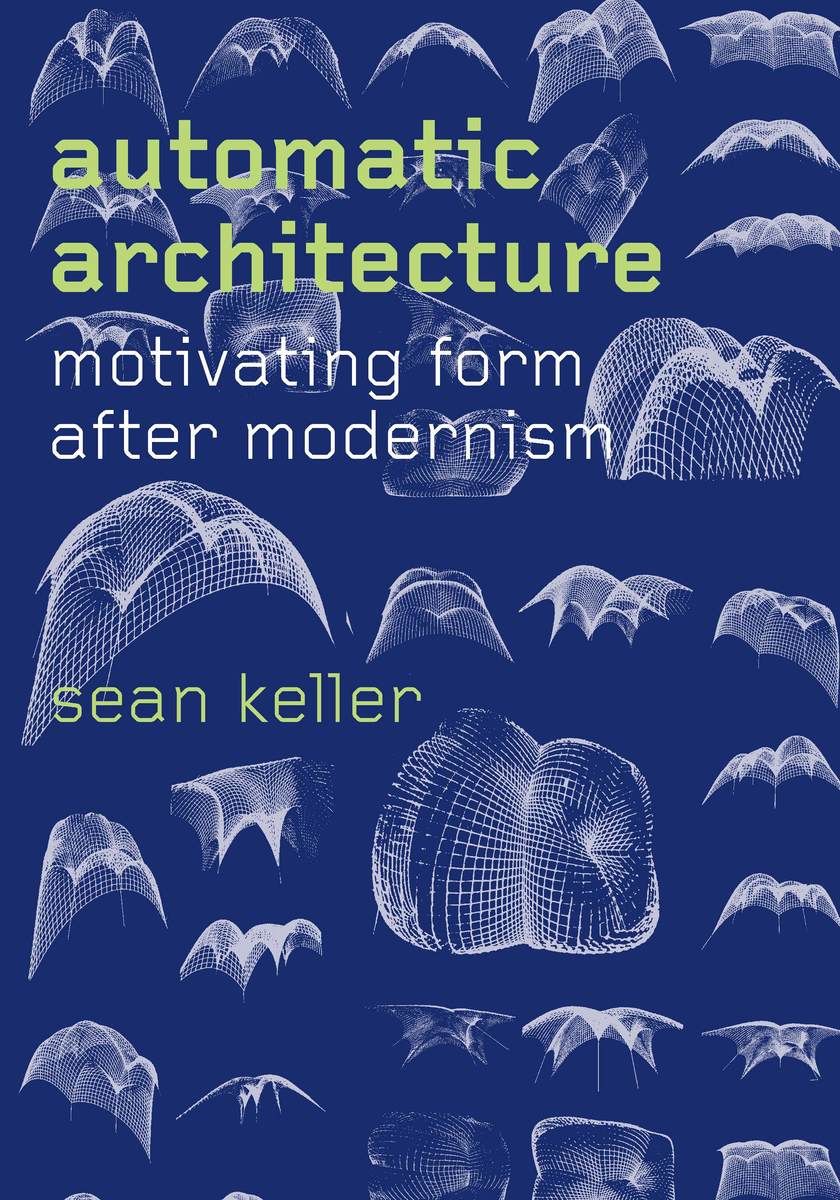 In the 1960s and ’70s, architects, influenced by recent developments in computing and the rise of structuralist and poststructuralist thinking, began to radically rethink how architecture could be created. Though various new approaches gained favor, they had one thing in common: they advocated moving away from the traditional reliance on an individual architect’s knowledge and instincts and toward the use of external tools and processes that were considered objective, logical, or natural. Automatic architecture was born.

The quixotic attempts to formulate such design processes extended modernist principles  and tried to draw architecture closer to mathematics and the sciences. By focusing on design methods, and by examining evidence at a range of scales—from institutions to individual buildings—Automatic Architecture offers an alternative to narratives of this period that have presented postmodernism as a question of style, as the methods and techniques traced here have been more deeply consequential than the many stylistic shifts of the past half century. Sean Keller closes the book with an analysis of the contemporary condition, suggesting future paths for architectural practice that work through, but also beyond, the merely automatic.

Sean Keller is associate professor and director of history and theory at the IIT College of Architecture. He is a trustee of the Graham Foundation and a fellow at the Neubauer Collegium at the University of Chicago.

“Automatic Architecture is an original, engaging historical account of several canonical figures in postwar architecture—including Frei Otto, Christopher Alexander, and Peter Eisenman—here linked together by the idea of the automatic: design emptied of subjectivity, intuition, and choice.  Simultaneously, the book addresses contemporary architecture's fixation on computational design, raising readers' self-awareness of today's foundations and limits.  With important things to say about both mid-twentieth-century architecture and our present moment, Automatic Architecture is smart, readable, and relevant.”
— Daniel M. Abramson, Boston University

“Keller’s work provides a much-needed historical backdrop against which much of today’s interest in algorithmic, parametric, computer-aided architectural design can be understood more deeply. For the first time, Automatic Architecture offers a synthetic account of systems-oriented ‘design methods’ and other approaches to designing the ‘process’ of architectural design. Importantly, for Keller, this converges with a crisis of authorship that threatened the foundations of architectural modernism, especially in its ‘heroic’ variants. This book will be of interest both to scholars of modernism and postmodernism, and to architects, teachers of architecture, and students concerned with the ongoing debates regarding digitally-guided design processes.”
— Reinhold Martin, Columbia University

“What is most original about Automatic Architecture is that Sean Keller has called attention to a moment in the history of architecture that was paramount for subsequent developments but that, until this book and some of Keller’s own earlier work, could be said to have been hiding in plain sight. The key figures—Christopher Alexander, Lionel March, Peter Eisenman, and Frei Otto—had vastly different careers, incommensurate bodies of work, and have been viewed differently by historians over the years. Regardless, this book shows that, taken as a whole, their work was the ground from which sprang decades of experimentation and dozens of practices, and continues to have far-reaching influence today on our attitudes regarding architectural form and the nature of design.”
— Sandy Isenstadt, University of Delaware

Introduction: Into the Automatic - Sean Keller
DOI: 10.7208/chicago/9780226496528.003.0001
[authorship;Reyner Banham;Alan Colquhoun;computing;Colin Rowe]
This chapter frames the general conceptual and historical context of the book. The broadest question explored is: how is architectural authorship justified? More specifically, the book examines ways in which architects and theorists responded to this question in the period after the Second World War. This chapter outlines the relationship of architecture and science after 1945, especially as established through the new technology of electronic computing. It discusses the views of major architectural theorists such as Reyner Banham, Colin Rowe, and Alan Colquhoun. The chapter also considers the connections of the postwar context to strands of prewar modernism. (pages 1 - 16)
This chapter is available at:
University Press Scholarship Online

1/ Fenland Tech: Design Methods at Cambridge - Sean Keller
DOI: 10.7208/chicago/9780226496528.003.0002
[Christopher Alexander;Lionel March;Centre for Land Use and Built Form Study;Cambridge University;design methods;constructivism]
This chapter discusses the “design methods” research initiated by Christopher Alexander and pursued with more intellectual rigor by Lionel March at Cambridge University’s Centre for Land Use and Built Form Study. Alexander, March, and their colleagues attempted to apply mathematics and computation to the analysis of architectural problems in the hope of formulating a scientific method of design that could proceed (semi-) automatically from data—needs, costs, site conditions, material properties—to design. For March this explicitly meant reframing Constructivist goals and methods within the newly available context of electronic computation. Importantly however, over the course of a decade or so, the role of this new context shifted for March from one of direct scientistic calculation to one in which computation provided a new working space for the collective development and assessment of design. (pages 17 - 62)
This chapter is available at:
University Press Scholarship Online

2/ The Logic of Form: Peter Eisenman’s Early Work - Sean Keller
DOI: 10.7208/chicago/9780226496528.003.0003
[Peter Eisenman;conceptual art;neo-platonic]
The chapter examines the early work of architect and theorist Peter Eisenman who, though adamantly opposed to the design methods approach of figures such as Alexander, also attempted to develop a rigorous, quasi-autonomous system of architectural form generation during the same years. In contrast to the data-driven approach of the design methods movement, Eisenman posited a neo-Platonic logic of form, with ties to the contemporaneous work of the linguist Noam Chomsky and to Conceptual and Minimal art. This chapter gives a detailed, and non-instrumental, accounting of Eisenman’s early thought within a wider context, in order to more closely articulate the similarities and differences between his work and other, parallel, intellectual projects. (pages 63 - 98)
This chapter is available at:
University Press Scholarship Online

3/ The Politics of Form Finding: Frei Otto and Postwar German Architecture - Sean Keller
DOI: 10.7208/chicago/9780226496528.003.0004
[Frei Otto;Expo 67;Multihalle;form finding]
This chapter explores the German Frei Otto’s research into form finding and natural models for design, with a particular focus on the West German Pavilion for Expo 67 in Montreal and the 1975 Multihalle in Mannheim, both projects in which Otto played a leading role. Otto's work was based on the premise that, in parallel to nature, architectural forms could be shaped as optimal responses to their physical environments. Confronting the challenges of postwar Germany, Otto gave an explicitly political valence to this naturalistic methodology, describing it as both anti-Fascist and proto-environmental. (pages 99 - 146)
This chapter is available at:
University Press Scholarship Online

Conclusion: From Automatic Architecture to Architectural Automatisms - Sean Keller
DOI: 10.7208/chicago/9780226496528.003.0005
[automatism;Stanley Cavell;computation]
This chapter expands our understanding of the automatic, and the role it plays both in these historical cases and in contemporary architecture, by re-examining it through Stanley Cavell’s concept of “automatism.” What Cavell suggests is that, although some form of the automatic is inherent to postwar artistic practices, these practices must also move beyond the merely automatic—which is empty of meaning—and into the conscious deployment of the automatic as a technique within the realms of cultural production. As such, his interpretation of the postwar condition sheds light both on the historical cases gathered here and on their various extensions in contemporary architectural practice, for which computation has made confrontation with the automatic inescapable. A shift in tone and timeframe marks this chapter. This is by design. My aim is to pull back from the historical cases of the 1960s and 1970s to address the conceptual terrain these cases share with the influential role of computation in contemporary architecture. This is certainly not intended to naively instrumentalize the historical analysis, but rather to unfold an alternative notion of the automatic by which both the historical cases and present day computational practice can be read. (pages 147 - 160)
This chapter is available at:
University Press Scholarship Online