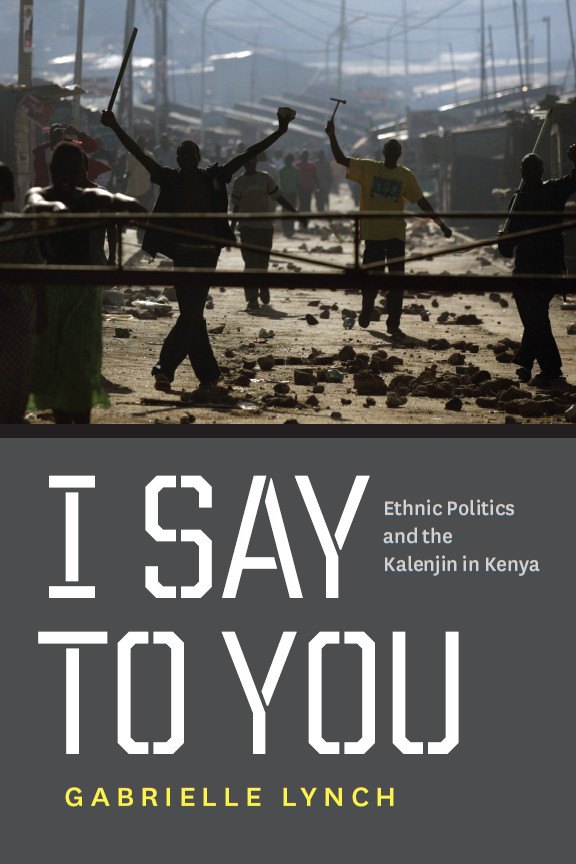 In 2007 a disputed election in Kenya erupted into a two-month political crisis that led to the deaths of more than a thousand people and the displacement of almost seven hundred thousand. Much of the violence fell along ethnic lines, the principal perpetrators of which were the Kalenjin, who lashed out at other communities in the Rift Valley. What makes this episode remarkable compared to many other instances of ethnic violence is that the Kalenjin community is a recent construct: the group has only existed since the mid-twentieth century. Drawing on rich archival research and vivid oral testimony, I Say to You is a timely analysis of the creation, development, political relevance, and popular appeal of the Kalenjin identity as well as its violent potential.
Uncovering the Kalenjin’s roots, Gabrielle Lynch examines the ways in which ethnic groups are socially constructed and renegotiated over time. She demonstrates how historical narratives of collective achievement, migration, injustice, and persecution constantly evolve. As a consequence, ethnic identities help politicians mobilize support and help ordinary people lay claim to space, power, and wealth. This kind of ethnic politics, Lynch reveals, encourages a sense of ethnic difference and competition, which can spiral into violent confrontation and retribution.

Gabrielle Lynch is a senior lecturer in Africa and the politics of development at the School of Politics and International Studies at the University of Leeds.

“How did the Kalenjin, an ethnic group that did not exist before the 1940s, come to dominate Kenya in the 1980s? It is a remarkable story, and Gabrielle Lynch tells it well. The social imagination of ethnic community is one of modern African history’s most contested themes. Lynch shows how much it depended on a rumination on past history, but she also appreciates the importance of creative political intrigue. Her combination of the two makes for a thought-provoking read.”

“This is an indispensable guide to understanding the distinctive place of Kalenjin nationalism in Kenyan politics and the recent post-election violence as well as the role of ethnicity in Africa more broadly. I Say to You traces the work of indigenous intellectuals and independence-era political leaders in shaping a larger sense of collective kinship among people sharing a broadly similar language and culture, though often with sharply diverging senses of connection. Lynch is superb in explaining both the persistent dissension within the Kalenjin as well as the way unity was achieved in the context of the ethnic logic of Kenyan politics, the dynamics of which she has exceptional insight into.”

“I Say to You is a richly detailed and insightful analysis of the dynamic and open-ended process of ethnic construction and politicization that focuses on one of the most recent and important ethnic communities to emerge in Kenya in modern times. Lynch’s adept weaving of political, cultural, and economic factors in a compelling historical analysis of the Kalenjin and their position in Kenya’s contentious ethnic politics has much wider theoretical and methodological importance for understanding the process of ethnic politicization in not only the rest of Africa, but also in other non-Western societies subject to the double historical wallops of colonialism and globalization.”

“In this fascinating book, Lynch offers a strikingly new interpretation of Kalenjin politics over the past seventy years. This is a full, rich book, brimming over with the personalities and intrigues typical of Kenya’s high-stakes, soap operatic, political world. Lynch disabuses us of most of what we thought we knew about the Kalenjin….By moving away from seeing ethnic politics strictly through the lens of patrimonialism, Lynch makes her subjects more human—influenced by many factors, not all of them rational, and, like us all, flawed….This book must be read anyone with an interest in Kenya, African politics, ethnic politics, and political violence.”
— Brett Shadle, International Journal of African Historical Studies

“Lynch has written an important book that anthropologists and other social scientists who work in Kenya, or with interests in the politics of ethnicity or autochthony, will greatly appreciate.”
— Peter D. Little, American Anthropologist

Introduction / The Nature and Political Salience of Ethnic Identity

One / Creating a Community: From Nandi Speakers to Kalenjin

Two / Popularizing the Kalenjin: Decolonization and the First Majimbo Debate

Three / Moi: The Making of an African “Big Man”

Four / Harambee to Nyayo: Control and Patronage in the President’s Backyard