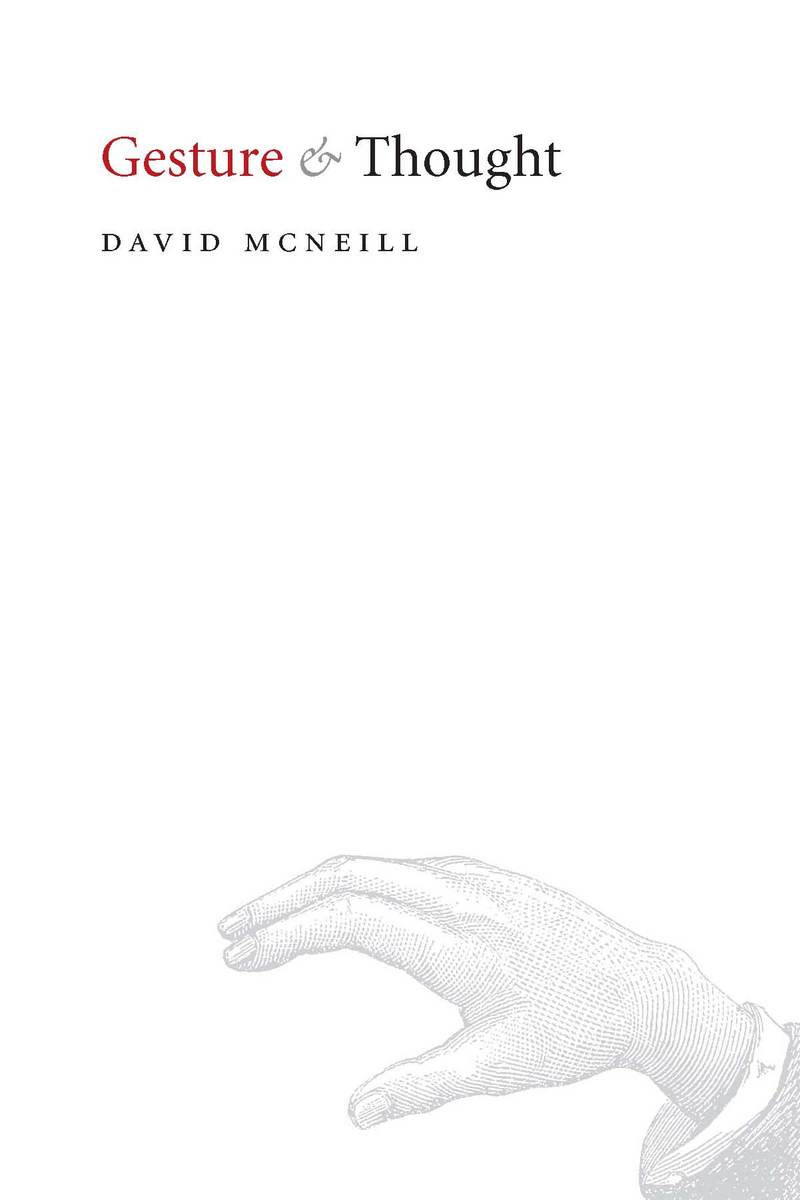 Gesturing is such an integral yet unconscious part of communication that we are mostly oblivious to it. But if you observe anyone in conversation, you are likely to see his or her fingers, hands, and arms in some form of spontaneous motion. Why? David McNeill, a pioneer in the ongoing study of the relationship between gesture and language, set about answering this question over twenty-five years ago. In Gesture and Thought he brings together years of this research, arguing that gesturing, an act which has been popularly understood as an accessory to speech, is actually a dialectical component of language.
Gesture and Thought expands on McNeill’s acclaimed classic Hand and Mind. While that earlier work demonstrated what gestures reveal about thought, here gestures are shown to be active participants in both speaking and thinking. Expanding on an approach introduced by Lev Vygotsky in the 1930s, McNeill posits that gestures are key ingredients in an “imagery-language dialectic” that fuels both speech and thought. Gestures are both the “imagery” and components of “language.” The smallest element of this dialectic is the “growth point,” a snapshot of an utterance at its beginning psychological stage. Utilizing several innovative experiments he created and administered with subjects spanning several different age, gender, and language groups, McNeill shows how growth points organize themselves into utterances and extend to discourse at the moment of speaking.
An ambitious project in the ongoing study of the relationship of human communication and thought, Gesture and Thought is a work of such consequence that it will influence all subsequent theory on the subject.

“With Gesture and Thought, David McNeill again demonstrates his status as a pioneer in the field of cognitive psychology and linguistics. Here he has developed a new theory of language and gesture in which gesture is seen as integral to language. In doing so, he has not merely grafted gesture onto language, but has reexamined and redefined our understanding of language, thought, and gesture. Gesture and Thought is a book of profound importance, destined to change the way we think about human language, gesture, and thought.”

“Expanding the field he helped create more than twenty years ago, David McNeill gives us, in Gesture and Thought, a deep and insightful account of how the mind is intrinsically embodied. Gestures—pervasive and dramatically ignored—are in themselves thoughts. If you still think that human minds can be emulated or even surpassed by computers, read this book! A must for anybody interested in language, thought, and the elusive intricacies of the mind-body problem.”--Rafael Núñez, University of California, San Diego

“In this eagerly awaited book, David McNeill presents a unified theory of language, speech, gesture, and thought. Until this book, no one had ever attempted to formulate a theoretical framework to explain why gesture and speech appear so tightly linked, nor had anyone considered how an integration of gesture and speech might affect linguistic theory. Here, McNeill challenges traditional concepts in psychology and linguistics by arguing for the integration of body and mind and of dynamic and static aspects of language and thought—as opposed to separating them. This is a radically innovative work that will become a classic in psychology, cognitive science, linguistics, and anthropology. After having read it nobody will ever be able to think that the body and the mind are separate things again.”--Cornelia Müller, Free University of Berlin

"By defending his reasons for studying gesture, offering a wide range of evidence to support conclusions about the imagery-language dialect, and illustrating how language is inextricably connected to social contexts, McNeill helps readers see why many scholars are no longer interested in parsing out the effects of nature and nurture on human functioning."
— Theresa A. Thorkildsen, PsycCritiques

"I am unable to adequately convey in words, or gesture, my admiration for this book, and generally believe that Gesture & Thought offers a major advancement in gesture studies with broad theoretical implications for comprehensive theories of embodied cognition and communication. . . . This is not just a book for gesture scholars, but one that all cognitive scientists would greatly benefit from reading. . . . A great example of interdisciplinary scholarship at its best, and [it] will undoubtedly stand the test of time as a classic in the study of human minds and communication."
— Raymond W. Gibbs, Jr., Gesture

"The significance of this work cannot be overestimated. Gesture and Thought is McNeill's capstone work because it represents a synthesis of his highly regarded and outstanding research in gesture during the past quarter century. This volume needs to be an essential part of the library of anyone who wishes to know about the relationship of gesture, language, and thought."
— Frank Nuessel, Semoitica

8. The Thought-Language-Hand Link and Language Origins