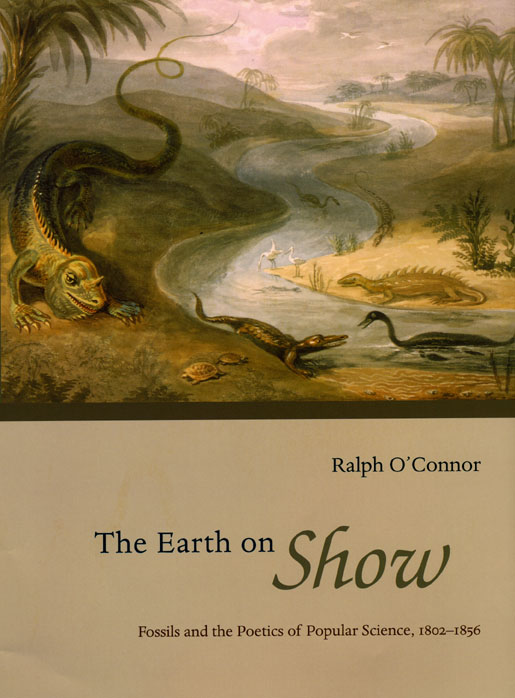 At the turn of the nineteenth century, geology—and its claims that the earth had a long and colorful prehuman history—was widely dismissedasdangerous nonsense. But just fifty years later, it was the most celebrated of Victorian sciences. Ralph O’Connor tracks the astonishing growth of geology’s prestige in Britain, exploring how a new geohistory far more alluring than the standard six days of Creation was assembled and sold to the wider Bible-reading public.

Shrewd science-writers, O’Connor shows, marketed spectacular visions of past worlds, piquing the public imagination with glimpses of man-eating mammoths, talking dinosaurs, and sea-dragons spawned by Satan himself. These authors—including men of science, women, clergymen, biblical literalists, hack writers, blackmailers, and prophets—borrowed freely from the Bible, modern poetry, and the urban entertainment industry, creating new forms of literature in order to transport their readers into a vanished and alien past.

In exploring the use of poetry and spectacle in the promotion of popular science, O’Connor proves that geology’s success owed much to the literary techniques of its authors. An innovative blend of the history of science, literary criticism, book history, and visual culture, The Earth on Show rethinks the relationship between science and literature in the nineteenth century.

Ralph O’Connor is professor in the literature and culture of Britain, Ireland, and Iceland at the University of Aberdeen.

“A brilliant and highly readable book examining the complex relationships between fact and fantasy, science and the imagination, characteristic of the accounts of the Earth’s prehistory that proliferated during the Romantic period. O’Connor’s research has been wide-ranging and innovative. He writes with wit and verve, and the story he has to tell is enthralling.”

“This is a richly evocative (and often entertaining) account of the ways in which the astonishing earth-history reconstructed by the new science of geology was first made accessible and palatable to the British public, or at least to its more affluent strata, during geology’s first golden age. Here at last is an analysis of popular science that takes seriously the sheer diversity of genres—prosaic, poetic, and pictorial—that facilitated this decisive cultural transposition, as a result of which we all now ‘walk with dinosaurs.’ Far from contrasting ‘science’ with ‘literature,’ O’Connor rightly treats the science as literature, and he describes not only the work of self-defined popularizers but also, revealingly, that of such geological heavyweights as Buckland and Lyell. In its innovative analytical framework, the impressive range of its sources, and not least its attractive readability, this book sets new standards for literary studies of the sciences.”
— Martin J. S. Rudwick, Research Associate, Department of History and Philosophy of Science, University of Cambridge and Professor Emeritus of History at the University of California, San Diego

“O’Connor brilliantly applies techniques of literary and visual exegesis to the heterogeneous body of early-nineteenth-century writings and images of antediluvian worlds and extinct monsters. The book successfully breaks out of the ‘two cultures’ divide by attending to the poetics of geological texts and rethinking some of the meanings of popular culture in the period. It is written with fluency, intelligence and wit and is based on an impressive body of primary research. A must for students of Romantic and Victorian literature and culture as well as historians of science.”

“In this important, well-illustrated, and enjoyable book,  O’Connor takes us on a fascinating tour of the verdant mental landscape of the early nineteenth century, inhabited by strange and remarkable creatures, some well known, such as William Buckland and Charles Lyell, and others hitherto unjustly neglected, such as Hugh Miller. O’Connor’s fresh critical appraisal shows their profound impact on later Victorians from Darwin to Tennyson, right through to the modern day. And as we watch the primal chaos wherein geology, religion, and literature met and fused to create Victorian culture, we come to realize the inadequacy of treating each discipline in isolation.”

"The portrayal of the geological past to a public hungry for drama and instruction is explored with great verve by O'Connor. . . . One could argue that the awareness of deep time has changed human perception of our place in the cosmos more than any other discovery. Anyone interested in how such new ideas are promulgated at large will enjoy Ralph O'Connor's work."
— Richard A. Fortey, Times Literary Supplement

"This book is utterly brilliant. . . . [It] is readable, fun and, despite its immense size . . . it is a page-turner. . . . The Earth on Show restores a sense of enthusiasm and excoitement for new knowledge."
— Sharon Ruston, Byron Journal

"Undoubtedly a tour-de-force and an outstanding success."
— David Oldroyd, Nuncius

PART I BUILDING THE STORY

9 Scenes and Legends from Deep Time

10 Hugh Miller and the Geologic Diorama

Appendix: Currencies, and Sizes of Books