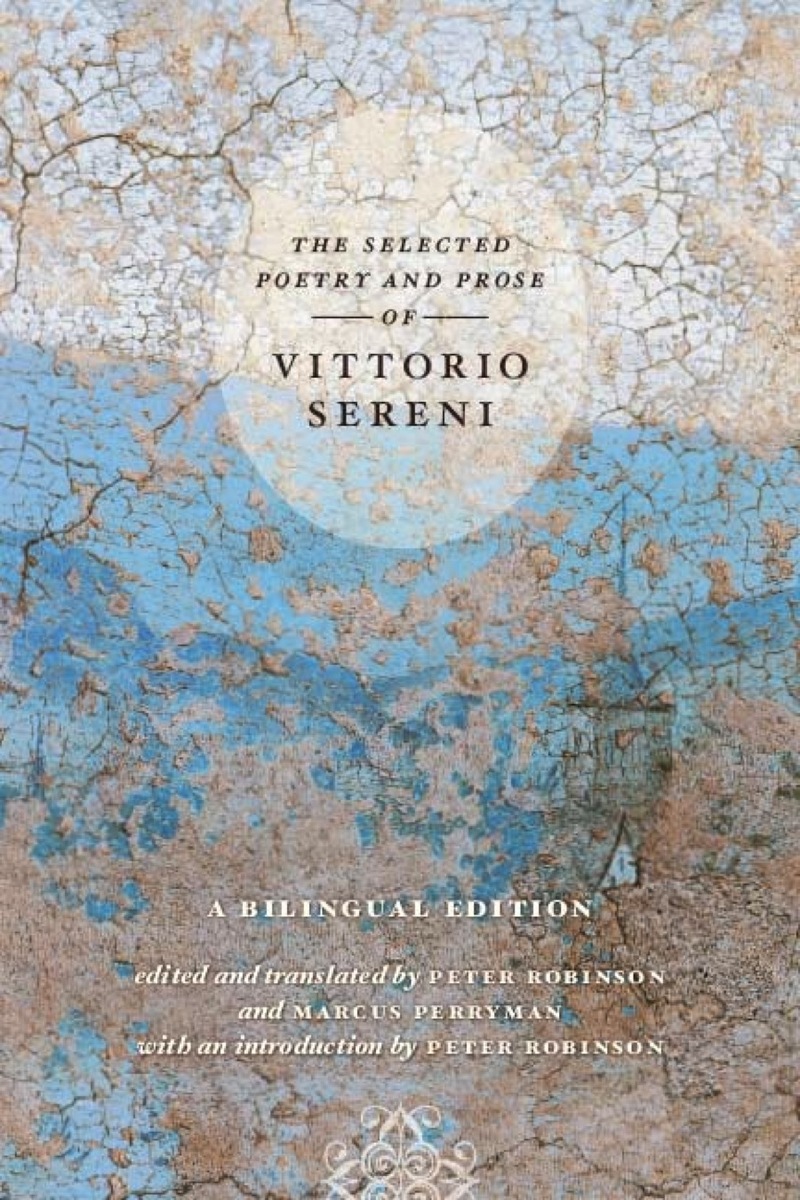 One of the most important Italian poets of the last century, Vittorio Sereni (1913–83) wrote with a historical awareness unlike that of any of his contemporaries. A poet of both personal and political responsibility, his work sensitively explores life   under fascism, military defeat and imprisonment, and the resurgence of extreme right-wing politics, as well as the roles played by love and friendship in the survival of humanity.
The first substantial translation of Sereni’s oeuvre published anywhere in the world, The Selected Poetry and Prose of Vittorio Sereni is a unique guide to this twentieth-century poet. A bilingual edition, reissued in paperback for the poet’s centenary, it collects Sereni’s poems, criticism, and short fiction with a full chronology, commentary, bibliography, and learned introduction by British poet and scholar Peter Robinson.

Peter Robinson is Head of Department and Professor of English and American Literature at the University of Reading, UK. Marcus Perryman is the author and translator of The Journey of G. Mastorna. The film Fellini didn't make and translator of Orson Welles in Italy by Alberto Anile, both forthcoming.

"For the first time in English, we have an authorised translation which gives due consideration to his corpus, selecting from among his four collections the most representative poems and from his prose those pieces which extend the poetry's themes and concerns. Together, they present a complex portrait, reflective of the poet's search for a way of being in the world, a mode of existence and of writing which would be an appropriate response to the weight of a personal experience intertwined with that of his country and Europe in the twentieth century. "—Maria-Daniella Dick, PN Review
— Maria-Daniella Dick,, PN Review

"Many excellent Italian poets of the 20th century are less well known to English-speaking readers than they should be, and Sereni has long been one of the most egregious cases of undeserved neglect. This beautifully produced bilingual edition of his poems and prose should do much to correct this long standing critical oversight. Robinson and Perryman are experienced translators of Italian poetry, and they worked closely with Sereni and his heirs over many years to produce renderings of his work that do justice to its emotional subtlety and finely discriminated linguistic coloration....A sensitive introduction by Robinson (himself a poet), a chronology of Sereni's life, thorough annotation of texts, and a comprehensive bibliography complete the volume, which will be a boon to those interested in Italian and comparative literature and modern poetry. Highly recommended."
— Choice

"Translations of [Sereni] have tended to be sporadic and difficult to come by. The University of Chicago Press has now produced lavish hardback anthologies...with generous portions, in English and Italian, of all of the many collections of verse, plus (in English only) selections from their prose writings.... Sereni deserve[s] to be much better known outside Italy...the translations are always serviceable and at times of high quality."
— Peter Hainsworth, Times Literary Supplement

"[Sereni] is an extraordinary evoker of both on-the-spot experience and the enduring presence of the past in memory. His stature as a major European war poet should grow rapidly with this volume. . . . Perryman and Robinson translate closely and accurately, and this monumental bilingual edition will be invaluable to students of Sereni."
— John Taylor, Yale Review

See how the voices fall

Appointment at an unusual hour

from The Immediate Surroundings

Index of titles and first lines