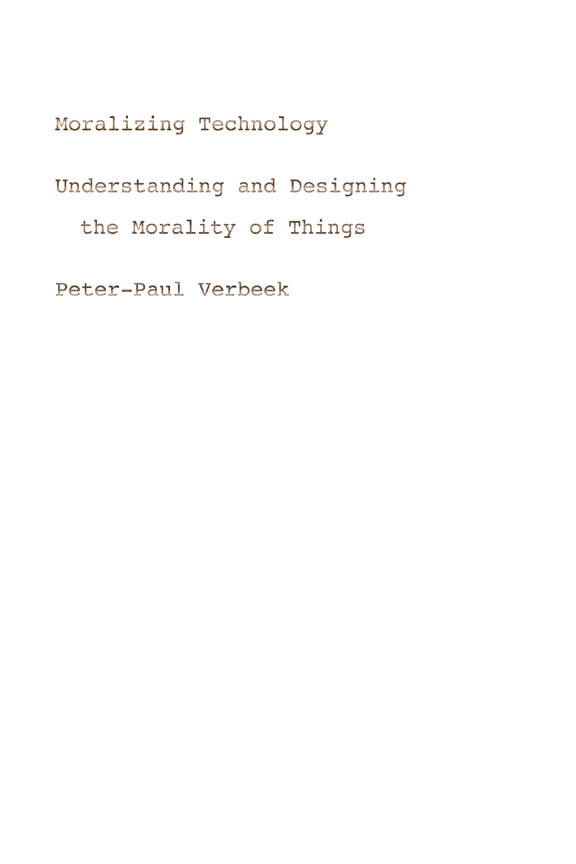 Technology permeates nearly every aspect of our daily lives. Cars enable us to travel long distances, mobile phones help us to communicate, and medical devices make it possible to detect and cure diseases. But these aids to existence are not simply neutral instruments: they give shape to what we do and how we experience the world. And because technology plays such an active role in shaping our daily actions and decisions, it is crucial, Peter-Paul Verbeek argues, that we consider the moral dimension of technology.
Moralizing Technology offers exactly that: an in-depth study of the ethical dilemmas and moral issues surrounding the interaction of humans and technology. Drawing from Heidegger and Foucault, as well as from philosophers of technology such as Don Ihde and Bruno Latour, Peter-Paul Verbeek locates morality not just in the human users of technology but in the interaction between us and our machines. Verbeek cites concrete examples, including some from his own life, and compellingly argues for the morality of things. Rich and multifaceted, and sure to be controversial, Moralizing Technology will force us all to consider the virtue of new inventions and to rethink the rightness of the products we use every day.

Peter-Paul Verbeek is professor of philosophy of technology at the University of Twente, the Netherlands, extraordinary professor (Socrates chair) of philosophy of human enhancement at Delft University of Technology, and chairman of the Young Academy, a division of the Royal Dutch Academy of Arts and Sciences. He is the author of What Things Do: Philosophical Reflections on Technology, Agency, and Design.

“We can no longer extricate our moralities from our technologies. Even to try to do so—as when we refuse to allow genetically modified foods into our diet or to become mobile phone users—is to become morally engaged with moralizing artifacts. Technologies come on the scene not as neutral tools but as elements in a self- and co-constructing network that always emerges from and has implications for our understandings of the good. Peter-Paul Verbeek’s insightful analysis invites us to attend more carefully to the ways we practice our moralities, not only with other people and nature but also among and through the artifacts that have become our children, siblings, parents, aunts, uncles, and cousins, with all the love-hate relationships typical of family life.”
— Carl Mitcham, Colorado School of Mines

“At the turn of the twenty-first century, readers in the philosophy of technology noted an ‘empirical turn’ on the part of the leading philosophers of technology. Peter-Paul Verbeek goes further and, while examining the active role of technologies in human-world shaping, adds an ethical turn—do artifacts have moralities? His surprising affirmative answer makes this book an intellectually challenging read.”—Don Ihde, Stony Brook University

“Verbeek’s commendable book charts a middle ground between technophobia and techno-utopianism, and he makes a strong case for the need to view our technologies as active agents rather than neutral tools in our lives.”
— Christine Rosen, New Republic

“This book is one of the leading works in ethics of technology that combines the empirical turn and the ethical turn in philosophy of technology, and so, it has the potential to generate interesting discussions in the field. . . . I highly recommend this book as a useful addition to the literature on the ethics and philosophy of technology and especially on understanding the intricate relations between morality and technology.”
— Sadjad Soltanzadeh, NanoEthics

“Peter-Paul Verbeek has developed a novel approach to the ethics of technology in Moralizing Technology.”
— Adam Briggle, University of North Texas, Techné

Mediated Morality - Peter-Paul Verbeek
DOI: 10.7208/chicago/9780226852904.003.0001
[technologically mediated character, ethical implications, moral terms, ethics, technological culture, morally charged]
This chapter discusses the technologically mediated character of our daily lives and its important ethical implications. First of all, the quality of technology's contributions to our existence can be assessed in moral terms. Some roles played by technology can be referred to as “good” and other roles “bad”—even if it is not possible to lay the blame on technologies for them. Second, by helping to shape human actions and experiences, technologies also participate in our ways of doing ethics. Ethics is concerned with the questions of “how to act” and “how to live”—and in our technological culture, these questions are not answered exclusively by human beings. Technologies also provide answers to the central ethical questions, albeit in a material way. Artifacts are morally charged; they mediate moral decisions, shape moral subjects, and play an important role in moral agency. (pages x - 20)
This chapter is available at:
University Press Scholarship Online

A Nonhumanist Ethics of Technology - Peter-Paul Verbeek
DOI: 10.7208/chicago/9780226852904.003.0002
[humanist character, Sloterdijk, Letter on Humanism, contemporary ethics, modernist ontology, nonhuman reality, posthumanist position, fascism, amodern approach]
This chapter can be interpreted as a reply to Sloterdijk's “response to the Letter on Humanism.” It first investigates the humanist character of contemporary ethics and its supporting modernist ontology. Second, the moral relevance of nonhuman reality is elaborated through a discussion of the mediating role of technology in moral practices and decisions. What follows is a critical engagement with Sloterdijk's “posthumanist” position. The chapter aims to dispel all associations with fascism from this chapter's approach, while using a critique of humanism as a basis for an amodern approach to ethics that does justice to nonhuman forms of morality and the ways humans have to deal with them. (pages 21 - 40)
This chapter is available at:
University Press Scholarship Online

Do Artifacts Have Morality? - Peter-Paul Verbeek
DOI: 10.7208/chicago/9780226852904.003.0003
[moral role, ethical theory, moral agent, intentionality, freedom, amodern approach, technological artifacts, moral actions]
This chapter focuses on the question of how to account for the moral role of technology in ethical theory. Qualifying as a moral agent requires at least the possession of intentionality and some degree of freedom. With respect to artifacts, it is argued here that both requirements are problematic. Utilizing the amodern approach, the concept of agency—including its aspects of intentionality and freedom—can be reinterpreted in a direction that makes it possible to investigate the moral relevance of technological artifacts in ethical theory. This chapter first discusses the most prominent existing accounts of the moral significance of technological artifacts. Later sections then develop a new account in which the chapter expands the concept of moral agency in such a way that it can do justice to the active role of technologies in moral actions and decisions. (pages 41 - 65)
This chapter is available at:
University Press Scholarship Online

Technology and the Moral Subject - Peter-Paul Verbeek
DOI: 10.7208/chicago/9780226852904.003.0004
[technologically mediated, moral subject, Michel Foucault, human intentions, structures of power, heteronomous]
This chapter studies and discusses the works of Michel Foucault, especially his oeuvre that precisely embodies the tension that needs to be dealt with if one is to understand the technologically mediated moral subject. Foucault's early work focuses on the forces and structures that determine the subject or that produce specific subjects. Human intentions are not “authentic” but result from structures of power that can also be present materially; instead of being autonomous, human beings are heteronomous. The later Foucault, however, addressed the ways in which human beings can find a relation toward structures of power. In this perspective, he does not revoke his earlier analyses but investigates how, amid these structures of power, human beings can constitute themselves as moral subjects. (pages 66 - 89)
This chapter is available at:
University Press Scholarship Online

Morality in Design - Peter-Paul Verbeek
DOI: 10.7208/chicago/9780226852904.003.0005
[ethics of design, technological mediations, moral mediations, moralization of technology, nonhumanist ethical approach, design practices, philosophy-in-practice]
This chapter analyzes various implications of the moral significance of technologies for the ethics of design. After a discussion of the implicit and explicit design of technological mediations, the chapter considers how designers could anticipate and help shape the moral mediations of their products. The moral issues raised by the active “moralization of technology” is also discussed here in detail. The chapter then proposes a number of methods designers could use here and points to several examples, with the goal of translating the nonhumanist ethical approach set out in previous chapters into design practices. Rather than proving designers with instrumental tools and a list of issues to deal with when designing a technology, this chapter should be read as philosophy-in-practice, exploring the ways moral questions and issues are articulated in design processes and how designers could deal with the moral significance of the technologies they are designing. (pages 90 - 119)
This chapter is available at:
University Press Scholarship Online

Moral Environments: An Application - Peter-Paul Verbeek
DOI: 10.7208/chicago/9780226852904.003.0006
[fusion of insights, Ambient Intelligence, Persuasive Technology, behavioral sciences, information technology, electronic devices, wireless communication, smart environments]
This chapter applies the approach to the moral significance of technology developed in this book to a field of technology that is rapidly gaining influence in society: Ambient Intelligence and Persuasive Technology. These technologies embody a fusion of insights from the behavioral sciences with advanced possibilities offered by information technology. The ever-increasing miniaturization of electronic devices and the ever-increasing possibilities for wireless communication between appliances have led to the development of so-called smart environments. Such environments register what is happening in a given space and are able to react to this in intelligent ways. Most of the time, the technology at work here is invisible and carefully attuned to human cognitive processes, hence the name Ambient Intelligence. Persuasive Technologies add to this intelligence the ability to influence the behavior of their users in particular directions. (pages 120 - 138)
This chapter is available at:
University Press Scholarship Online

Conclusion: Accompanying Technology - Peter-Paul Verbeek
DOI: 10.7208/chicago/9780226852904.003.0008
[mediation approach, philosophy of technology, ethics of design, limits to technology, interwoven character, technological artifacts, postphenomenological approach]
This concluding chapter reflects on the place of the mediation approach in the broader field of the ethics and philosophy of technology after having elaborated an understanding of the moral significance of technology and its implications for the ethics of design and use. While many ethical discussions of technology focus on the risks and dangers connected to technology and aim to develop criteria for setting limits to technology, this book has taken the interwoven character of human beings and technological artifacts as a starting point for developing an ethics of technology. Connecting to the postphenomenological approach of technological mediation, the book has explored various ways in which technologies and morality are closely intertwined and investigated their implications for the ethics of technology design and use. Technologies help to shape human actions and decisions by mediating our interpretations of the world and the practices we are involved in; therefore, they play a significant role in human morality. (pages 153 - 166)
This chapter is available at:
University Press Scholarship Online