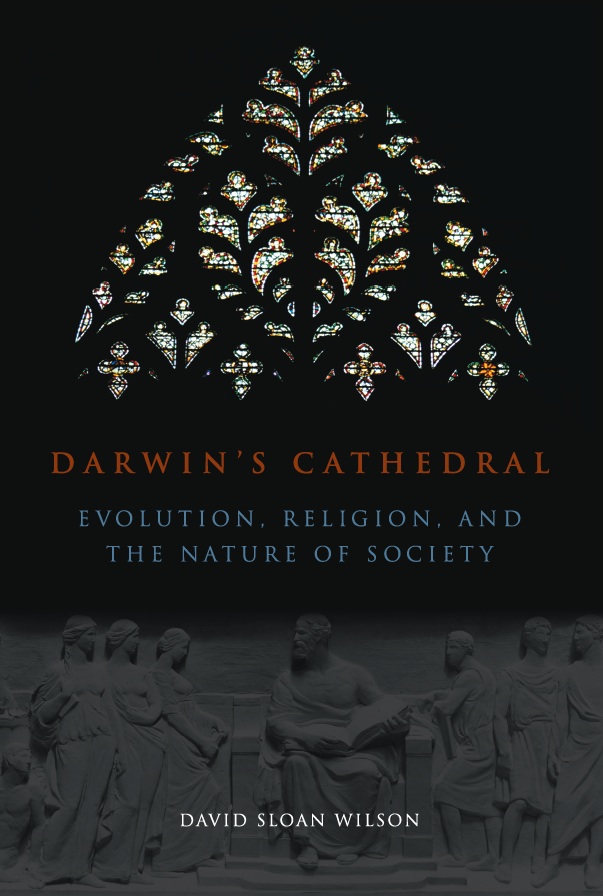 One of the great intellectual battles of modern times is between evolution and religion. Until now, they have been considered completely irreconcilable theories of origin and existence. David Sloan Wilson's Darwin's Cathedral takes the radical step of joining the two, in the process proposing an evolutionary theory of religion that shakes both evolutionary biology and social theory at their foundations.

The key, argues Wilson, is to think of society as an organism, an old idea that has received new life based on recent developments in evolutionary biology. If society is an organism, can we then think of morality and religion as biologically and culturally evolved adaptations that enable human groups to function as single units rather than mere collections of individuals? Wilson brings a variety of evidence to bear on this question, from both the biological and social sciences. From Calvinism in sixteenth-century Geneva to Balinese water temples, from hunter-gatherer societies to urban America, Wilson demonstrates how religions have enabled people to achieve by collective action what they never could do alone. He also includes a chapter considering forgiveness from an evolutionary perspective and concludes by discussing how all social organizations, including science, could benefit by incorporating elements of religion.

Religious believers often compare their communities to single organisms and even to insect colonies. Astoundingly, Wilson shows that they might be literally correct. Intended for any educated reader, Darwin's Cathedral will change forever the way we view the relations among evolution, religion, and human society.

David Sloan Wilson is a professor of biology and anthropology at Binghamton University. He is the author of The Natural Selection of Populations and Communities and coauthor of Unto Others: The Evolution and Psychology of Unselfish Behavior.

"As always, Wilson writes well and clearly and in a stimulating and provocative style. The book is interesting and important, and there can be no higher praise. . . . I applaud the approach taken by Wilson, and I urge you to read Darwin's Cathedral."
— Michael Ruse, Science

"Thoughtful and provocative. . . . Wilson turns to religion, which, he claims, can be explained only by group selection. According to Wilson, a religion is the human equivalent of a pack of lions: by cooperating as a group, people attain benefits beyond their reach as individuals."
— Times Literary Supplement

"What kind of Jekyll-and-Hydra-headed beast is this thing called religious faith? In the view of Wilson . . . a very natural and very powerful beast indeed, and one that helps explain humanity's rise to global dominance. Wilson, a renowned evolutionary biologist, proposes that religion—with all of its institutional, emotional, and prescriptive trappings—ranks as a kind of mega-adaptation: a trait that evolved because it conferred advantages on those who bore it."
— Natalie Angier, New York Times

"Obviously, the main subject of Darwin's Cathedral—religion—is widely contentious. In addition, many of the subjects which Wilson draws to interpret religion—subjects such as group selection, adaptation, hypothesis testing, and how to 'do' science—are contentious among scientists. Discussions of these subjects tend to be partisan, oversimplified, and riddled with misstatements. A great virtue of Wilson's book is the scrupulous fairness with which he treats controversial matters. He is careful to define concepts, to assess both their range of applicability and their limitations, and to avoid posturing, misrepresentations, exaggerated claims, and cheap rhetorical devices. Thus, Wilson's book is more than just an attempt to understand religion. Even to readers with no interest in either religion or science, his book can serve as a model of how to discuss controversial subjects honestly."
— Jared Diamond, New York Review of Books

"This is a rare work of science, both hard and social, that approaches religion from a positive perspective. As such, almost everyone . . . will undoubtedly take issue with it. But is not provocation one of the reasons books are published? . . . . I think this would be a fascinating book to discuss in a book club."
— Herman A. Peterson, Catholic Library World

"By forcing us to consider religious faith as a crucial factor in human evolution, Wilson simultaneously invites us to celebrate the beauty and motivating power of religion."
— Robert C. Fuller, Religious Studies Review

Chapter 1. The View from Evolutionary Biology

Chapter 2. The View from the Social Sciences

Chapter 3. Calvinism: An Argument from Design

Chapter 5. The Secular Utility of Religion: The Modern Literature

Chapter 6. Forgiveness as a Complex Adaptation