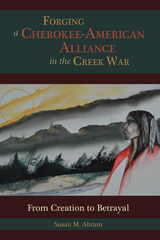 Forging a Cherokee-American Alliance in the Creek War
From Creation to Betrayal
Susan M. Abram
University of Alabama Press, 2015
The Creek War of 1813–1814 is studied primarily as an event that impacted its two main antagonists, the defending Creeks in what is now the State of Alabama and the expanding young American republic. Scant attention has been paid to how the United States’ Cherokee allies contributed to the war and how the war transformed their society. In Forging a Cherokee-American Alliance in the Creek War, Susan M. Abram explains in engrossing detail the pivotal changes within Cherokee society triggered by the war that ultimately ended with the Cherokees’ forced removal by the United States in 1838.

The Creek War (also known as the Red Stick War) is generally seen as a local manifestation of the global War of 1812 and a bright footnote of military glory in the dazzling rise of Andrew Jackson. Jackson’s victory, which seems destined only in historic hindsight, was greatly aided by Cherokee fighters. Yet history has both marginalized Cherokee contributions to that conflict and overlooked the fascinating ways Cherokee society changed as it strove to accommodate, rationalize, and benefit from an alliance with the expanding American republic. Through the prism of the Creek War and evolving definitions of masculinity and community within Cherokee society, Abram delineates as has never been done before the critical transitional decades prior to the Trail of Tears.

Deeply insightful, Abram illuminates the ad hoc process of cultural, political, and sometimes spiritual transitions that took place among the Cherokees. Before the onset of hostilities, the Cherokees already faced numerous threats and divisive internal frictions. Abram concisely records the Cherokee strategies for meeting these challenges, describing how, for example, they accepted a centralized National Council and replaced the tradition of conflict-resolution through blood law with a network of “lighthorse regulators.” And while many aspects of masculine war culture remained, it too was filtered and reinterpreted through contact with the legalistic and structured American military.

Rigorously documented and persuasively argued, Abram’s award-winning Forging a Cherokee-American Alliance in the Creek War fills a critical gap in the history of the early American republic, the War of 1812, the Cherokee people, and the South.
[more]

Tohopeka
Rethinking the Creek War and the War of 1812
Edited by Kathryn E. Holland Braund
University of Alabama Press, 2012
Tohopeka contains a variety of perspectives and uses a wide array of evidence and approaches, from scrutiny of cultural and religious practices to literary and linguistic analysis, to illuminate this troubled period.
Almost two hundred years ago, the territory that would become Alabama was both ancient homeland and new frontier where a complex network of allegiances and agendas was playing out. The fabric of that network stretched and frayed as the Creek Civil War of 1813-14 pitted a faction of the Creek nation known as Red Sticks against those Creeks who supported the Creek National Council.  The war began in July 1813, when Red Stick rebels were attacked near Burnt Corn Creek by Mississippi militia and settlers from the Tensaw area in a vain attempt to keep the Red Sticks’ ammunition from reaching the main body of disaffected warriors. A retaliatory strike against a fortified settlement owned by Samuel Mims, now called Fort Mims, was a Red Stick victory.  The brutality of the assault, in which 250 people were killed, outraged the American public and “Remember Fort Mims” became a national rallying cry.
During the American-British War of 1812, Americans quickly joined the war against the Red Sticks, turning the civil war into a military campaign designed to destroy Creek power. The battles of the Red Sticks have become part of Alabama and American legend and include the famous Canoe Fight, the Battle of Holy Ground, and most significantly, the Battle of Tohopeka (also known as Horseshoe Bend)—the final great battle of the war. There, an American army crushed Creek resistance and made a national hero of Andrew Jackson.
New attention to material culture and documentary and archaeological records fills in details, adds new information, and helps disabuse the reader of outdated interpretations.
Contributors
Susan M. Abram / Kathryn E. Holland Braund/Robert P. Collins / Gregory Evans Dowd /
John E. Grenier / David S. Heidler / Jeanne T. Heidler / Ted Isham / Ove Jensen / Jay Lamar /
Tom Kanon / Marianne Mills / James W. Parker / Craig T. Sheldon Jr. / Robert G. Thrower / Gregory A. Waselkov
[more]